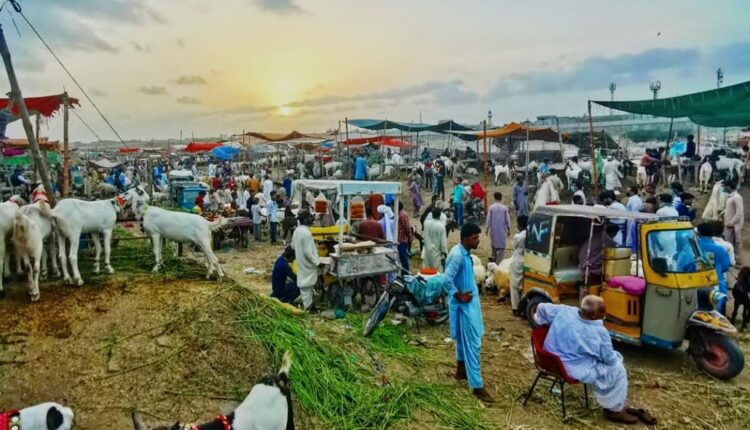 People often question me about the significance behind the celebration of Eid, while Eid Ul Fitr is easy to explain, Eid al Adha gets tricky sometimes.

Often when Eid-al- Adha (Bakra Eid) is around the corner, many critics come forward to jibe at the important ritual of sacrificing goat which happens annually on the 10th day of Zil Hijj, the last month of Hijri calendar. For Muslims like me, Bakra-Eid brings a bundle of questions which often eclipse the joy of the festival. And how every time more often than not, I  not only have to clear my non- Muslim friends’ doubts but also have to come up with the rationale behind this age-old ritual to actually be able to defend it.

When I say unusual Bakra Eid during an unprecedented time like that of lockdown, it doesn’t mean that there will be feasting, lavish parties, gatherings rather there are same contentious questions to answer. And like every time, I tried to explain to them the best way I know, they had some pertinent and rational queries that needed a more scholarly take than I had to offer. To be honest, in a divisive world, it is getting tougher year by year to actually make them comprehend and along the same lines, I fear when people will deter to understand the underlying principle behind the sacrifice. For that situation, I am simply fearful.

Well, what else do you expect from a person who has grown up in a liberal Muslim household, where we don’t educate ourselves, cerebrally, on the rationale behind the Islamic rituals and practices we conduct, and perform it obediently every year like Prophet Ibrahim (PBUH) did? It doesn’t end here, every Islamic practice and ritual has a broader philosophical significance and this is why it is important to understand the rational aspect of Islam to really understand and appreciate it.  What I believe is, in today’s divisive world, it is of prime importance to focus and teach the next generation the cerebral aspect of Islam, the one that literally means peace but what is more important is to tell the world that animal sacrifice isn’t the irony of Islam however, it is an integral part of it.

The ritual of animal sacrifice takes us back to the incident which occurred 4000 years ago, it demonstrates how the sacrifice of a small group of people can create a new beginning of the entire humankind. Wait. That’s not how straight it goes. So, I want everyone to know and learn the significance behind animal sacrifice on Eid ul Adha which isn’t religious act alone rather has spiritual connotations.

●The animal sacrifice instils in us the feeling of kindness and inferiority which serve as a positive motivating force, as it gives the message that nobody is superior to the Almighty and everything belongs to him.

“Eid-al-Adha aka Bakra Eid, the festival of sacrifice, commemorates sacrifices offered by the family of Prophet Ibrahim (PBUH). Prophet Ismail (PBUH), the eldest son of Prophet Ibrahim, was offered for the great sacrifice. Obviously, it was a teaching moment for entire humanity with a clear message that there comes a moment in the life of individuals when they must be prepared to sacrifice the dearest of their resources for the common good of everyone.  The sacrifice offered by Prophet Ibrahim (PBUH) was a clear statement about the belief in one God when idol worshipping was the norm. It was a bold move, and one with a very clear message emphasising to people that no individual, power or authority should be followed in place of God. It was a declaration that authority ultimately belongs to God.”

●The holy book (QURAN) which propagates Peace and harmony, what it says about animal sacrifice? Does it corroborate it as a COMPULSORY ritual?

Eid al-Adha literally means the Eid of sacrifice. Muslims sacrifice an animal on this day which marks a symbolic sacrifice that unequivocally reminds us of the real sacrifice of our negative emotions such as animosity, hatred, negativity and pride throughout our lives. It is important to note that Sacrifice of the animal does not remain confined to physically sacrificing an animal rather on a profound level; it should produce spiritual and positive feelings in a person. One must think that he too has to shed off his negative attitude and other wrong habits for the sake of God. Apparently, the act of animal sacrifice symbolised the sacrifice of one’s own self. In making such a sacrifice, the believer indicates his willingness to forsake everything for God.

About the animal sacrifice, the Quran says: “Their flesh and blood do not reach God: it is your piety that reaches Him.” (22:37) this implies that merely sacrificing the animal without observing the spirit behind this ritual is simply of no use. The practice of sacrifice reflects the basic spirit of the festival and is an expression of dedication, which makes it compulsory for the one, who has got enough purchasing power.

●To every Muslim out there, it’s high time that we must pause and identify the true spirit behind animal sacrifice and perform it with self- righteousness.

In order to sacrifice an animal, it is important for a person to adhere to and adopt the spirit behind this ritual, which is to be spiritual, pious and righteous in life. The last remarks might offend many people who sacrifice to show off their wealth and look for the most expensive and hefty goats. I blame such people because that’s what brings contentious questions. Though, it’s solely on our part that we must vow to comprehend sacrifice’s underlying principle and celebrate it as a festival.

I hope one day we will be able to do that and will propagate the true meaning of Islam through our actions and I also hope that the future world will be more latitudinarian,  especially in standards of religious belief and conduct.

So, let us resolve to continue with all the virtuous deeds which Islam teaches us and let us also make sure that this year’s sacrifice should not be an occasion to go back to our sinful life of Pride, cheating, betrayal et cetera. Because going back to such life after this spiritual sacrifice, only makes us hypocrites.
EID-AL-ADHA MUBARAK!

Indian Politicians and their feeble-minded take on Corona-virus Crisis