by Fahad Tausif
in News, Politics
Reading Time: 2 mins read
A A 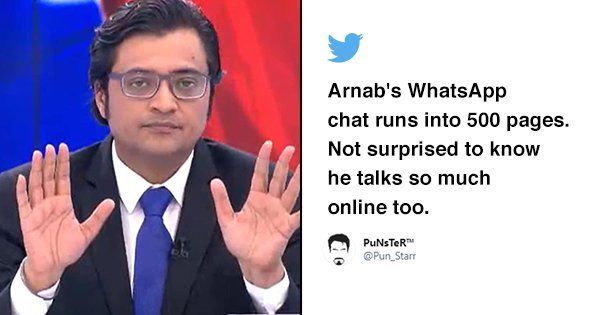 More than 500 pages of  Arnab Goswami’s chat with Partho Das Gupta, EX-CEO of BARC, have been allegedly leaked by Mumbai police.
Arnab was suspected by the Mumbai Police of giving lakhs to the EX- CEO, BARC, to raise TRPs of two Republic media outlets (English & Hindi). He had approached Dasgupta many times to review his channel scores.

These are a few snapshots of the damning leaked WhatsApp chats between BARC CEO & #ArnabGoswami. They show many conspiracies&unprecedented access to power in this govt; gross abuse of his media&his position as power broker. In any Rule of law country, he would be in jail for long pic.twitter.com/6aGOR6BRQJ

Partho Dasgupta had sent a confidential BARC letter to Arnab Gosawali, on 25th March 2019, saying that he had jammed NBA. Partho expressed his fear of Rajat Sharma going after him and asked Mr Goswami to assist via Prime Minister’s Office.

Arnab Goswami assures Dasgupta that PMO will come to aid and he will bring the issue to notice if he meets the Prime Minister, the next day.

Dasgupta Claims TRAI is spreading misinformation regarding the ratings and asks Arnab to remind BJP that he had helped the party on ‘ advertiser story ‘ and ‘MIB’ on multiple issues.

Arnab assures Dasgupta that he will handle the problem.

500 pages of WhatsApp on #TRPScam

In Oct 2019, Pratho briefed pointers for PMO, which Arnab claimed he had already shared.

More than 500 pages of Arnab Goswami's WhatsApp chat has been leaked!

Not only is there clear cut evidence of abuse of power, him being a broker but also the chats reveal how he treats his fellow "journalists" like Navika and Rajat Sharma

Arnab reminded Pratho that he had advanced knowledge of Nripendra Mishra moving out of the prime minister’s office.

The beat seller of the year 2021- chats of #ArnabGoswami

The sheer suddenness of the move ! 😅 pic.twitter.com/SHYz1mZaXl

There are several chat messages in the 500-page leak, that imply Arnab Goswami enjoys a convenient and strong relationship with the ruling party and prime minister’s office. Leak clearly explains why cabinet ministers came in support of Arnab and issued statements to condone his arrest.

After the chats leak, goswami is just a liability for modi.#ArnabGoswami be like 👇 pic.twitter.com/1eBCGjmCtA

Most Anticipated Music Albums of 2021