The violence along the border has injured around 80 officials, including the Superintendent of Police. Home Minister Amit Shah has asked the Chief Ministers of both the states to restore peace in the area.

by Sharmeen Zariwala
in Politics
Reading Time: 5 mins read
A A 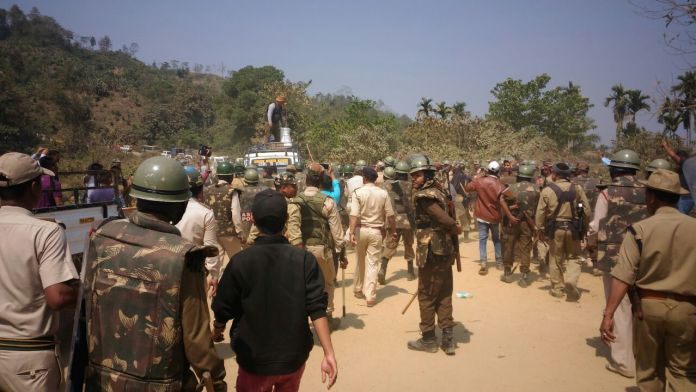 In recent developments about the Assam and Mizoram border issue, a dispute occurred near the border, led to the death of six Assam police, and injured around eighty.

The firing took place on Monday as the miscreants from Mizoram allegedly started firing at the Assam police along the inter-state border of Cachar’s Lailapur.

The Assam officials have stated that the police were deployed along the border to defend the constitutional boundary violated.

Meanwhile, Mizoram Home Minister Lalchamliana and police stated that the firing was a resort to attack by counterparts.

The chief minister of Assam, Himanta Biswa Sarma, tweeted, informing that the violence along the border has led to the death of six officials of Assam police while defending the constitutional boundary and provided his heartfelt condolences to the families of the six officials.

The Union Home Minister of India, Amit Shah, intervened and asked Assam to withdraw its police officials from the border so that the Central Reserve Police Force (CRPF) can take control of the area near the inter-state boundary and restore peace.

Himanta Biswa Sarma wrote on Twitter that the Mizoram police were targeting Assam police using Light Machine Guns (LMG). Adding to this, he said the incident itself shows the gravity of the situation.

Parimal Suklabaidya, who handles the Ministry for Forests, Fisheries, and Excise in Government for Assam, compared the violence to the Jallianwala Bagh incident and countered the claim that Assam police fired bullets first.

Lalchamliana, the Home Minister of Mizoram, said that around 200 Assam’s armed police, along with Inspector General of Police (IGP), Deputy Commissioner (DC), and District/Divisional Forest Officer (DFO), entered Vairengte in Mizoram and at 11:30 am they overran a duty post which was being managed by a Mizoram police personnel.

He also accused the Assam police of assaulting Vairengte residents and bursting tear gases at Mizoram police. The firing took place at around 4:50 pm, and Mizoram officials responded to the firing by the Assam officials, said Lalchamliana.

Adding to this, he also said he regrets the injuries which both the parties had to endure and said that he hopes the inter-state border dispute between Mizoram and Assam will be resolved and an atmosphere of peace and understanding will be created.

The violence on Monday also caused a brawl at several points along the inter-state border, including Cachar and Hailakandi districts.

The Assam government had accused Mizoram of constructing a road while destroying the Reserve Forest in the Lailapur area. Mizoram responded to the allegation by blaming the Assam Police.

They stated that the miscreants in Mizoram attacked them, which led to the violence in which the Superintendent of Police was also injured.

Congress leader Rahul Gandhi accused the Home Minister, Amit Shah, of failing to control the violence that has exacerbated the border dispute between Assam and Mizoram.

On his Twitter account, the former Congress chief provided heartfelt condolences to the families of those who lost their lives in the conflict and stated that the Home Minister had created an environment of distrust among people, which has adverse consequences.

Trinamool Congress member Abhishek Banerjee expressed that such incidents in Indian democracy are alarming and can lead to the death of democracy.

Congress member Gaurav Gogoi submitted an adjournment motion in Lok Sabha, asked the house to discuss the border issues, demanded an inquiry into the matter, and reported the number of light machine guns used during the clash.

The tensions between the two were building since last month when the Assam police allegedly overtook the area of Lailapur.

They had also accused the Mizoram government of encroaching on the territory, the boundary conflict escalated, which required central intervention twice.

Last year, on July 10, the issue resurfaced after an IED was launched at Assam government officials visiting the border. Assam and Mizoram share a border of 164.6 km, and since 1995, several rounds of talks were held by both the party and the officials to resolve the dispute.

The area has seen security forces, local community, and other forces intervention. The Mizoram government has set up a commission body to work on the pact of border demarcation.

The dispute between the two states originated in 1875, which led to the differentiation of Lushai Hills from Cachar.

In 1933, the boundary was further demarcated between Lushai hills and Manipur. The state of Mizoram accepts the inner-line reserve forest stretch, which spans 509 sq. miles.

The notification was issued under the Bengal Eastern Frontier Regulation in 1873. Meanwhile, Assam is firm on only accepting the map drawn in 1933.

Mizoram has resented the 1933 map and stated that the state was not made aware of such provision.

The border issue has given rise to many allegations, including the allegation of Assam officials compromising the territory of Mizoram and vice versa.

Deadly Heatwaves To Be A Trend, Says Study