Non-Complacency should be followed in the Covid-19 management: Prime Minister to the cabinet

The Prime Minister informed the cabinet minister that they should urge people to follow social distancing and wear masks. 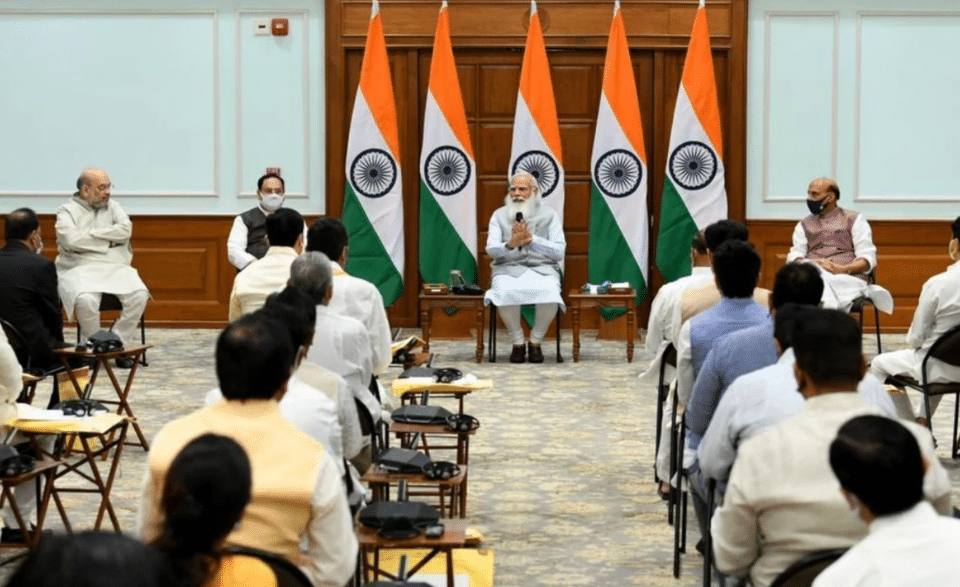 Prime Minister Narendra Modi held a meeting with the newly formed council of ministers. He informed that the situation of Covid-19 in India is crucial and complacency should not be practiced.

The Prime Minister has asked the ministers to remind people to follow social distancing and make sure masks are worn.

He also mentioned an instance where people were not following social distancing and many people gathered without wearing a mask. He called the incident unpleasant and asked the ministers to keep a tab on the Covid-19 protocols.

He stated that the vaccine has been steadily increased and the testing has been high in many states. The efforts by our frontline workers against the pandemic, along with the government, are essential to fight the Covid-19 pandemic.

A single mistake can have repercussions, which can lead to the entire country suffering, said the prime minister. He expressed concerns with the rise of the Covid-19 cases in Maharashtra and Kerala and cautioned the ministries to stay alarmed as the new mutations of the virus are resulting in a spike in cases in many countries.

The central party had been a subject of criticism over its handling of the second wave of the Covid-19 pandemic. Following the cabinet reshuffle, the Union Health Minister, Harsh Vardhan, had submitted his resignation, leading to the appointment of Mansukh Mandaviya for the position. In a series of tweets, Congress member P. Chidambaram stated that the resignation of the Union Health Minister reflects the mismanagement by the Modi-led government in handling the Covid-19 pandemic.

In a Twitter thread, he criticized the former education minister, Ramesh Pokhriyal, who was replaced by Dharmendra Pradhan. He stated that the National Education Policy (NEP) introduced in 2020 was criticized by educationists, scholars, and teachers.

Swaminathan Aiyar, the Consulting Editor of the Economic Times, stated that the cabinet reshuffle raised questions as to why prominent ministers were asked to go. He stated that the government was hoping to bring new faces to the party.

However, that raises a question on why prominent ministers including IT minister Ravi Shankar Prasad, were asked to resign. He even asked what new opportunities are expected from the replacement of the ministers, who are relatively young in the experience as compared to the predecessor.

Also Read:  Cabinet Reshuffle: A List Of Who Got Which Portfolio

Human-Animal Strife, One Of The Greatest Threats To Wildlife: WWF And UNEP