As the movement crosses its two-month strife towards the complete withdrawal of the farm laws, here is a timeline of the significant events that had taken place throughout the agitation by the farmers. 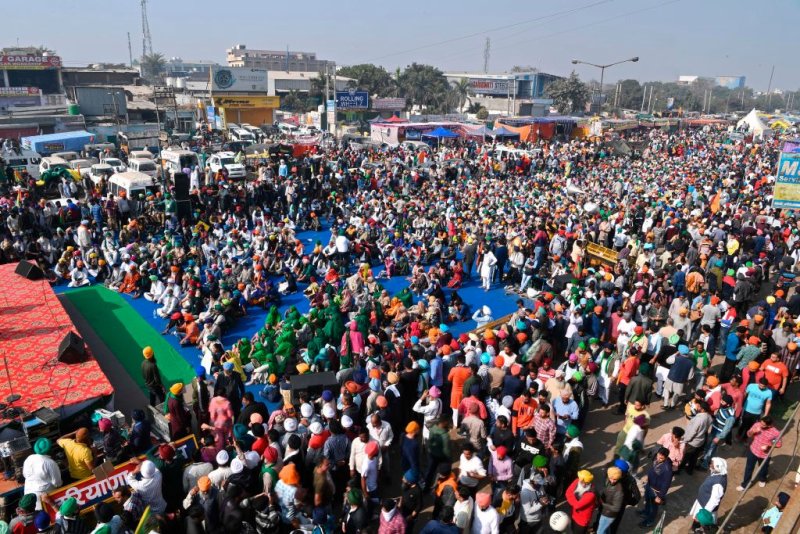 The farmers’ movement has entered its 65th day at the national capital borders, where the farmers have been protesting against the three contentious farm laws brought by the Central government. Although the violence during the Republic Day tractor rally by the farmers had seemed to weaken the movement, renewed strength and agitation has been witnessed since the past few days on Delhi’s borders.

As the movement crosses its two-month strife towards the complete withdrawal of the farm laws, here is a timeline of the significant events that had taken place throughout the agitation by the farmers.

Nov. 5, 2020: Around 22 farm unions across 22 states organised a nationwide road blockade against the new farm laws bulldozed in the parliament that introduces contract farming with big corporates, removes Centre’s power to impose stock holding limits and provides farmers with the liberty to sell their products anywhere outside the mandis.

Nov. 25, 2020: After being protesting locally for several weeks and going unheard and uncovered, farmers from Punjab and Haryana decided to march towards India’s capital Delhi, in what they called a “Delhi Chalo” march, asking other farmers and supporters to join in.

Nov. 26, 2020: Farmers approaching Delhi were met with water cannons and tear gas by the police at the Haryana-Delhi border. Besides, some reports show that the Haryana government had dug trenches on the roads leading to Delhi to potentially stop farmers travelling on tractors to reach the capital.

National Highway has been dug up just to stop farmers from reaching Delhi.

Nov. 27, 2020: A ground in Burari, Delhi was allocated for the farmers to carry out the protest, however, they refused to condense their protest to any site other than what they had been demanding. In defiance of the police permission, farmers set up their camps on the highways of Delhi border.

Nov. 28, 2020 : Home minister Amit Shah offered to hold talks with the farmers, asking them to vacate Delhi borders and move to the designated protest site in Burari. The offer was rejected as farmers refused to move anywhere except at Delhi’s Jantar Mantar.

Dec. 1, 2020: First round of meeting between farm unions and the Central government was held but it remained inconclusive.

Dec. 2, 2020: Meanwhile, Canadian prime minister Justin Trudeau had described the situation as “concerning.” In response to which the Modi government called out Trudeau’s comments “unwarranted.”

Dec. 3, 2020: Another marathon eight-hour meeting between the government and farmer union heads ended in a deadlock.

Dec. 4, 2020: Meanwhile, the protests on the borders had gained attention for its sustenance, showcasing that the farmers are in for a long haul. The farmers had claimed that they were prepared to carry the protest till their demands are not met and have enough arrangements done to sit at Delhi’s borders indefinitely. Many protestors had customised their tractors into house compartments with various facilities to navigate through the biting cold weather.

Dec. 8, 2020: Farmers had now called for a nationwide shutdown and demanded a complete withdrawal of the three contentious farm laws. The call for ‘Bharat Bandh’ gained support from many opposition parties and trade unions, across India, especially in Punjab and Haryana. Meanwhile, another meeting between the Home Minister and farmer union leaders failed to achieve any significant breakthrough.

Dec. 9, 2020: Criticising the new farm laws as an attempt towards corporation of agriculture, leaders of farmer unions called for the boycott of services offered by the businessmen Gautam Adani and Mukesh Ambani.

Dec. 11, 2020: Bharatiya Kisan Union, one of the farmer bodies, moved the supreme court against the three farm laws.

Dec. 16, 2020: The Supreme court held that the laws should be kept on hold meanwhile, an independent committee should be appointed to further to consider recommendations from both the parties and bring forth a solution.

Dec. 22, 2020: More than 35 social, political, farmer organisations, and trade and labour unions hold a peaceful protest in Mumbai to lend support to the protesting farmers.

Dec. 30, 2020: Developments were shown in a  round of talks between the government and farm union leaders when the former agreed to do away with the penal provisions against farmers in an ordinance related to stubble burning and to put on hold a proposed Electricity Amendment Law.

Jan. 4, 2021: Reliance Industries, owned by Mukesh Ambani on the other hand, said it will never enter contract farming. Meanwhile, another meeting between the farmers and the government ended in a deadlock as the union leaders continue to demand the withdrawal of the three farm laws.

Jan. 11, 2021: The Supreme Court questioned the centre over its handling of the farmers’ protest, putting on hold the implementation of the three farm laws. It had also set up a committee to evaluate any changes to the laws, giving it a two-month deadline.

Jan. 15, 2021: Another round of talks between the farmers and the government ended in a deadlock.

Jan. 20, 2021: In one of the significant developments out of yet another round of talks. The central government proposed to suspend the three farm laws for one-and-half years and set up a joint committee to discuss the legislation. The farmers, however, rejected the proposal and continued with the protest demanding the complete repeal of the farm laws.

Jan. 22, 2021: The government, meanwhile, hardened its stand saying that the next meeting will be held only after the farmers have agreed to further discuss the suspension proposal.

Jan. 24, 2021: The Delhi police allowed farmers to hold a tractor rally in the national capital to commemorate the completion of two months of their protest. The permission, however, was limited to a fixed route within the city.

Jan. 26, 2021: in the midst of the tractor rally, chaos unfolded when a group of farmers diverted from the permitted route. Again, tear gases were used by the Delhi police in an attempt to stop the farmers, but the situation soon turned violent from both sides.

A protesting farmer also died in the violence, who the farmers alleged to be shot at by the Delhi police. However, any such allegation was dismissed by the police who claimed that the man died after his tractor toppled while he was trying to break through the barricades.

Violence intensified between the farmers and the police after a group of protestors reached the Red Fort and breached the monument’s security. Flags from different farmer unions and the Nishan Sahib flag were hoisted from the ramparts of the fort. 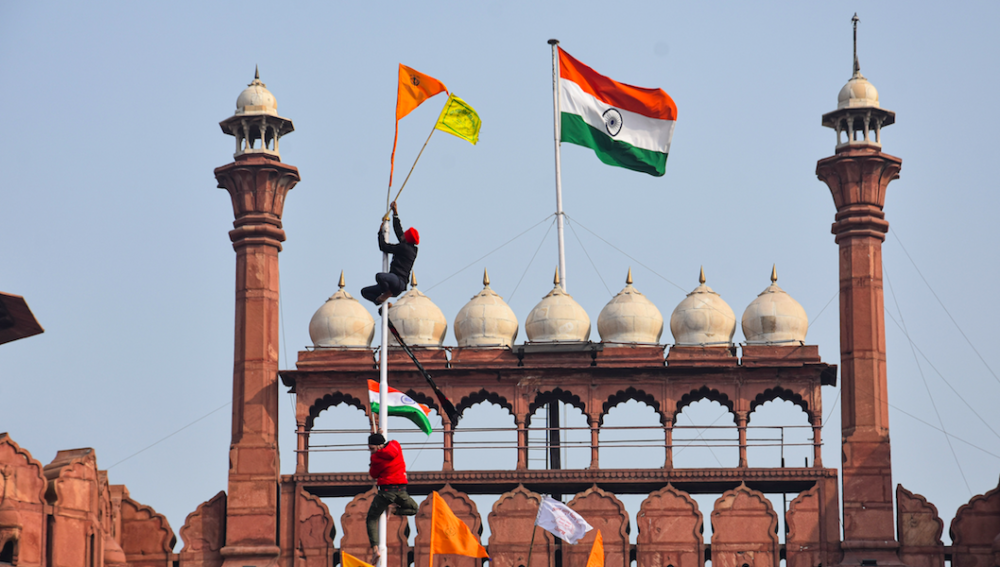 The leaders of Samyukt Kisan Morcha (SKM), a union of the protesting farm unions, disassociated itself from the violence claiming that some “anti-social elements” had infiltrated the peaceful rally. Following the violence between the protesting farmers and the police, Amarinder Singh, Chief Minister of Punjab, urged the farmers to leave Delhi and return. He also emphasised that “genuine farmers” were not involved in the violence.

Jan. 27, 2021: Two farm unions had withdrawn their support from the protest, whereas, SKM stated that these organisations were not part of the umbrella body and declared that the protest against the three contentious farm laws will further continue till they are repealed.

Following the violence on Republic Day, Delhi police filed 22 FIRs against farmer leader Rakesh Tikait and others in connection to the violence.

Jan. 28, 2021: Meanwhile, the leaders of the protesting unions called off their march to the parliament with a couple of other farm unions from Uttar Pradesh—Bharatiya Kisan Union (Bhanu) and Rashtriya Kisan Mazdoor Sangathan—ended their protest to dissociate themselves from the agitation. Later that day, the Uttar Pradesh police forcefully removed the protesting farmers sitting on the Delhi-Saharanpur highway.

Jan. 29, 2021: Farm Leader Rakesh Takait appealed to the farmers to lend support to the agitation which resulted in bringing thousands of them together at the Muzzafarnagar ‘Mahapanchayat’. Meanwhile, social activist Anna Hazare announced an indefinite fast at his hometown in Maharashtra’s Ahmednagar from Jan. 30, which was later called off.

Jan. 30, 2021: Internet remained shut in Delhi’s Singhu, Ghazipur, Tikri borders and its adjoining areas from 11 pm of January 29 to 11 pm of January 30, with heavy security deployments in those areas.

Although post violence on Republic Day, the farmers’ agitation and protest has evidently weakened, however since January 28, under the leadership of Rakesh Takait, the protest site has seen an estimated crowd of 10,000 people, with some political leaders visiting and expressing solidarity with the farmers’ movement.