The Patidar quota agitation leader has been praising the BJP's decision-making capacity and institutional style while harshly criticizing the Congress leadership for a while now. 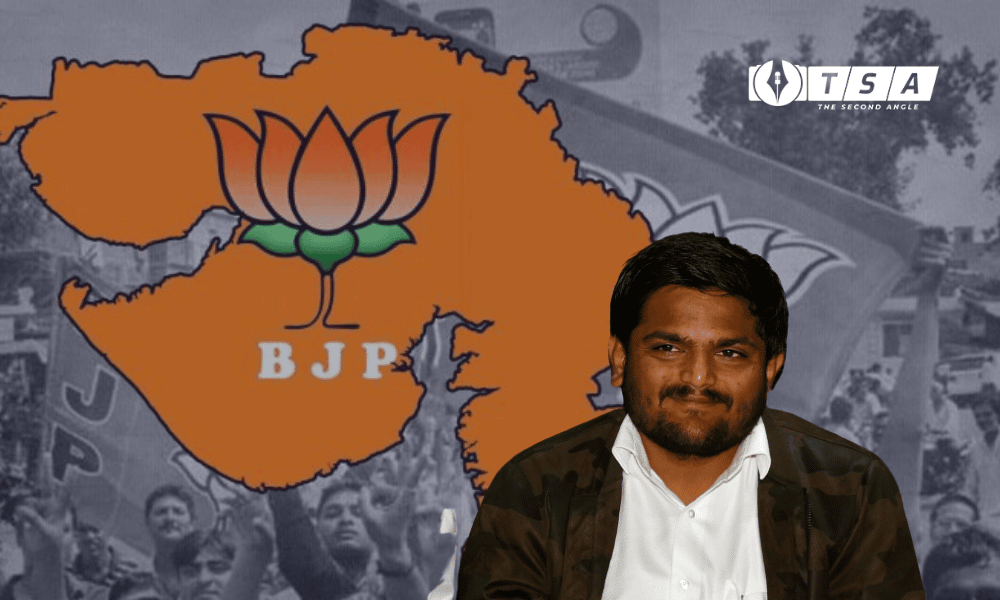 Patidar leader Hardik Patel has confirmed that he will join the ruling Bharatiya Janata Party (BJP) on June 2, ahead of the Gujarat Assembly election later this year, according to news agency ANI. Patel while openly denouncing the Gujarat Congress’s operation in April, stated that his options were always open. He had also lavishly praised the ruling BJP’s leadership for its “terrific decision-making.” However, he denied any intention of leaving Congress at the time.

In an interview, Patel praised the BJP for decisions such as the repeal of Article 370 in Jammu and Kashmir and the construction of the Ram Temple in Ayodhya, adding that he’s also a “proud Hindu.”

This is a boost for the saffron party ahead of the Gujarat Assembly elections in 2022. After leaving the Congress, Patel accused the party’s leadership of making derogatory remarks regarding “Hindus and Lord Ram.” He recently resigned from the Congress party, and speculations were already high about him joining the BJP.

After leaving the Congress, Hardik Patel began targeting the party. He claimed that the Congress has harmed Hindu sentiments by opposing the Ram Mandir. “I had said earlier also that the Congress party works to hurt people’s sentiments. They always try to harm Hinduism’s faith. Today, a former Union Minister and Gujarat Congress leader claimed that dogs urinate on the Ram Temple’s walls,” he tweeted.

On May 18, Patel decided to quit the party, claiming that Gujarat Congress leaders were more concerned with ensuring that leaders travelling from Delhi to Gujarat received their chicken sandwiches on time. In July 2020, he was appointed to the position. Patel’s main complaint was that, despite being the working president of the state unit, he was never given productive work.

Patel resigned from the Congress in May, writing a derisive letter to party leader Sonia Gandhi wherein he launched an all-out strike on the Gujarat Congress unit and top brass.

Patel wrote in his resignation letter that the Congress only served as a roadblock on certain key issues in the country and was merely reduced to opposing everything. He claimed that the Congress was a stumbling block on a number of issues, including the Ram Mandir in Ayodhya, the repeal of Article 370 in Jammu and Kashmir, and the implementation of GST. He recently praised the BJP for its stance on these issues.

The BJP retained power in the Gujarat assembly elections of 2017, but the seat tally fell to 99 from 115 in 2012, whereas the Congress won 77 seats, an increase of 16 seats in the 182-member House. Hardik claims that the Patidar quota agitation led by him, clearly aided the Congress Party in the 2017 Assembly elections. He further claimed that despite being made working president, he was not given any responsibility. He wasn’t even invited to the party’s key meetings, and never scheduled his press conference over the last three years.

In 2020, the Patidar leader, who joined the Congress in 2019, was appointed one of the Gujarat Congress working presidents. According to the influential Patidar leader, despite his constant efforts to orient the Congress on the appropriate path, the party has been working against the best interest of the country and society.

Between 2015 and 2018, at least 30 FIRs were filed against Hardik Patel. Seven of these cases were filed in 2015, with Hardik Patel facing charges in several cases involving the Patidar community, the demand for quotas in government jobs and education, riots during the Gujarat agitation, and sedition. At the same time, Hardik Patel claims that 23 cases are pending against him.

At the moment, Hardik Patel is facing court proceedings in 11 separate cases. Two cases involve treason. The remaining cases have been withdrawn by the state, dismissed by the Gujarat High Court, or even no proceedings have begun.

Also Checkout: What Future Does The Alliance With Twenty20 in Kerala Hold For AAP?

5 countries you can travel to without a Visa