Jwalit Mehra, warned all the bookstores in Ahmedabad that are stocking objectionable material that hurt the sentiments of Hindus, next time, their shops will be set on fire.

by Sharmeen Zariwala
in Politics
Reading Time: 2 mins read
A A 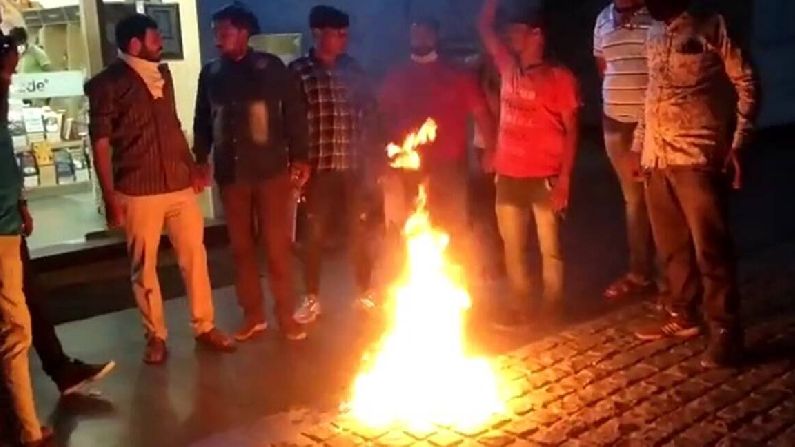 The youth members of the Vishwa Hindu Parishad group, Bajrang Dal, burned a copy of the ancient Sanskrit book, ‘Kamasutra.’ The Hindutva group members burned the copy of the book outside the store it was sold at. They claimed that the book represented deities indecently.

Videos of the workers burning the Sanskrit Text are going viral on social media where workers are heard saying “Jai Shri Ram”, and “Har Har Mahadev.”

In the video, the workers of the Bajrang Dal are shown entering the Latitude bookstore, and showing to the camera the Illustrations depicting Hindu deities in ‘vulgar positions’.

The Indian Express reported that the incident took place on August 28, at the Latitude bookstore located near the Sarkhej-Gandhinagar Highway. The North Gujarat Bajrang Dal chief mentioned to The Indian Express that they received a complaint about the objectionable and inappropriate depiction of Lord Krishna in the Kamasutra book. Netizens of India are criticizing the hypocrisy of the Bajrang Dal for burning an ancient scripture.

Jwalit Mehra, a member of Bajrang Dal warned all the bookstores in Ahmedabad that are stocking objectionable material that hurt the sentiments of Hindus, next time, their shops will be set on fire. The reports of Bajrang Dal burning the text is going viral. However, it is not known if they conducted the act forcefully. They also threatened the shop owner to burn the bookstore if the sale of the book continues.

A similar complaint was registered in 2017 when members of Bajrang Dal approached the Chhatarpur Police Station against the sale of the Sanskrit book at the premises of Khajuraho temple.

Kamasutra was written by Vatsyayana, a Vedic philosopher in the third century. Many experts have claimed that the uniqueness of the book doesn’t lie in the love, fulfilment and sex represented in the book, but it also ignores the much-rooted caste system.

Scholar Wendy Doniger agrees with the notion. In her book, Beyond Dharma: Dissent in the Ancient Indian Sciences of Sex and Politics, she mentioned in contrast to all the shastras, the Kamasutra ignores the caste and class system on a large scale.