‘One Nation, One Election’: Modi’s masterstroke to a vibrant democracy?

Have you been giving attention to the words 'One Nation, One Election'frequently these days? That’s because there is a suggestion to conduct the elections to the Lok Sabha and State assemblies at the exact time.

by Mantasha Naseem
in Featured, Opinion, Politics
Reading Time: 3 mins read
A A 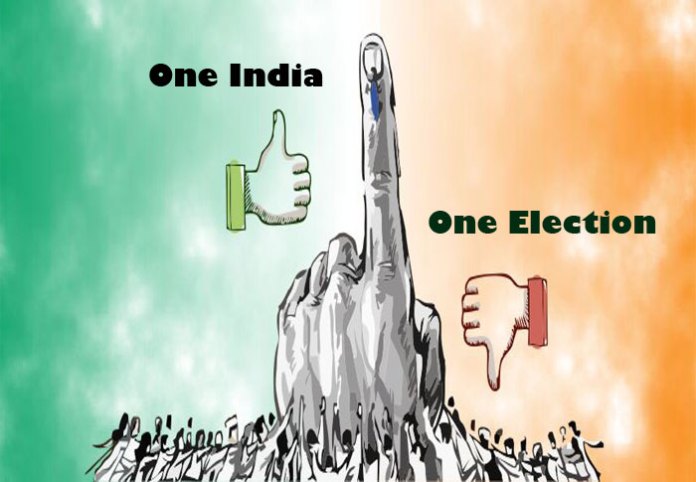 The push for “One nation, one election” came from Prime Minister Narendra Modi in 2016. After that, there have been extensive debates on keeping simultaneous polls, with the ruling Bharatiya Janata Party bringing in a strong pitch for it.

Prime Minister Narendra Modi on Thursday again put forward the same pitch for “One Nation, One Election” and a solitary voter list for all polls to avoid the impact of the model code of conduct on development works every few months due to frequent spread-out polls.

“Every few months, we see an election in some part of the country. You all know what the impact of these polls is on the development works. There is a need for a deeper study and discussion on the issue and I suggest presiding officers may lead such discussions, ” said Modi.

Attending the concluding session of the 80th All India Presiding Officers Conference via video conference, Modi also paid tribute to the victims of the 26/11 Mumbai attacks and acknowledged that India is fighting terrorism now with a new policy and new process.

According to the Prime Minister, “Our Constitution has many characteristics but one very special detail is the importance given to duties. Mahatma Gandhi was very keen about this. He saw an intimate link between rights and duties. He felt that once we perform our duties, rights will automatically be safeguarded”.

He further referred to the method of KYC (know your customer) in the corporate world and said there should be an identical KYC drive in the shape of Know Your Constitution to popularize the Constitution and its various features.

The All India Presiding Officers Conference started in 1921, and the Gujarat event marks its centenary year.

The principle for this year’s meeting is ‘Harmonious Coordination between Legislature, Executive and Judiciary- Key to a Vibrant Democracy’.

So what are simultaneous polls?

Presently, elections to the state assemblies and the Lok Sabha are held individually — that is whenever the incumbent government’s five-year term ceases or whenever it is discontinued due to various reasons.

But the idea of “One Nation, One Election” proposes a system where elections to all states and the Lok Sabha will have to be carried out simultaneously. This will encompass the restructuring of the Indian election cycle in a way that elections to the states and the centre synchronise.

What is the background?

Concurrent elections are not fresh to India. They were the criterion until 1967. But pursuing abolition of some Legislative Assemblies in 1968 and 1969 and that of the Lok Sabha in December 1970, elections to State Assemblies and Parliament have been held individually.

The notion of reverting to concurrent polls was mooted in the annual report of the Election Commission in 1983. The Law Commission’s Report also pertained to it in 1999. It all started again, back in 2014, Lok Sabha polls in the BJP manifesto. After that Mr. Modi fluttered the idea once again in 2016, the Niti Aayog formulated a working paper on the subject in January 2017.

In the working paper that the Law Commission brought out in April 2018, it said that at least “five Constitutional recommendations” would be required to get this off the ground. “ One Nation, One Election” was also a part of the 2019 Lok Sabha election manifesto of the Bharatiya Janata Party (BJP).

Why do some support?

What are the arguments against it?

Which countries have simultaneous elections?

The Law Commission of India’s suggestions of simultaneous elections tabled in 2018 precisely drew from countries like Sweden, Belgium, and South Africa.

In Sweden, elections for county and municipal councils take place in the team with the country’s general elections (Riksdag elections) every four years. Nearly, similar to Sweden in South Africa where national assembly, municipal council, and provincial legislative elections are also held concurrently every five years.

Other examples include the Philippines, Costa Rica, Bolivia, Guatemala, and Germany.