Indian politicians have always been in the limelight for not attaining complete education yet, holding posts which require much of a responsibility. From faking degrees to unupdated curriculum details, they had them all while governing India. Let's look at 10 of the most prominent faces in the Indian Politics who are School Dropouts. 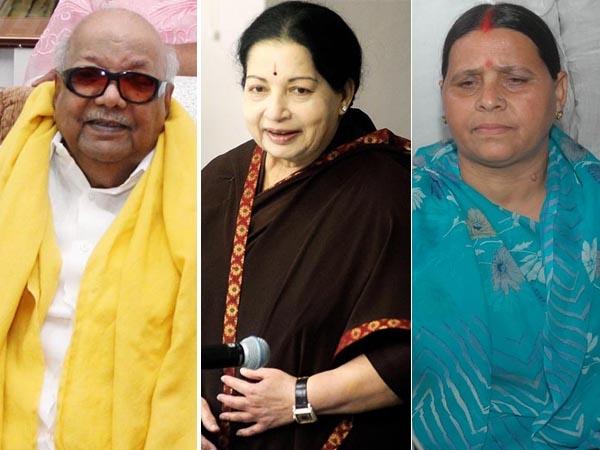 Politics is all about understanding people and represent their say in the system of governance. As Indian politics have no minimum criteria of academic education qualification for those who hold the power in government. It’s strange in its own way that the very people who have never seen education to the whole in their lives, are elected for responsible roles in our country.
TSA brings you the 10 Politicians who didn’t even complete their schooling yet Governed India :

Rabri Devi has served as the Chief Minister of Bihar for three terms between 1997 to 2005. Wife of veteran Politician Lalu Prasad Yadav, Rabri Devi was dragged into politics to take the post of CM of Bihar in place of his husband Lalu Yadav who couldn’t continue his term in power due to facing arrest warrant in corruption charges. She was married at a very young age of 14 and have approximately no academic qualification. Her appointment as the Bihar Chief Minister made several controversies as Rabri Devi has no educational qualification or direct investment in politics.

Former Tamil Nadu Chief Minister and DMK head, Late Muthuvel Karunanidhi had an impactful and extended investment in Indian Politics. However, having great oratory and writing skills, Karunanidhi dropped out of school in 10th standard to start working as a screenplay writer in Tamil Film Industry. Karunanidhi used to write poems and books and was stated as Kalaignar (artiste) by his supporters. Despite having only mere academic education, he has been notable in Tamil Films and Literature with for his contribution in writings.

Jagannath Mahto is the Education and Literacy Minister of Jharkhand state. The 53-years-old MLA has faced criticism for his education qualification for being just 10th passed after he was appointed as State’s Education Minister earlier this year. However, to remove this blot from his post, Mahto applied for admission as an Intermediate Arts student in Devi Mahto Inter College, Nawadih which was set up by himself back in 2006.

Former Cheif Minister of Madhya Pradesh, Uma Bharti had been politically active with Bhartiya Janata Party for decades now, often serving as Member of Parliament and handling various State and Union ministries during her political career. She dropped out of school only after having formal education till the sixth standard.

Tamil Nadu’s former Chief Minister and a much-celebrated politician Late. J Jayalalitha was called ‘Amma’ by her supporters. She used to be a bright student in schools and also got scholarships to continue her higher education but, quit education mid-way to start her acting career. Jayalalitha’s debut in Tamil cinema was the leading role in the movie Vennira Aadai (1965) at an early age of 17.

A former minister in the cabinet of Punjab government who held important offices as the Minister for Animal Husbandry, Dairy & Fisheries as well as Welfare of SCs and BCs between 2007-2017. Additionally, he also served as Minister of Sports and Youth Services from 2007-2012. Gulzar Singh Ranike has only completed his elementary education.

Former Deputy Chief Minister of Bihar and the current face of Rashtriya Janata Dal, Tejaswi dropped out of school in 9th standard to pursue his career as a Cricketer. He played first-class cricket for Delhi and was part of IPL franchise Delhi Daredevils. Tejaswi had been into politics since 2015 after quitting Cricket and have well-nourished under his father to be an impactful political face. Under his leadership, RJD stood out to become the biggest single party in recent Bihar Elections.

Anant Geete has served several ministries in the Union Government in his more than the two-decades-long political journey. Former Union Cabinet Minister for Heavy Industries and Public Sector Enterprises, Shiv Sena’s senior member Mr Geete has also held the post of Union Cabinet Minister of Power as well as Union Minister of State, Ministry of Finance, Banking and Expenditure in the early 2000s. However, his educational qualification is reported to be 10th passed as he didn’t pursue higher education after that.

One of the senior-most member of Congress Party who also served as Railway Minister of India from 1991 to 1995. Late. Kareen Jaffer Sharief started as a driver with Congress President S. Nijalingappa and later joined politics. He only completed his education till matriculation.

Veteran politician Lalu Yadav’s eldest son, Tej Pratap entered politics in 2015 along with his brother Tejaswi, after being elected as MLA from Mahua constituency. He also held the Ministry of Environment in Bihar cabinet of Nitish Kumar’s Government till 2017. However, official documents say he has completed his studies till intermediate level but according to reports he also dropped out of the school in 9th standard only. Another goof is despite being Lalu Yadav’s eldest son, on official papers he is younger to his brother Tejaswi.

The education qualification is yet to be considered mandatory for political affairs and holding ministries in India. According to an analysis, at least 40% of the minister are either school dropouts or educated only up to school level.

For more such articles follow our Listicles Section
Read: 11 Bollywood Male Artists who deserve our appreciation