by Puneet Chopra
in News, Politics
Reading Time: 2 mins read
A A 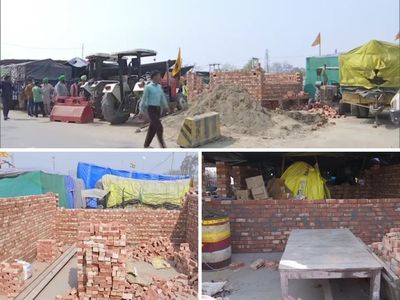 Preparing for a long haul, farmers protesting against the centre’s three farm laws since November last year have now started building houses at the Delhi borders.

For 110 days camping at the Singhu border, the Protest area has transformed into a mini-village or a ‘Pind’ by farmers. After salons, libraries, make-shift gurudwaras and gyms, brick houses and bamboo houses and shed houses have now come up at the site.

Tractors and trolleys were temporary shelters for the protesting farmers during the early days of the protest, but they have now been replaced with ‘pucca’ houses. Mosquitoes in the night and the scorching sun during the day is said to be the reason for the construction. Also as harvesting season came the tractors and trolley are needed in farms too.

After internet shutdowns, the fortification at borders, denial of water and electricity in the harsh winters, farmers are all set to intensify their protest against the three agri laws.

Farmers can be seen constructing houses on their own at the Tikri border near Haryana which is costing them around Rs 20,000 to Rs 25,000. The price of construction material is being borne by the farmers as they are saving the cost of labour by building the houses themselves, reported NDTV.

The Kisan Social Army is leading this new initiative of farmers to prepare a shield against the hot wave in the national capital.

Anil Malik, a member of Kisan Social Army, said, “These houses are strong, permanent just like the will of the farmers. 25 houses built, 1000-2000 similar houses to be built in coming days.”

Earlier, to tackle water scarcity at the borders, farmers had dug their own borewells.

Many were forced to defecate in the open When the government had cut access to public toilets. Women protesters were forced to walk kilometres to find a safe place or go to nearby fields.

Farmer unions have called for a Bharat bandh on March 26, marking four months of their protest. Farmers along with trade unions will protest the hike in fuel prices and privatisation of railways on March 15.