Qualcomm Snapdragon 765G vs 855 vs 865: How do the different Qualcomm chips stack up

In this article, we will be looking at the differences in CPU, GPU, and features of Snapdragon 765G, 855, and 865. So, that you can make an informed decision on your next phone purchase.

A plethora of devices has been launched this year, containing the above-mentioned chips. This has created a lot of confusion too as to which phone to buy. Well, I am here to make your life easier and tell you which chip is better.

A rising tide raises all boats. Rising Tide here refers to the CPU, meaning a faster CPU will enable faster memory, faster GPU, better image processing, etc. So, CPU plays a key part in phones. All three processors use big.LITTLE architecture. It refers to the use of low power cores with high-performance cores to get the best of world efficiency and power.

Going by the CPU configuration it is clear that SD765G prioritizes efficiency over performance and will give the best battery life and also remain the coolest (temperature) among the three.

The SD855 and SD865 have the same CPU configuration with similar clocks, the difference is that SD865 uses the latest Cortex A-77 CPU which provides +20% better single-core performance than Cortex A-76 CPU.

GPU means the graphics processing unit, it handles the processing of all your games, apps and with the emergence of high refresh screens, they have become more important in UI too. A weak GPU won’t be able to run your phones smoothly and will cause stuttering and tearing.

Adreno 620 is an upper mid-range GPU. Despite being impressive in its category, it’s no match for Adreno 640 and Adreno 650. You can easily expect the phone to do your daily tasks without any problem. However, the only area you may feel SD765G lagging is in gaming, if you set the graphic settings to low-medium you will be able to play games at acceptable frame rates.

Adreno 650 offers a significant bump over Adreno 640, with performance improvements up to 50%. SD865 will support 144Hz displays whereas SD855 is limited to 120Hz. Both the GPU is extremely powerful and PUBG Mobile has rolled out a 90FPS update for both the processors too. However, with some mods and tweaks, you can increase it to 120FPS.

Enough said about the on-paper specs. The real test is if all the talk and claims of improvements give any difference in real-world performance.

Moto Razr 5G India launch: Everything you need to know…

The Single-Core performance of SD 765G is very respectable and anything above 500 is pretty good. However, the performance of SD 855 and SD 865 is in a league of their own, with the SD 865 being more powerful than SD 855. This result also aligns with my analysis of the CPU configuration. The reason for SD 865 edging out SD 855 is the more powerful Cortex A-77 CPU. The SD 765G lags significantly because it uses 1 speed binned core and 1 performance core, therefore its priority is efficiency over performance. 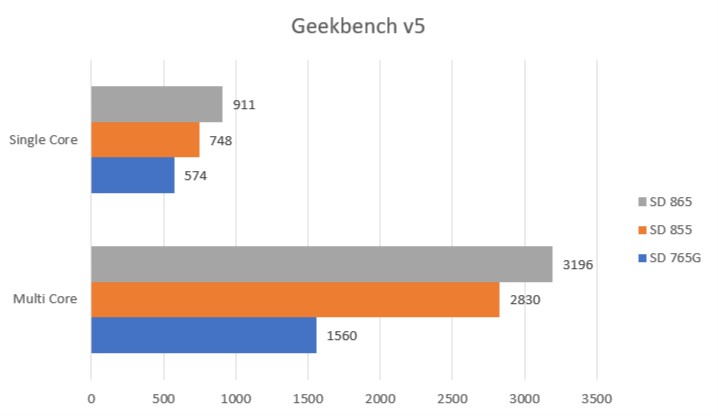 The results in this benchmark are pretty clear cut. This benchmark mainly focusses on GPU. SD 865’s GPU is a significant improvement over last year’s SD 855 and the only thing holding it back is SD 765G. You see developers need to support the lowest denominator, which here is the SD 765G. If the SD 765G GPU was just as capable as SD 865, you could see console-level graphics become a reality on phones. 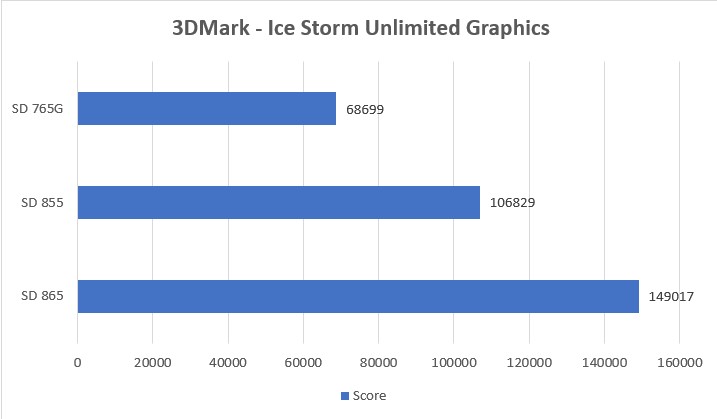 This benchmark aims to stress both the CPU and GPU. The SD 765G couldn’t pass the benchmark with a respectable number. As for smooth motion, you need at least 30FPS, however, it just managed to maintain 21FPS which resulted in a lot of stuttering and lag. The SD 855 passes the benchmark perfectly, by scoring 36FPS, with small drops here and there. However, the best out of the bunch was SD 865 unsurprisingly as it maintained a nice and smooth 45FPS, no drops occurred during the benchmark and it ran amazingly well. 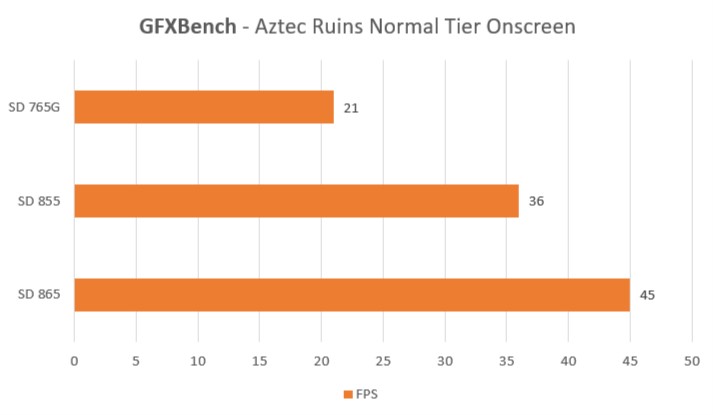 Looking at the benchmarks, it is clear that from every angle CPU, GPU, and overall performance. The standings come out to be

Performance makes up the building blocks of the phone. The flair and finishing touches are given by the features that the SoC (System on Chip) provides. You wouldn’t even notice them but they make our life much easier.

One of the major changes in modern SoC is the inclusion of 5G, which is the successor of the 4G. Implementing 5G is becoming an extremely difficult task. There are a lot of challenges that 5G makers will have to solve to make 5G available everywhere. One of the challenges is the support for 5G. One of the main focuses of developing SD 765G and SD 865 has been 5G. The SD 765G X52 modem has integrated 5G support unlike SD 865 where the latter needs an external modem for 5G support. SD 855 doesn’t support 5G

Another major feature you may not know about is NavIC, India’s indigenous Satellite Navigation System India’s satellite will handle GPS, GLONASS, etc. and we won’t have to rely on satellites of other countries. Both the SD 765G and SD 865 support NavIC. SD 855 doesn’t support NavIC.

SD 865 offers top of the line features, with amazing performance improvements over SD 855. It is the best SoC (System on Chip) available for the Android phone period.

As for SD 765G, it lags behind SD 865 and SD 855 in performance. However, being a mid-range SoC is expected. It offers premium features like AI, NavIC, and 5G at an affordable price. So, if you don’t do much gaming, then SD 765G is just perfect as it will offer similar performance as SD 865 and SD 855 in day to day tasks and also being more energy-efficient.

SD 855 despite being 2 years old, still caries itself gracefully and still is an amazing chip. There are a lot of phones being sold at an affordable price with the SD 855, so if you don’t care about the above-mentioned features and are looking for the best performance in a particular price range. Then SD 855 is still amazing and will offer top-notch performance.

Decoding The Communal Fallacies Between The Two Identities – IV

Power theft in UP; around 1 crore citizens has never paid bills