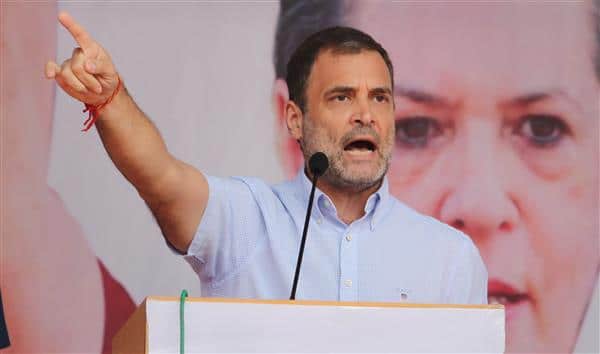 After visiting the Mata Vaishno Devi shrine, the Congress leader addressed the party workers and called for the restoration of statehood in Jammu and Kashmir.

Without mentioning anything about the special status of the valley or the restoration of Article 370, which was abrogated in 2019, Rahul Gandhi said that “statehood should be restored in J&K”.

On the second day of his two-day visit to Jammu, the former Congress President spoke to the party office bearers. “The feeling of love, a brotherhood that exists amongst you all is being ruined by the people of BJP and RSS.

Your composite culture was attacked, your brotherhood was attacked, and they weakened you before snatching your statehood. You can see for yourself that the Union territory’s economy, tourism, and business are badly hurt,” he said.

His speech however triggered the BJP as he mentioned the Hindu goddesses in his address while comparing them to the government’s past decisions such as GST and demonetization. “There are three symbols of Mata (pindis) there — Mata Durga, Mata Lakshmi, and Mata Saraswati.

Durga Ji symbolizes the power to protect, Lakshmi Ji fulfills one’s aim and Saraswati Ji is for knowledge. The BJP weakened all these powers when it converted Jammu & Kashmir into Union territory, brought farm laws, demonetization, Goods and Services Tax, and installed people having RSS background in educational institutions,” he added. In a press conference immediately after Gandhi’s remarks, BJP spokesperson Sambit Patra asked the Congress leader to apologize and claimed his remarks to be “immature”. “Problems of Jammu and Kashmir are the legacy of the Gandhi family. It was Jawaharlal Nehru who was responsible for the problems of Kashmir,” Patra said.

“Astonishingly, Gandhi forgot that the woes of the Kashmiri Pandits were because of the politics of appeasement of Congress. Congress for its petty vote bank politics sacrificed also the development of Kashmir,” Patra added.

Rahul Gandhi went on to say that he is a Kashmiri pandit and understands the pain of the community, promising help to them.  “During the meeting, I realized that I am part of this delegation. My family is also a Kashmiri Pandit family, and I am a Kashmiri Pandit. Therefore, I want to say here that I don’t lie, and I want to tell my Kashmiri Pandit brethren that I will help you,” he said.

The Jammu and Kashmir BJP Chief in Jammu, Ravinder Raina said that the visit is used by Rahul Gandhi for political appeasement in the name of religion.

“Congress has committed enough sins, and now it is good that they want to seek mercy from the divine mother. But even now, the Congress blatantly displayed its flags on the Mata Vaishno Devi track, which proves that the party is only indulging in false propaganda in the name of religion,” he claimed.