The Sikhs groups are protesting against the alleged forceful conversions of Sikh women in Jammu and Kashmir. 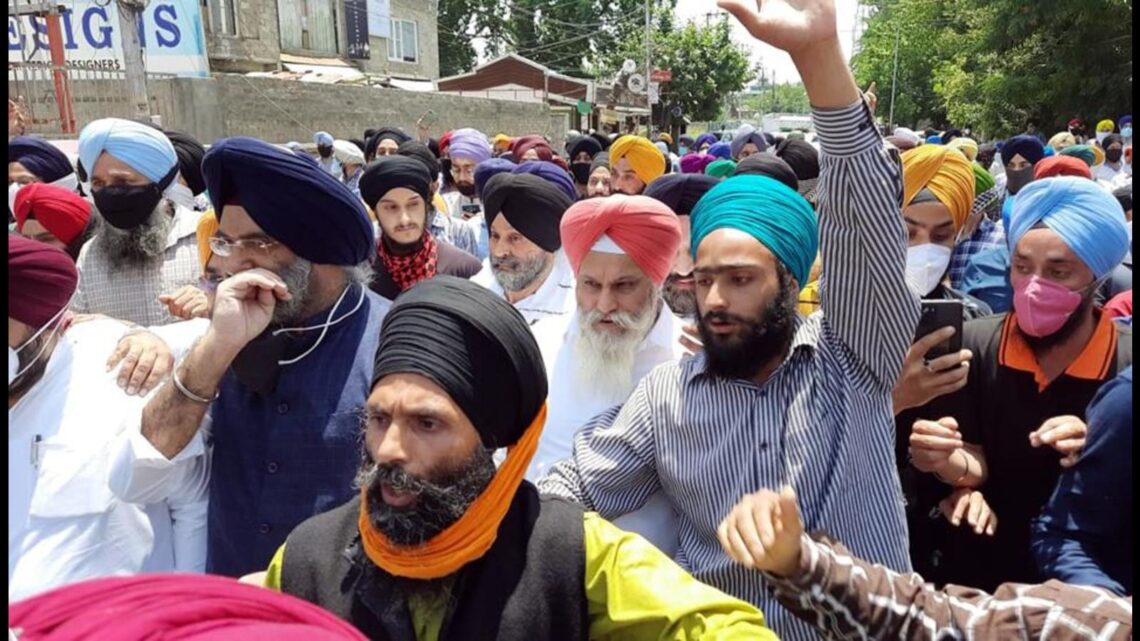 The Akal Takht Sahib and the National Sikh Front have prompted the government to enact a law to examine the forceful conversions of Sikh women in Jammu and Kashmir.

The Akal Takht Sahib group has demanded an anti-conversion law implementation in the Union Territory, similar to the law implemented in Uttar Pradesh.

The demands were put forth after allegations of forceful abduction and marriage of young girls of the Sikh community surfaced.

The first case was of a specially-abled 18-year-old Sikh girl who was allegedly abducted and married to a 60-year-old man in Srinagar from another religion. The man reportedly abducted the girl from the Rainawari area of Srinagar. He is accused tp already married with children.

The family of the girl filed a missing complaint to the Jammu and Kashmir police as the girl went missing on 21 June, and did not return within 36 hours.

The family further stated that the girl was abducted at gunpoint. The girl was found near Chandoosa village in north Kashmir. She was presented in Srinagar High Court along with her family and the accused.

The family alleged that the girl was married forcibly to the 62-year-old man. However, the court declared the marriage as ‘valid’ and handed over the custody of the girl to the family of the old man.

The parents of the girl disputed, stating they were not allowed in the courtroom.

Another girl went missing from Mehjoor Nagar of Srinagar. She attended a wedding of a Muslim friend and was allegedly found married to a boy who attended the same wedding. The status of the girl is still missing.

The Srinagar Sikh community was notified of the news. Later, they held a protest outside the Judicial Court Complex of Srinagar. Demanding the girl’s custody of her parents. Subsequently, the parents were allowed to meet the girl at 10:30 pm.

The matter was discussed by Sikh leaders in Jammu and was informed to the Sikh groups including Delhi Sikh Gurdwara Management Committee (DSGMC) and Shiromani Gurdwara Parbandhak Committee (SGPC).

A gathering of 200 Sikhs was held at Shaheed Bunga Sahib in Bhagat, Srinagar to protest against such conversions in Kashmir. The gathering demanded charges against people who forcefully married the girl to the 62-year-old man.

Manjinder Singh Sirsa wrote on Twitter,  asked the Home Minister, Amit Shah, to implement a law in Jammu and Kashmir mandating the permission of parents before marriage as a solution to forceful nikahs (marriage).

In later updates posted on Twitter, the group had a meeting with the Director-General of Police (DGP) of J&K, Dilbagh Singh, who assured them to provide safety to the Sikh girls and return to their families.

The Sikh group held a meeting with the Jammu and Kashmir Lieutenant Governor Manoj Sinha, accompanied by the Superintendent of Police (SSP)  Sandeep Chaudhary.

The meeting lasted an hour. The officials assured them that the girl will be returned to her family.

Amit Shah, Union Minister of India, assured actions against the accused after demonstrations were held by the Sikh groups in Jammu and Kashmir.

Omar Abdullah, former leader of the Union Territory, tweeted about the incident, urging the officials to investigate the matters and persecute the culprits.