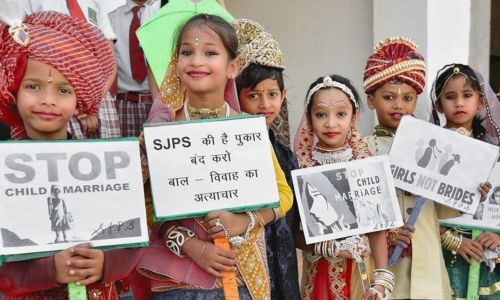 In a 15 year old girl’s bold step, five child marriages along with her own got averted

A 15-year-old girl Chandni from Bihar fought against her child marriage and also fought for three more girls to prevent them from the same issue.

People always speak “Prevention is better than Cure”, but what if, when only prevention is to cure something from to roots or from where the issue is stemmed. The case of Child marriage is something like that only. Do you know? According to a UNICEF report titled ‘Ending Child Marriage, A profile in India states that one in three of the world’s child brides live in India and of the country’s 223 million child brides, 102 million were married before they turned 15.

Chandni Could have been one among the 22 million girls in Bihar who were married before they turned 18.

Her parents were married as children and as the eldest of seven siblings, it was now Chandni’s turn to maintain the so-called tradition which has been running for decades which is to be very normal especially in Damodarpur Mahuli in Samastipur, Bihar. But, the Chandni Began to understand the issue of child marriage more deeply, how deeper it is stemmed and from where roots are coming, and how much it needed to stop and why. After spending days on research and after gaining knowledge, she was able to diagnose her aspirations clearly and knew exactly what she wanted to do.

She joined ‘Samvidhan Live! Be a Jagrik’s journey. Through the lived experiences which leads her to perform the task related to fundamental rights and duties which made her more confident about her and this journey made her aware of the true flavour of life what it really should experience in this adolescents age.

Jawahar Jyoti Bal Vikas Kendra is a youth engaging organization working to empower 30,000 adolescents and youth by building their leadership capacities. They facilitated this experiential journey with close to 300 adolescents in Samastipur Bihar. During this organization drive, Chandni expressed her concerns about her inabilities and of course the lack of corporation from her parents and family but after the orientation from the organization about the basic principle of the constitution of India, the preamble, Child Rights, these orientation programs grew her apprehension into confidence and apparently thing get started moving in the right direction.

After then, all the gathering around in the village; saw Chandni indulge to spread awareness about women rights and not only this she organized peers into groups and facilitated the awareness about the issues faced by the teens in their community. As she also wants her to be free from the bars of marriage and to experience the facilities and the rights of what she deserves and girls like her which are not that bold enough to raise voices against these issues and gradually she developed the leader within her and began to understand the issue of child marriage deeply and then she decided what she wanted to do.

The first step she took, to make her family understand her perspective and the angle she was thinking about her future although it was not easy to make them understand, after the mature conversation with them Chandni was able to demand her right to life, survival and development as a child and to complete school and study further. Her Jagrik journey enabled her to experience her threshold ability to take charge of her story and she also decided to facilitate a similar experience for other girls suffered or suffering from the same issues.

In order to stop the practice of child marriage in her village, She convinced many people to see what she wanted to say. This led to two teenagers being freed from child labour and given the opportunity to complete their studies. A total of three child marriages has been prevented since.
After the influence of this inspiring the story, over 5000 adolescents joined 173 institutions across 15 states in India and played ‘Samividhan Live!.

If one Chandni could bring the change in her life and not her but many others around her. Imagine if millions of people come together to fight against issues like child marriage and child labour, all spaces of weakness would fill, and new India with strong the foundation will rise.

SANJYOT KEER, From a Passionate Cook to a Celebrity Chef of India