10 Bollywood Villains who will first crack you up with their funny names then scare you with their actions.

by Sami Majid
in Entertainment, Listicles 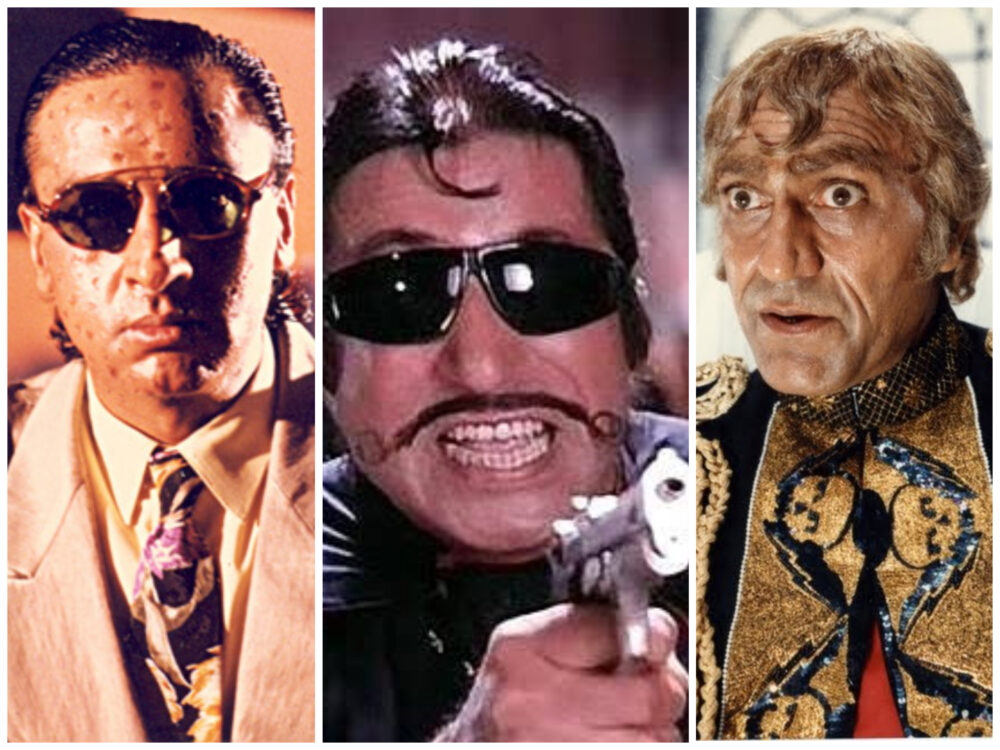 Villains in Bollywood have not only played a pivotal role in movies but also found a separate space in the memory of viewers because of some unforgettable attributes their characters were given like wicked smiles, scary eyes, unmanly faces, etc. All these are accentuated to catch your hearts out of fear. But there are times when Bollywood gave its villainous characters attributes that cracked the audience with tears of laughter in their eyes. Their names are one of them.

So, today TSA has brought you 10 of our favourite villains whose names will make laughter erupt from within you, for sure.

The character, Mogambo played by Amrish Puri sent shivers down the spine with his frightening appearance and croaky masculine voice. But that’s a later thought. The first thing which makes its appearance after hearing his name is laughter. I mean, C’mon who wouldn’t laugh at such a name? No wonder we have so many memes with his iconic dialogue “Mogambo Khush Hua”

Kulbhushan Kharbanda played the hi-tech villain ‘Shakaal’ in Shaan (1980). Where Kulbhushan’s sophisticated acts with the sadistic looks made him one fear-generating villain, his name, on the other hand, made the viewers crack up hard.

Shakaal’s one famous dialogue is “Yeh zahreeli gas dheere dheere mehfil ko aur rangeen banati rahegi.” well, we don’t know for how long the zehreeli gas will make the surroundings lively and colourful, but we surely know that his name will keep on making the audience laugh.

Villian from the best comedy movie of Bollywood has to be funny, no? And Crime-Master Gogo stands right at the need. From his name to his actions and dialogues everything cracked us up. This reminds me of his famous dialogue “Khandaani Chor Hun, Aaya hun to kuch leke jaunga”

Sorry guys, I couldn’t control my laughter. I mean, what sort of a name is that?

After Chhedi Singh, Bachcha Bhaiya isn’t much of a surprise for the viewers of the Dabangg sequel, is it?

Can you imagine someone who sends shrills down the spine every time he appears on the screen with a name like that? Kaancha Cheena?  We need better creative thinkers in the industry guys!!!

How can you name a bad-ass villain “Pinky”  I repeat myself, We need better creative thinkers in the industry.

Chhappan Tikli? Are these names for real? Bollywood what were you thinking?  I bet the writers were high on something while choosing the names of these characters.

“Mere naam hai bulla, rakhta hu main khulla.” Where his dirty aura will make you convinced that he is nothing but a villain, his name ‘Bulla’ will make you go ROFL. What a kind of a name is that?  Kanti Shah should have thought better!

Jagga played by K.N. Singh was one of the earliest and most memorable bad guys of Bollywood. He falls to the category of gentleman-villain. Along with his bad vibes, Jagga’s powerful dialogues like “Sharam sharifon ko aati hai, chor aur daaku ko nahin” made him one of the badass villains of Bollywood. But this fact is not in line with his funny name, Jagga. You and I both can agree on that, no?

Apart from that, we have some honourable mentions like “Kesariya Valeti” from Ram Lakhan, Gokul Pandit from Dushman, Prem from Bobby and Lion from Kalicharan.

Let us know if we missed a villain whose name can crack us and you up with laughter. Also, keep checking our entertainment category for such entertaining content.
Also Read: 10 Best Roles Played By Robert Pattinson

Broad Shoulders Need to Widen, Not to Shrink to Carry Weight of Nation’s Expectations: Bhushan Verdict

IGIB: Come Up with the new technique for Covid-19 test

IGIB: Come Up with the new technique for Covid-19 test