TSA presents you with some advertisement that uplifts the spirit of Hindu-Muslim brotherhood. 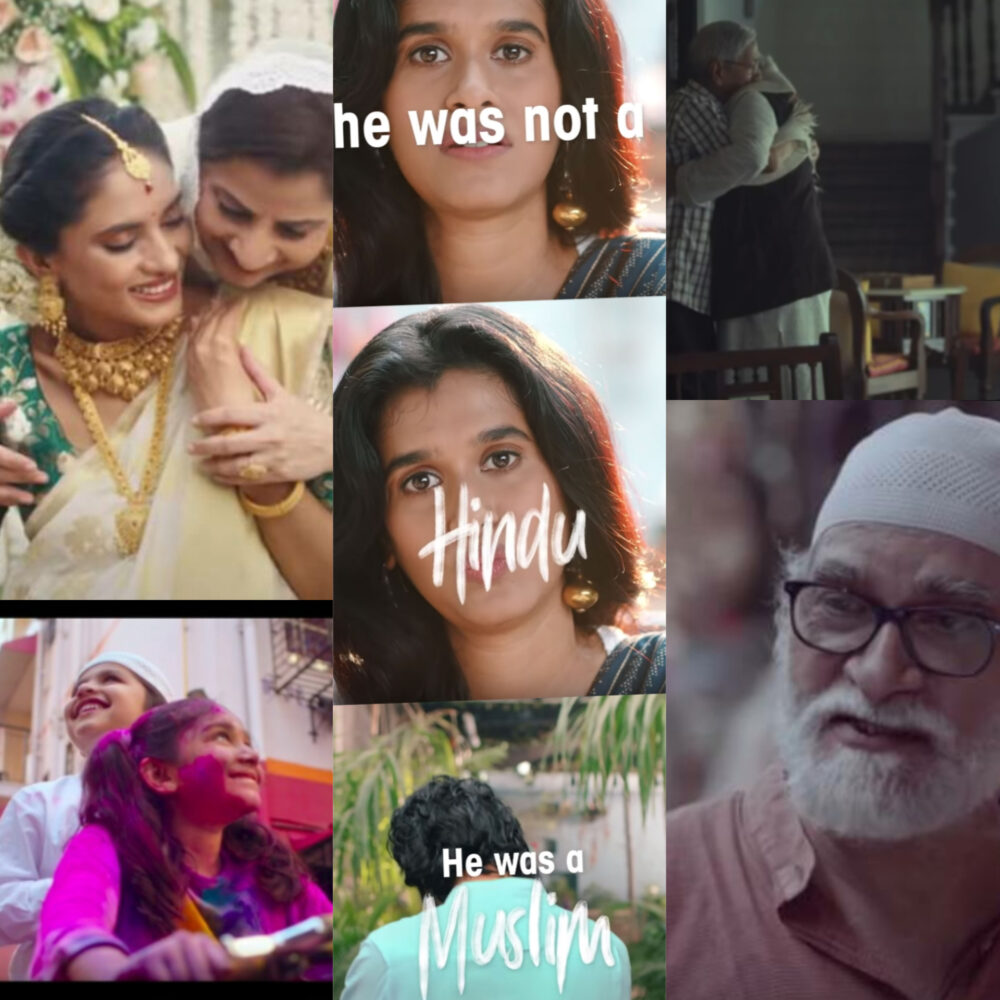 The Tanishq Love-Jihad ad controversy has unlocked a trash bin over social media, criticized by a majority of the population of the country. The jewellery brand took down the culturally sensible advertisement on Monday evening.
However, it is not the first time that an ad agency has released an advertisement that is dragged into controversy and politicized. Regardless, the brands were promoting a healthy relationship between the communities.

In return, they have been used as a scapegoat for the Hindu community to raise communal tensions, in the name of love jihad, which is highly blameworthy and disgusting.

Today TSA presents you with some advertisements that uplift the spirit of Hindu-Muslim brotherhood.

The detergent brand, known for its heartwarming ads, with mottoes like “Daag achee hai “shared a minute-long Holi ad in February 2019, with a catchphrase ‘Rang Laaye Sang’ (colours bring people together) portraying a story of two kids, a young Hindu girl and a Muslim boy.

The girl protects her friend from colours as she drops him to the mosque with a touching parting note,” Baad Mai rang Padega” ( will colour you later).“Apnepan ke rang se auron ko rangne main daag lag jaaye, toh daag acche hain (Stains that come as a part of a good deed are good stains)

As soon as the brand released a Holi-centric campaign titled #RangLaayeSang, it was highly criticized by the Hindu majority, as it was believed to be Hindu phobic, encouraging “love jihad”, hurting the sentiments of the festival.

On the occasion of Ganesh Chaturthi, the country’s number one brand for tea “Brooke Bond Red Label” launched – ‘Shree Ganesh Apnepan Ka’, a campaign to celebrate the essence of togetherness.
The advertisement portrays a Hindu man becoming reluctant to buy an idol of Ganapati Bappa when he realizes that the idol-maker is a Muslim.
While the Hindu buyer is shown as impatient initially, the Muslim man is portrayed as generous and kind whose behaviour ultimately melts the heart of the customer.
Inspired by real-life stories, the campaign digs into deep-rooted human prejudices. It motivates everyone to open their minds and break the restraints of their own beliefs to come together.

A cup of tea can be both an ice breaker and the one that induces serious conversations among old-timers. That’s why they say where there is tea; there’s hope.

The Brooke Bond Red Label created an ad in the year 2014, which led to a fuss when the ad showed a hesitant Hindu family turning into good buddies with their Muslim neighbour, over a few cups of Red Label tea.The ad was both praised for its modest preaching on the religious ridge in the country as well as criticized for showcasing Hindus as impatient and unwelcoming towards Muslims.

4. This Google’s reunion ad has moved people to tears across India and Pakistan

The “Reunion” ad by Google India has aroused memories of the bitter division of India and Pakistan in 1947. The three-and-a-half-minute long ‘Reunion’ ad is about relationships, fond childhood memories, separation and reconnecting to the past.

In the ad, an Indian Punjabi is displayed telling his granddaughter Suman about his fond childhood memories in Lahore, Pakistan. Revisiting their memories of India and Pakistan’s partition the ad ends with the two friends re-united.

The motive of the ad was to show India that how their search engine can help people to reconnect separated by distance due to human-made barriers.

A country where a film (like Kedarnath) can be perceived as controversial because the lead actor’s character is Muslim and the lead actress is Hindu.

The ‘Love Jihad’, campaign led by Closeup is undoubtedly very bold. Campaign #Free-ToLove was strived to praise confidence and to indicate our belief in the freedom to decide the person whom we want to be with regardless of caste, religion, gender or age.

The ad showed a couple breaking up because of a conflict over religion, which accelerated a ferocious response from a section of the population.
“The problem arose when my family got to know that he was not a Hindu, he was a Muslim… families chose to prioritize that over our happiness,” says the woman in the video.

Over the years, the jewellery brand Tanishq has given us heart-warming advertisements that made us feel warm, leaving us teary-eyed.

The brand promotes not only jewellery but also a progressive and robust mindset.
The 45-second ad portrays a pregnant Hindu woman accompanied by her Muslim mother-in-law to her baby shower ceremony.

The woman then questions her mother-in-law that “this ceremony is not held at your home…”, to which the latter replies, “Isn’t it a tradition to keep daughters happy everywhere?”
Various sections of society highly criticized the advertisement in the name of “Love Jihad’, and the ad was later taken down.

Such advertisements can be found in abundance, which reflects the times we live in. It’s a mere creative performance of thought about religious unity and the brand message.
People might be complaining because of their particular mindset. It’s not a global reaction; it’s a reaction from a specific section, turning into a political controversy. It only goes on to show that there is a dedicated agenda underway to sell a particular narrative that’s love jihad.

Birthday Special: 8 Times Om Puri Was So Entertaining That He Made A Memorable Place Among The Audience