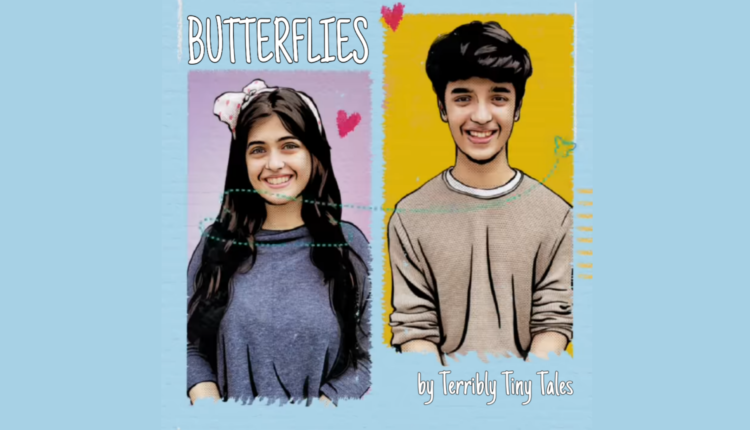 watching films or web-series becomes even more fun when they are watched with someone rather than alone. So, come watch "Butterflies" by TTT with TSA.

Terribly Tiny Tales or TTT is a world of stories. It is a platform which brings the tiniest of tales which cover thousands of emotions. TTT celebrates micro-fiction. In the age where most of us have no time for lengthy readings, TTT preserves its pleasure in their micro tales. Their tales are quick to read but hard to forget. The best part about TTT is that they have something for every individual and every emotion is served by them, and this is no hyperbolic statement. Personally, they never fail to astonish me with their brilliantly written terribly tiny tales. Those of you who already know about TTT must be knowing how terribly good they are in telling stories with the minimum usage of words.

Writers often collaborate with brands to spread a word about the brand in a creative way. TTT has been doing the same but their way is so pleasant that every reader feels related. 5 years ago, in February 2015 they started giving visuals to their tales and from there emerged “Terribly Tiny Talkies” which started producing award-winning short films. Later, they also started collaborating with brands for their short films. One such recent collaboration of TTT has been with Cadbury. Two days back, on 31st of July, 2020, they released the first episode of their mini web-series called “Butterflies”, The name itself brings a pleasant feeling to us, no? The episode is called “The Last Clue”

We at TSA thought to watch it and share our very first and honest reactions with you all. The description of the episode goes like this… “It’s Zoey’s 16th birthday, and Samar seems to have forgotten. How can he, after all this time?! Growing up in the same housing complex, going to each other’s birthday parties as a kid? It’s a little different this time. They’re staying home, and they haven’t met in a while. And there may be newly blossoming feelings involved on either side… Did Samar forget, or is this birthday going to be the most memorable one?”

Uh oh! So many wishes from so many people, but where’s THAT wish? 😐

HaHa! Are all the boys same?😂

Look at that excitement😂😍 Haven’t we all experienced that? at least once in our life…

A plant as a gift?

Oooh so he meant planted a surprise 😅  Aww.. ♥️

Treasure Hunt wow! 😍 BRB texting a friend to remind of the treasure hunt I prepared for her bday. Man!! This episode is getting too nostalgic 🥺 🥺

Look at his nervousness. He’s so cute ♥️

Ooh!! so this is what he meant by “tattoo artist” 😅

LOL I thought of elevator too 😛😛

okay so now I’m actually getting butterflies in my stomach. 😅 🙈 And now I know why TTT named the mini-series “Butterflies” 👌

I wonder what will be the treasure, do you have any guesses? Probably Samar will take her on a cycle ride to their another favourite place, leave your guesses in the comments section below.

Their nervous selves look so cute. But are kids really like them these days? Maybe some of them still are.

Oh god!!! It didn’t cross my mind that he was confessing to her for the first time through that note🤦🏻‍♀️ I’m so dumb LOL But Samar!!!! You are sooo adorable ♥️♥️

and Happy beginning to you both 😍 Well done Samar 💯👌👏

Look at their faces. They look sooo happy. I’m going all awww… 🙈 I guess it’s true that real happiness lies in small things and genuine efforts. 💯

This was one of the sweetest tales I watched❤️ absolutely loved it. How did you feel after watching this? Please let us know in the comments section below. Also, the next episode of this season will be streaming live next week. Watch This Space For That BTW are you guys excited for the next episode? Would you like to watch it with us? Let us know that too.

Raksha Bandhan: Significance and Fables around the festival

Laws And Rights Every Indian Must Know