Mesmerised with the zeal and zest with which Chhat Pooja is celebrated? Everybody is. However, there are many interesting lesser-known facts about this "Parab". Continue reading to know about them.

by Sadaf Afreen
in Featured, Infotainment, Listicles
Reading Time: 3 mins read
A A 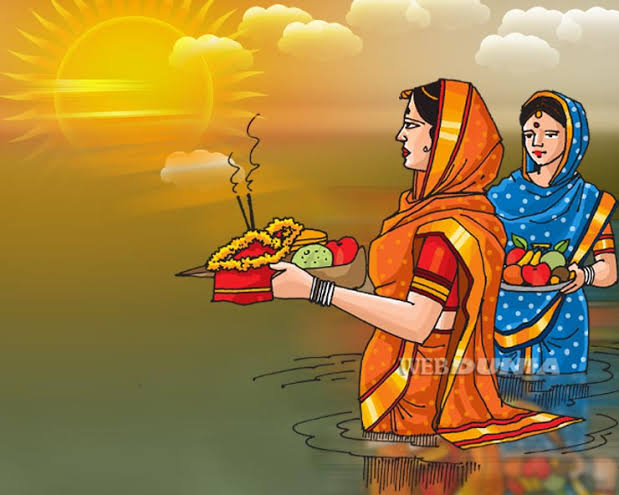 India, essentially a land of festivals, intrigues the people with the customs, traditions, and colourful hues that it offers. One of such jolly festival is Chhat Pooja. Today is the day of its celebration.

No wonder, not many people know about its significance and context. Don’t worry, TSA brings to you an all-embracing write up about Chhat Pooja. Continue reading to know its how, why and when.

1.  Chhat Pooja is a four-day festival elaborately celebrated in Bihar, Jharkhand, Nepal and certain parts of Uttar Pradesh. It is significantly known as the most important festival of Bihar.

2. Starting on the 6th day of Hindu lunar calendar month “Kartika” which means a week after Diwali, the festival celebrates the bounties that Sun offers as being the primal source of energy thus giving the festival a name “Surya shasthi”.

3. Chhati (Vedic Goddess Usha) or simply the sun is acknowledged as the sustenance of all lives and therefore devotees worship sun along with the Goddess Usha (first rays of morning sun), and Pratyusha (last rays of evening sun).

4. The time at which Chhat Pooja is held also encompasses great scientific benefits. It is believed that during sunrise and sunset the human bodies are capable of receiving the most positive solar energies because the harmful ultra violet radiations are emitted minimally during those times of the day.

5. Chhat Pooja holds its roots from the Vedic rituals making it perhaps the only Vedic festival in the Hindu religion. Ramayana and Mahabharata mention this “Parab” with Sita and Draupadi doing this Pooja respectively. It is also a folk belief that this Pooja was started by Surya Pautra Kar

6. “Parvaitin” (the devotees) pray for the well being and prosperity of their families. They observe the festival in the following stages:

Day 1: Known as “Nahay Khay”. Devotees take a dip in River Kosi, Ganga, or Karnali and prepare offerings from the holy water of these rivers.

Day 2: Known as “Lohanda or Kharna”. Devotees observe the fast without water and break it after worshipping the Sun God in the evening. The Prasad which consists of a special meal of Tasmai (a dish similar to Kheer) is offered to Sun God.

Day 3: Known as “Sandhya Arghya”. With the observance of the fast again this day, the entire day is spent in preparing offerings including thekua, coconut, banana and other seasonal fruits. All the devotees offer “Araghya” to the setting sun at the riverbanks or clean water body.

Day 4: Known as “Bihainiya Arghya”. On the last day, devotees again assemble at riverbanks to offer prayers and Prasad to the rising sun. Thereafter, they break their fasts preferably with Chhat Pooja Prasad.

7. Purity makes the essence of this festival. To observe maximum purity, the devotees follow abstinence, sleep on the floors, and stay away from their family members for these four days. The person following these rituals is called “Vrati” and is believed to be a pure spirit. He is also believed to undergo several mental and bodily regulations during these rituals.

8. Once a family starts to celebrate this festival, there could be no stopping for all the coming generations: the only exemptions being severe illness and death.

9. Probably, this is the only Hindu festival that does not require any priest or Pandit ji to sanctify its rituals.

10. Not only in Hindu religion, but also many other civilizations and cultures celebrate similar kind of festival where the sun is offered gratitude and worshipped such as Babylonians and Egyptian civilizations. Also countries like Trinidad and Tobago, Mauritius etc seek the blessings of the sun by worshipping it.