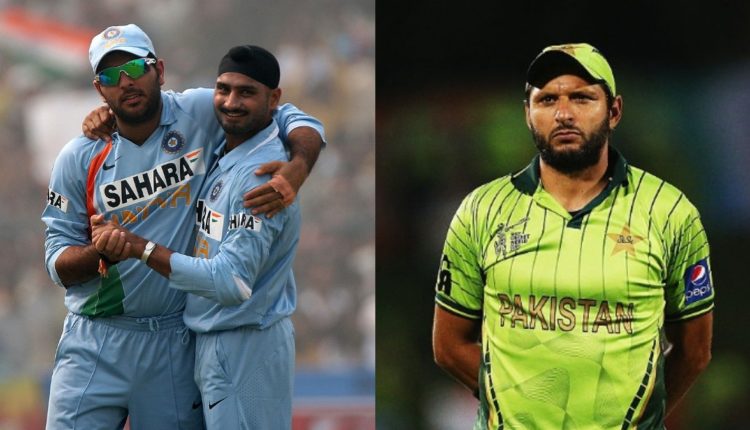 Shahid Afridi and Harbhajan Singh Quarrel: A Controversy off the ground

The twitterati observed a quarrel between former Indian off-spinner Harbhajan Singh and famous Pakistani cricketer Shahid Afridi. It all started when  Afridi, during his visit to the POK, said that he wanted to play his ‘last PSL season from the Kashmir team’ and made derogatory comments on the Indian Prime Minister, a snippet of which was widely shared on social media on Sunday-

Commenting on Afridi’s remarks, Harbhajan Singh, on Sunday, slammed Afridi for his comments on India and PM Modi during his visit to Pakistan Occupied Kashmir (PoK). Last month, Harbhajan and Yuvraj had posted videos in support of the ‘Shahid Afridi Foundation’ which was raising funds for the underprivileged affected by COVID-19 pandemic. The veteran spinner also said that he had only contributed to Afridi’s fund on his request in goodwill gesture and its benevolent causes. It was only after this time that he said he will not do so anymore. Harbhajan also spoke about the backlash where netizens have very openly questioned his nationality and categorically stated that there is no need for him to prove his loyalty to people on social media.

“I thought he was our friend but this not how a friend behaves. Ye badtameezi hai (It’s rude). He should have stayed within his limits but unfortunately keeps on talking rubbish about our country and our PM. What I did for him was in good faith and people suffering due to the Coronavirus. But from now on no further relations with him. No more message or helping him. He has to learn how to respect other people,” Harbhajan said on Sports Tak.

“Even our Prime Minister has said that Coronavirus is a fight that extends beyond borders, religions, and caste. So we were very clear with the cause that we were promoting, which was simply to help those in crisis.”

“But this man (Afridi) is talking ill about our country. All I have to say is we have nothing to do with Shahid Afridi. He has no right to speak ill against our country and he should stay in his country and limits,” Harbhajan remarked.“He is no more my friend. Maybe he is eyeing a political career. But if so then he should do it at his own strength and not by abusing our PM and our country. If that is the way then I don’t think his political career will last long,” he added.

“I feel terrible that I even called him a friend. He is not a worthy human being who can be called a friend. I am done with calling Afridi a friend,” he added.

It was at this moment when current Indian opener Shikhar Dhawan also condemned former Pakistan all-rounder.

The argument further heated up when Raina ridiculed Afridi and said that he spoke on the issue just to remain relevant. The Indian batsman said mentioned that Afridi should work for the welfare of Pakistan and not bother about Kashmir.