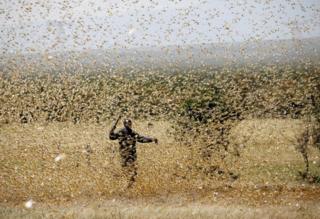 As if a global pandemic wasn’t enough to wreak havoc on the world another one arrived, this time from the sky. The sky that farmers were looking up to in the hopes of Monsoon rains is now raining down locusts or tiddiyan, as known locally. Desert locust moves in large groups, called swarm eat crops up to their own weight every day. When millions of locusts descend on a crop, they destroy everything.

Usually, desert locusts are seen in western Rajasthan and Gujarat from June to November, but they were first seen by the Union agriculture ministry’s Warning Organisation (LWO) in April.

The issue of concern is that usually, they are either solitary or in small groups, meaning the current swarming is unusual. Locusts belong to the short-horned grasshopper family and can prove to be disastrous as only a small swarm can eat food that normally would be eaten by 35000 humans in a day. As a result, the major brunt of the problem is faced by rural India as their crops are being invaded on ruthlessly. According to a Times of India report, locust swarms have reached as far as Vidarbha in Maharashtra and caused crop damage. This, says the report, has not happened since 1974 as they were earlier only confined to north-west India.

Locusts breed in moist sand and greeny arid areas and given the heavy pre-monsoon rains that India witnessed just a few weeks ago, provided the pests with the same. Already burdened governments are finding it difficult to contain yet another crisis. Social Media is now engulfed with the images of rotten and ruined fields that stand after a locust attack. Experts warn that the situation could get even more extreme with more expected to reach India via Pakistan from the Horn of Africa in June. In December 2019, when the parts of Gujarat were invaded by locust, they had destroyed crops spread over 25,000 hectares of land.

Centre and States shall provide all necessities to the stranded migrants, orders Supreme Court.