If you enjoyed watching 'Ludo' then these 5 Hindi Movies of similar genre on Netflix and Amazon Prime Video are ideal for your next binge.

by Aisha Mushir
in Entertainment, Infotainment, Listicles
Reading Time: 3 mins read
A A 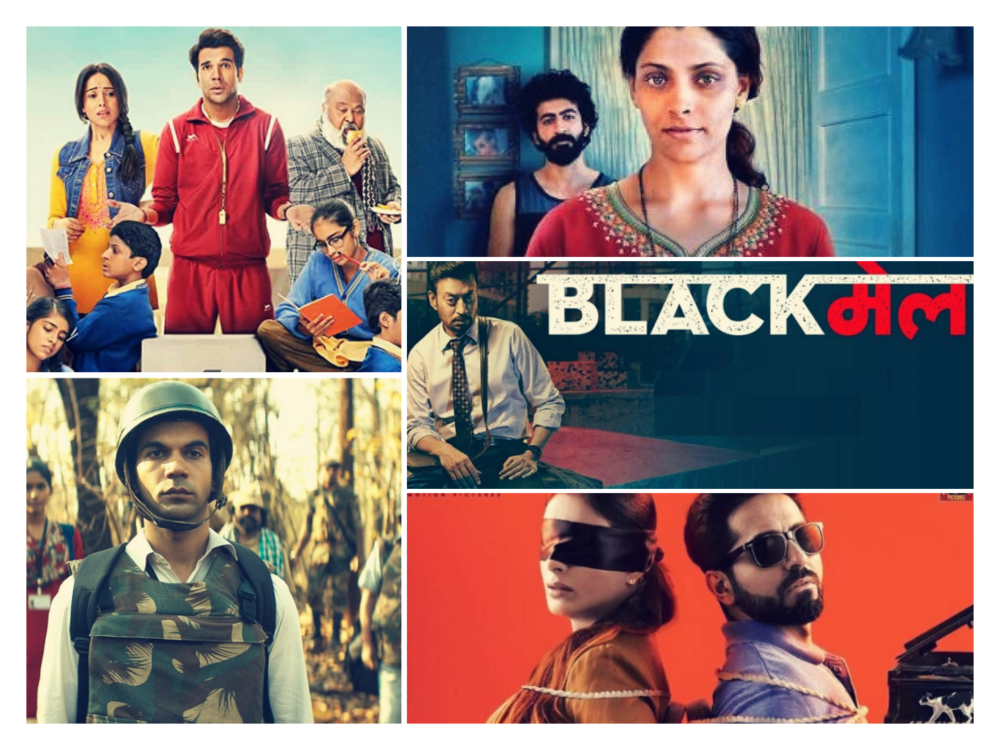 The release of ‘Ludo’ on Netflix recently, directed by Anurag Basu who has movies like ‘Barfi’ and ‘Jagga Jasoos’ to his credit is a stellar performance with suspense, Humour, and thrill. Starring Abhishek Bachchan, Aditya Roy Kapur, Rajkummar Rao, Pankaj Tripathi, Rohit Saraf, Fatima Sana Shaikh, Sanya Malhotra, and Pearle Maaney in the lead roles, the film is giving the audience a good time amidst these gloomy times.

With the acceptance of Ludo amongst the audience, we bring to you similar movies that are available on Netflix and Amazon Prime Video and that you surely would love to watch.

Blackmail is one such black comedy thriller by Abhinav Deo who also gave us Delly Belly in the same genre. With the cast of phenomenal actors like Irrfan Khan, Divya Dutta, Arunoday Singh, Omi Vaidya, and Kirti Kulhari the film is realistic yet funny and dark. The plot of the movie revolves around Dev (Irrfan Khan), a salesman at a toilet paper company who is struggling with monthly installments, EMIS, and loans and not to forget an undesirable married life. All things break loose as one day Dev comes home early and found his wife with another man. He ponders over various methods to take revenge, to kill her boyfriend or to murder her but then he comes up with blackmail. One blackmail leads to another and the movie proceeds into a funny one with humor arising out of the situation.

Watch it on: Amazon Prime Video

Ayushmann Khurrana shows his versatility yet again in AndhaDhun by Sriram Raghavan. The story is of a visually impaired pianist who witnesses a gruesome murder and is caught by his conscience to report the murder. As the dark comedy crime thriller proceeds, making the audience wanting for more, with a lot of ‘deadly’ twists and turns that will keep you engaged and at the same time will keep you anticipating for what lies ahead. Inspired by the French short film titled ‘L’Accordeur’ or ‘The Piano Tuner’ (2010) by Olivier Treiner. AndhaDhun is all packed with deceit, fear, drama, making it an engaging dark thriller.

Watch it on: Netflix

A fine crisp thriller by Anurag Kashyap with Demonetisation in the backdrop. The story follows Sarita and her husband Sushant when a lot of money starts to come through a clogged pipe drain in the kitchen sink. Saiyami Kher pulls off the character so well and gives a stellar performance. The film shows the Maharashtrian middle-class aspirations and struggles. With strong performances and a unique story that is told once in a while.

Watch it on: Netflix

Amit V Msurkar’s second directional venture – Newton is brilliantly written and acted, making it into an exceptionally outstanding film that has been produced in a while. The movie is a satire on power politics, bureaucracy, and India’s electoral system. This Rajkummar Rao film is highly realistic, funny, and thought-provoking.

Watch it on: Amazon Prime Video

Directed by Hansal Mehta Chhalaang starring Rajkummar Rao, Zeeshan Ayyub, and Nushrat Bharucha. The story is about an unmotivated PT teacher Mahendra Singh Hooda Aka Montu who falls in love with his Colleague Neelima (Nushrat) but things start to take a turn when Inder Mohan Singh (Zeeshan) enters. Chhalaang has everything to make you laugh in a time when you hardly smile.