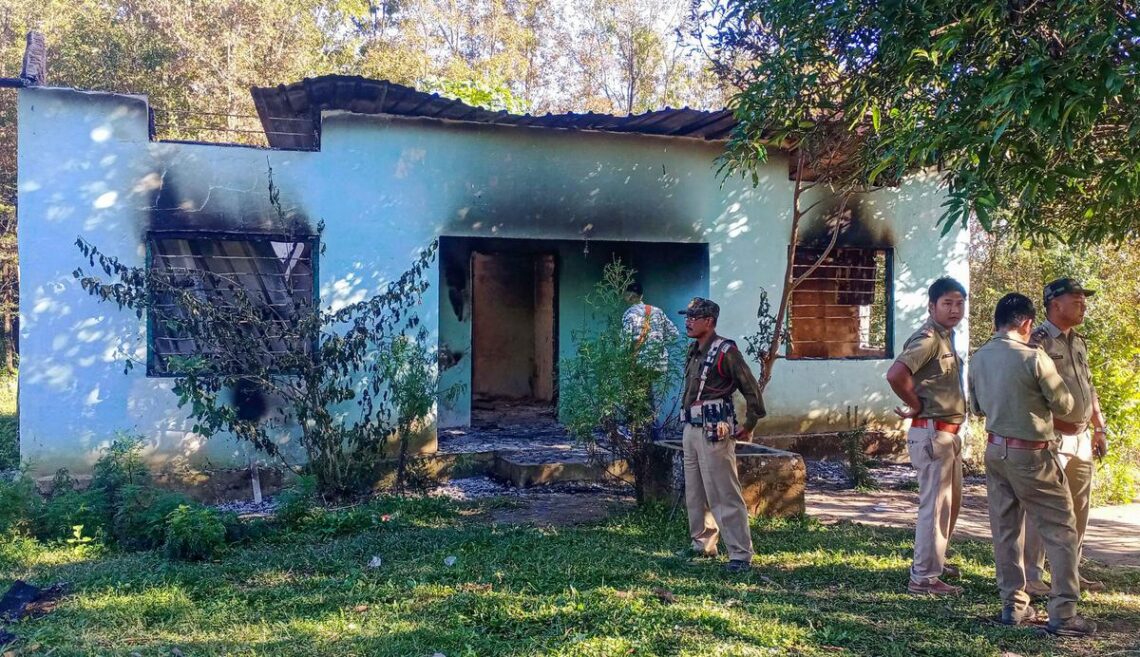 
Security personnel stand guard near a forest office, a day after it was vandalised and burnt down by miscreants following violence at a disputed Assam-Meghalaya border location.
| Photo Credit: PTI

The story so far: A bid by the Assam police and forest personnel to catch alleged timber smugglers from Meghalaya led to the killing of six people at a place claimed by each State to be within its territory. Apart from heightening tensions along a stretch of the interstate boundary, the incident sparked protests and stray cases of violence in Meghalaya’s capital Shillong and a temporary suspension of vehicular movement between the two States. It also led to a delay in the process of resolving the Assam-Meghalaya boundary dispute.

What led to the firing?

Assam Chief Minister Himanta Biswa Sarma agreed with his Meghalaya counterpart Conrad K. Sangma that the firing at about 3 am on November 22 was unprovoked. But the Assam government has insisted the incident had nothing to do with the boundary dispute and was the fallout of its crusade against the smuggling of timber by miscreants who operate on either side of the undefined sections of the 884.9 km boundary between the two States. But the National Human Rights Commission (NHRC), taking note of a memorandum by Mr. Sangma, attributed the firing to the border dispute, “a larger issue pending for long”. Had the dispute been settled, such type of incidents would have been averted, the commission said on November 29. The commission further said the incident allegedly happened after the detention of a timber-laden truck, chased by the Assam police and forest personnel, at Mukroh village. The villagers became agitated upon the entry of Assam police and forest personnel and surrounded them, leading to the firing. Five villagers and an Assam Forest guard were killed, the NHRC said.

What was the immediate fallout?

What seemed to be a local incident from far became fodder for pressure groups in poll-bound Meghalaya to rail against the Sangma-led coalition government for failing to protect border residents. Stray cases of arson, vandalisation of Assam-registered vehicles, and attacks on security personnel and civilians — mostly non-tribals — marked the protests in Shillong. For six days after the incident, Assam police restricted the movement of vehicles to Shillong and other parts of eastern Meghalaya for security reasons. Assam-based taxi operators also prevented Meghalaya-registered vehicles to enter the State. Tourism in Meghalaya was hit hard in a year it had recorded the highest number of footfalls with many tourists cancelling their trips and some cutting short their stay to get out of uncertainty. The complications arising out of the Mukroh incident also delayed the process of resolving the boundary dispute between the two States in the remaining six of the 12 sectors. “We may not be able to go for talks immediately,” Mr. Sangma said on November 29. The dispute in the other six sectors was resolved through an agreement on March 29.

How is the boundary dispute linked to the incident?

Although the Assam government claims to the contrary, the fact that the two governments refer to the place of the incident by two names makes it apparent that the boundary dispute is intertwined. While Meghalaya says the place is Mukroh in West Jaintia Hills District, Assam claims it is Mukhrow or Moikrang in West Karbi Anglong district. The village is also very close to Block 1, one of the six dispute sectors that remain to be resolved. Whatsoever may be the dispute between the two States, the NHRC said the police have to use restraint in such situations and examine the standard operating procedure for firing by the armed forces in areas of a border dispute. It also asked the Union Home Secretary and the Assam Chief Secretary to examine and evolve mechanisms or suggest measures to prevent such type of incidents.

How did the boundary dispute start?

Meghalaya, carved out of Assam as an autonomous State in 1970, became a full-fledged State in 1972. The creation of the new State was based on the Assam Reorganisation (Meghalaya) Act of 1969, which the Meghalaya government refused to accept. This was because the Act followed the recommendations of a 1951 committee to define the boundary of Meghalaya. On that panel’s recommendations, areas of the present-day East Jaintia Hills, Ri-Bhoi and West Khasi Hills districts of Meghalaya were transferred to the Karbi Anglong, Kamrup (metro) and Kamrup districts of Assam. Meghalaya contested these transfers after statehood, claiming that they belonged to its tribal chieftains. Assam said the Meghalaya government could neither provide documents nor archival materials to prove its claim over these areas.

After claims and counter-claims, the dispute was narrowed down to 12 sectors on the basis of an official claim by Meghalaya in 2011.