Games that will appeal the nostalgic childhood part in you

Let nostalgia hit you hard and make you remember your good old days while playing "wo din bhi kya din the" in the background. So here is a list of some games from the childhood for you to remember the good Old days:

by Rafia Chaman
in Listicles, Infotainment
Reading Time: 3 mins read
A A 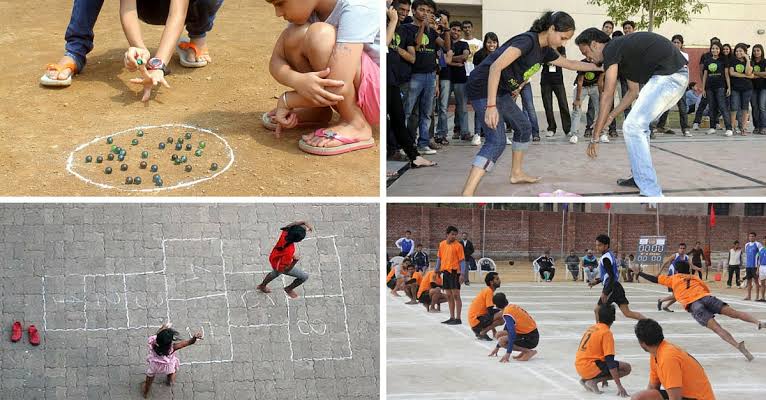 Childhood… Ahh! The good old days, and especially the childhood of kids born before technology, made it independently dependent on itself.

The days when all you needed was “अटटी बट्टी सौ साल की कुट्टी” to remove toxic people from your life and just a game to make new friends. Life really seemed to be easy at that time when the biggest concern was to choose the colour of the crayons. Oh, those decisions! How innocent were we? And how simple was life? When we hurriedly used to get back home to watch our favourite cartoon TV show (mine was pokemon) and cursed the homework at the same time.

Life was very pleasant when our shoulders hurt because of heavy bags and not because of responsibilities. When was the last time you gathered all of your friends and tried reliving all those precious moments and playing those games which you used to play while getting bathed in sweat?

ah ..you are out …you raised your finger..so off you go from the group ..let’s get back chidiya udd…main ud..kapda udd..an on goes the game. A Game where your awareness and game sense was tested to the hilt.

Remember the little gap between the periods and when we wished the next teacher comes late just to play even a single match of pen fight. Much before we started fighting over religious, political or kinds of issues with others, Pen Fight was the game which gave us the ultimate thrill. But things seemed to be a little biased as the ones with a heavy pen or pen lids seemed to have an undue advantage.

Rules were simple, one who is caught or imprisoned needs to go back to either of the two jailers and then… Tug of war.

We always had a fight as to whose team cheated or who got more number of players by their back. This game also taught us unity and at the same time taught us “jisne ghadi churai usko toh ab jail mein jana hi padega!”

Mantri- or Sherlock Holmes lite version of our own self. When we felt like one among the greatest mystery solvers of that time as we used to identify who is the Robber and who is and who is the soldier. LOL< I remember the times I made fun of my friends the moment they scored a zero.

“What color you want? I want color is…” my inner self automatically completes the lines. Writing about this also makes me laugh. It was such fun as besides those beautiful bright colors were hidden tasks or names or anything which were so interesting and weird at the same time.

This game felt like building castles for our own selves. One by one, slowly and steadily, connecting dots to get the perfect block. This game needs so many tactics and an attentive mind at the same time. Else all you are left with is Two or three castles starting with the first letter of your name.

The ultimate crush game, which very accurately used to predict your love percentage and romantic chances with your crush. This game either made you visit the seventh cloud or made you bury yourself under the ground. There was nothing in between.

This silent game even helped us increase our IQ level and thinking process by making us pressurise our brains to think quickly and at the same time correctly. This is a game we definitely used to play in our childhood during whatever free time we managed to squeeze in.

Also Checkout: Prevalent lies that we have been told about other Girls

Indian Fashion Through The Ages and the Evolving Trends

Work from Home is Tough for Women both Emotionally and Mentally: LinkedIn Workforce Confidence Index

Work from Home is Tough for Women both Emotionally and Mentally: LinkedIn Workforce Confidence Index