by TSA Desk
in News
Reading Time: 9 mins read
A A 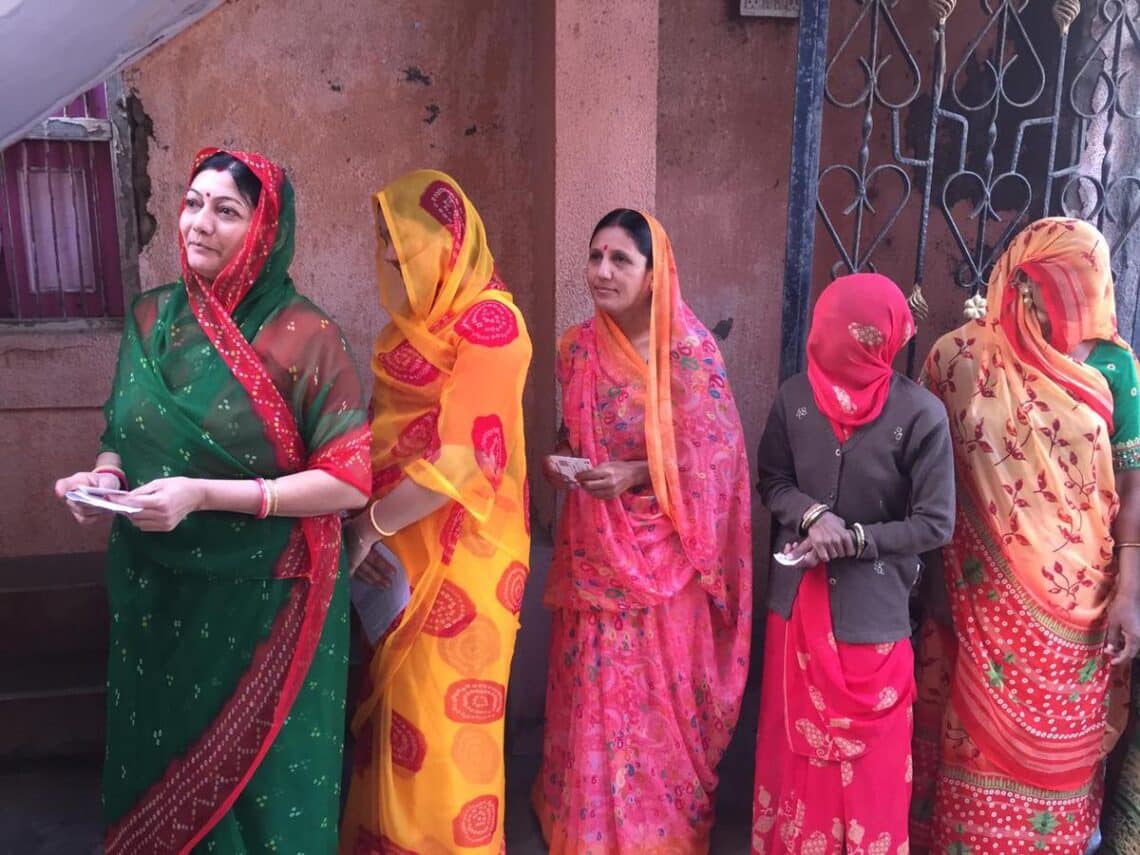 
Gujarat started voting on December 1, 2022, in the first phase of the Assembly polls in 89 Assembly constituencies, spread across 19 districts in Saurashtra-Kutch and the southern parts of the State, with 788 candidates in the fray.

Out of the 4.91 crore registered voters in Gujarat, 2.4 crore are eligible to cast their votes in the first phase of the elections. These include 5.74 lakh voters in the age group of 18-19 years, and 4,945 above the age of 99 years, the office of the State CEO said.

Amid allegations and counter-allegations, a long-drawn campaign by the ruling BJP, the Congress, and the Aam Aadmi Party, the newest entrant in the political arena in the State, ended in what appears to be a dull election season compared with 2017, when the election was held in the backdrop of two massive agitations by the Patidars and OBCs, respectively, across the State.

The Bharatiya Janata Party (BJP), which has ruled Gujarat for 27 years, is trying to retain power in the State for the seventh term in a row. If it succeeds, it will equal the record of the Left Front government which won the West Bengal elections for seven consecutive terms till 2011.

This time, the BJP faces competition not just from its traditional rival Congress but also the new poll entrant Aam Aadmi Party (AAP), which has tried to position itself as the main challenger of the ruling party.

The BJP and the Congress are contesting in all 89 seats.

The Arvind Kejriwal-led AAP is contesting in 88 seats. Its candidate from Surat East constituency had withdrawn his candidature, leaving the party with one less seat to contest in the first phase.

Gujarat records 18.95 % voting till 11 a.m. on 89 assembly seats of Saurashtra and South Gujarat districts in the first phase of polling. — The Hindu Cricketer Ravindra Jadeja on Thursday cast his vote at a polling station in Jamnagar in the first phase of the Gujarat Assembly elections and appealed to people to vote in large numbers.

“I appeal to the people to vote in large numbers,” said Ravindra Jadeja.

Congress MLA Paresh Dhanani cast his vote for Assembly elections in Gujarat in a bizarre manner as he carried a ‘gas cylinder’ with him on the bicycle he was riding.

With the intention to underline the issues of high fuel prices, inflation and joblessness, the Congress MLA from Amreli went to the polling booth on a bicycle with a cylinder on it.

While talking to ANI, Paresh Dhanani charged the Bharatiya Janata Party (BJP) for conspiring to make Gujarat a slave within the walls of selfishness and fear.

“The BJP conspired to turn Gujarat into a slave between the walls of selfishness and fear. Because of the government’s failure, inflation and unemployment are regularly increasing. A gas cylinder costs over Rs 1100, electricity is expensive, the price of transportation has skyrocketed, education is being privatised, government schools are shut, more than 3.5 lakh people lost their lives to Corona. I believe there is extreme distress due to the BJP’s failure,” Paresh Dhanani said.

He further said that he has voted to defeat inflation.

“My vote will open the doors of new opportunities for the youth with a new government. There will be a transition of power and Congres will come,” he added.— ANI

100-year-old casts her vote in Umargam 100-year-old Kamuben Lalabhai Patel on Thursday exercised her franchise in Umargam in the first phase of the Gujarat Assembly elections.

Many senior citizens are stepping out to cast their vote amid the first phase of polling that is underway in the State.

4.92% turnout in first hour of polling in Gujarat

An average 4.92% voter turnout was recorded in the first hour of polling on Thursday in the first phase of the Gujarat Assembly elections in 89 seats across 19 districts Saurashtra-Kutch and southern regions, the Election Commission said. People wait in queues to cast their votes during the first phase of Gujarat Assembly elections, in Rajkot on December 1, 2022.
| Photo Credit:
PTI

The EC tweeted a picture of a centenarian voter, Kamuben Patel, proudly showing her inked finger after casting her vote at a polling station in Umbergaon Assembly constituency in Valsad district.

Surat district recorded a turnout of about four%, while Dang and Tapi, two tribal-dominated districts in the south region recorded brisk voting 7.76% and 7.25%, respectively.

Porbandar recorded the lowest turnout of 3.92% so far, while Kutch district reported five% polling, the EC said in its latest update.

The Union Home Minister Amit Shah urged voters of the first phase to vote with unprecedented enthusiasm and numbers to continue this development journey.

“In the last two decades, Gujarat has become synonymous with development and peace, which every Indian is proud of. But this was possible because of the strong government elected by the people of Gujarat. I appeal to the voters of the first phase to vote with unprecedented enthusiasm and numbers to continue this development journey,” Mr. Shah tweeted.

Congress leader Rahul Gandhi appealed to voters of Gujarat to vote for employment, cheap gas cylinder and a progressive future for the State.

“There is an appeal to all the brothers and sisters of Gujarat, vote…for employment, cheap gas cylinder, for loan waiver of farmers, for the progressive future of Gujarat, vote in large numbers and make this festival of democracy a success,” Rahul Gandhi said in a tweet. — ANI

Exuding confidence that the BJP will win with a good margin, BJP candidate from North Jamnagar Rivaba Jadeja on Thursday said that they would focus on the overall development of the State after forming the government. Rivaba Jadeja was speaking to media persons after she cast her vote in Rajkot.

“There is no difficulty. There can be people of different ideologies in the same family. I have trust in the people of Jamnagar, we will focus on overall development, and this time as well BJP will win with a good margin,” said BJP’s Rivaba Jadeja.

She also requested people to vote in large numbers while considering this festival of democracy as a part of the responsibility. — ANI

Madhya Pradesh Governor Mangubhai Patel and his wife cast their votes on Thursday at a polling booth in Navsari, in the first phase of the Gujarat Assembly elections.

After a gap of two days, Prime Minister Narendra Modi will once again return to the Gujarat election campaign trail and this time with a three-hour-long mega roadshow spanning across 16 Assembly constituencies for the second phase of State Assembly elections.

According to Bharatiya Janata Party (BJP), this mega show will cover more than 50 km starting from the Naroda Gam and ending at Gandhinagar South constituency.

The Prime Minister’s roadshow is likely to begin at 3:30 p.m. in the afternoon and is expected to go on till 6:30 p.m. this evening with PM Modi making at least 35 stops at the memorials of prominent personalities including Pandit Dindayal Upadhyay, Sardar Vallabhbhai Patel and Netaji Subhas Chandra Bose on the way.

This road show by the Prime Minister is expected to pass through 16 Assembly constituencies that go into polls in the second phase of the Gujarat election on December 5. – ANI

As the voting for the first phase of the Gujarat Assembly elections began on Thursday, Prime Minister Narendra Modi called upon people, especially first-time voters to come out in large numbers to exercise their franchise.

“Today is the first phase of the Gujarat elections. I call upon all those voting today, particularly first-time voters to exercise their franchise in record numbers,” PM Modi said in a tweet.

Today is the first phase of the Gujarat elections. I call upon all those voting today, particularly first time voters to exercise their franchise in record numbers.

Polling began at 8 a.m. on Thursday for the first phase of Gujarat Assembly elections in 89 out of the total 182 seats across 19 districts of Saurashtra-Kutch region and southern parts of the state to decide the fate of 788 candidates. Polling underway for the first phase of Gujarat assembly Election for 89 constituencies. The result will be declared on December 8, 2022.
| Photo Credit:
Vijay Soneji

The voting is being held across 14,382 polling stations, of which 3,311 are in the urban and 11,071 in rural areas, the office of the state Chief Electoral Officer (CEO) said.

Live webcasting is being done from 13,065 polling stations to keep a close eye on the process, it said.

A total of 34,324 ballot units, an equal number of control units, and 38,749 Voter verifiable paper audit trail (VVPAT) machines are being used for the election in the first phase, the release said.- PTI

COP15 biodiversity meeting seeks to save 'planet in crisis'