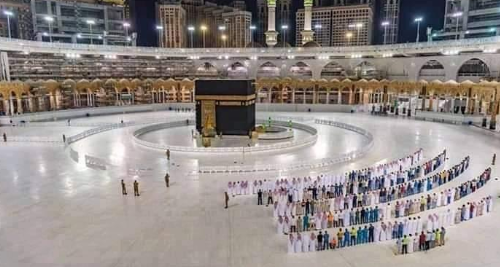 Hajj with only 1000 Pilgrims this Pandemic

Amongst the five pillars of Islam, Hajj is one of them and is obliged by all the believers who are physically and financially capable. Every year the convention is at its peak and people from all around the world gather in the holy cities of Saudi Arabia which are Mecca and Medina, to perform the rituals. Both shrines usually hosted millions of visitors for annual rites.

It was scheduled to be in late July this year with millions of pilgrims, but because of the global pandemic, this will take place with just around 1000 being only the country’s residents. People residing outside KSA will not be allowed to perform it until the pandemic recedes.

The government announced that they will hold a “very limited” gathering this year with all the Covid-19 safety measures. This step is taken to prevent the further spread of the virus in the country.

Saudi’s Hajj minister Mohammad Benten announced that the government is reviewing the number of Hajj pilgrims. “Around 1,000, maybe less, maybe a little more and this year’s event is expected to start on July 28,” he said

“The number won’t be in tens or hundreds of thousands this year,” he added.

Health Minister Tawfiq al-Rabiah reportedly said that all the pilgrims will be tested for Coronavirus before the commencement of the pilgrimage. They will also be asked to remain quarantined in their houses after the pilgrimage ends.

He also stated that no one above the age of 65 or with a chronic illness will be allowed to perform the pilgrimage this year considering the outbreak of the global pandemic.

The decision taken by the authorities responsible has created a sense of disappointment among the Muslims as many of them wait for years to perform or even get a chance to go there. Most of them have taken the matter to Twitter showing their discontentment regarding the decision taken.

The Kingdom which relies on most of its wealth from Hajj and Umrah will have to face a huge leap in its income generated from the tourism industries. Nevertheless, curtailed hajj this year is the hour of the need and we all should stand in the favor of the decision till the things normalize.

Locusts Swarm Descends on Delhi, Here is How We Can Deal with the Crisis