by TSA Desk
in News
Reading Time: 8 mins read
A A 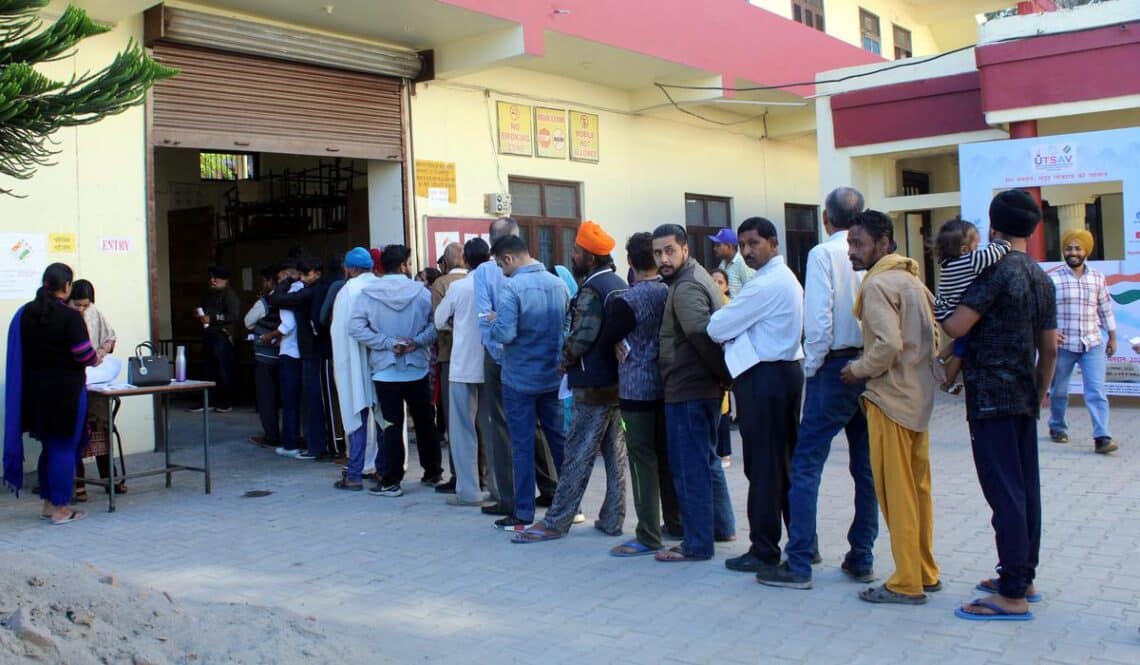 Voting for the Himachal Pradesh Assembly elections is underway at 68 constituencies across the State on November 12.

The State has recorded nearly 18% voter turnout till 11 a.m. with Mandi witnessing  21.92% turnout while, Lahaul and Spiti recorded just 5%.

In the high-stakes battle, the ruling BJP is hoping for an encore on the back of its development agenda, while the Opposition Congress is urging voters to go by the four-decade old tradition of voting out incumbents. The Aam Aadmi Party (AAP) is also trying its luck in the electoral battle.

Of the 5.02% votes polled in Himachal Pradesh Assembly elections so far, the highest turnout has been recorded in Sirmour at 6.26%, followed by Mandi at 6.24% and Hamirpur at 5.61%.

Voters in Himachal queue up outside polling booths

From Shimla to the icy heights of Spiti, voters across Himachal Pradesh stepped out on Saturday to elect a new state government. It is a crucial test for the BJP hoping to beat precedent and return to power as well as for the Congress looking for electoral revival.

Voting began at 8 a.m. on a slow note with an Election Commission official saying only 4% polling was registered till 9 a.m. – PTI

Former Himachal Pradesh Chief Minister Prem Kumar Dhumal, his son and Union Minister Anurag Thakur, and their family cast votes for the Assembly elections at Samirpur in Hamirpur on Saturday.

As voting began for the Himachal Pradesh polls, Congress leader Rahul Gandhi on Saturday said the state will vote for the return of the old pension scheme and employment.

Himachal Pradesh has registered 4.89% turnout after first hour of polling, as per Voter Turnout app. Mandi has recorded the highest turnout so far at 6.24%, followed by Una at 5.47% and Hamirpur at 5.61%.

Himachal Pradesh Congress chief Pratibha Singh, her son and party MLA Vikramaditya Singh cast their votes for in Rampur, Shimla, for the Assembly elections “We’d like to tell people of Himachal Pradesh to vote for development and work. We’re confident of winning 40-45 seats,” she said.

We’d like to tell people of Himachal Pradesh to vote for development & work. Congress always worked for development & in the time to come only Congress can take that work forward in the state. We’re confident of winning 40-45 seats: #HimachalPradesh Congress chief Pratibha Singh pic.twitter.com/IxnXuzNhWU

Close contest between BJP and Congress

A close fight is on the cards in the Assembly polls in Himachal Pradesh, with the ruling BJP hindered by anti-incumbency sentiments, while the challenging Congress has been affected by factionalism and fragmented leadership within its State units.

The bipolar nature of the electoral battle is unlikely to change this time around. The Aam Aadmi Party (AAP), which is contesting 67 out of 68 seats after an emphatic win in neighbouring Punjab earlier this year, hardly seems to have found a foot on the ground among Himachal Pradesh’s voters. – Vikas Vasudeva

Chief Minister Jairam Thakur and his family cast their votes in Seraj Assembly constituency at polling station 44 in Mandi on Saturday. “Confident of a grand win. Feedback is great. Most importantly, people are casting their votes peacefully,” he said.

Himachal Pradesh Chief Minister Jairam Thakur on Saturday urged voters to come out in big numbers and enthusiastically participate in the “festival of democracy”. He said every vote will help build a prosperous Himachal Pradesh.

“First vote, then refreshments. Dear fellow state residents, today is the day of voting. My humble request to all voters of Himachal Pradesh is to participate in this festival of democracy with full enthusiasm,” he said in a tweet in Hindi.

With the AAP throwing its hat into the electoral ring, the divide among voters is bound to increase and the AAP could play the ‘spoilsport’ for the two parties in seats, where there are close contests between the traditional heavyweights.

The party is seeking ‘a chance’ from voters in Himachal Pradesh against the traditional parties to let it replicate the Delhi and Punjab model of governance, where it’s in power. After its win in the Assembly elections in Punjab, the AAP stepped up the tempo of its electioneering in April this year. However, close to the election, AAP’s prominent leaders were seen channelizing their energy more in poll-bound Gujarat and it was the local leadership that largely canvassed for the party in the State. – Vikas Vasudeva

As polling for the Assembly elections begins in Himachal Pradesh on Saturday to elect a new government, Union Home Minister Amit Shah appealed to voters especially mothers, sisters and youth to vote in maximum numbers.

About 30,000 security personnel including 67 companies of Central Armed Police Forces (CAPFs) and over 11,500 state police personnel will be deployed for peaceful conduct of polling in Himachal Pradesh on Saturday.

With Himachal Pradesh going to the polls on November 12, the State’s high-pitched election campaign came to a halt on Thursday. Traveling around the State amid the political slug-fest gave a sense that there is a palpable narrative about bringing in a change, making it a close battle for the ruling Bharatiya Janata Party (BJP) to retain its government.

Himachal Pradesh has been a bipolar electoral arena for the last three decades, with the Congress and the BJP alternately forming the governments, and the contest remains between these two traditional rivals this year as well.

Prime Minister Narendra Modi urged Himachal Pradesh voters on Saturday to enthusiastically participate in the “festival of democracy” and register a voting record.

In a tweet, PM Modi also greeted the young voters who will be exercising their franchise for the first time.

Only 24 women candidates in fray

Out of the 412 candidates in the electoral fray, 24 are female, while 388 are male. A total of 55.93 lakh voters are on the electoral rolls of the State and will cast their ballot in 7,881 polling stations, according to official data.

In the high-stakes battle for Himachal Pradesh, the ruling BJP is trying hard to defend its turf, and the Congress has emerged as the main challenger, even as the newcomer the Aam Aadmi Party (AAP) is also trying its luck in the electoral battle.