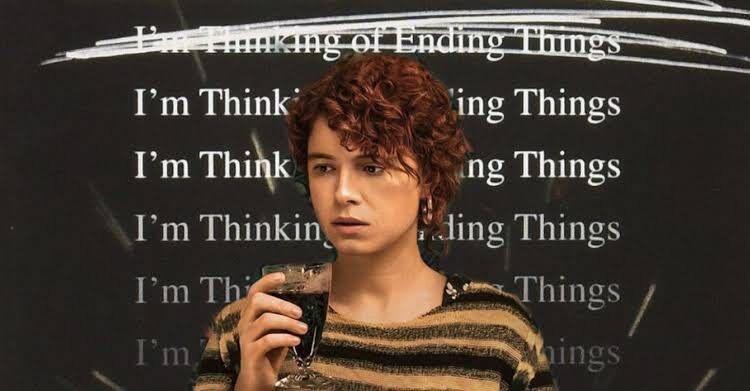 From the maker of Eternal Sunshine of a spotless mind and Anomalisa comes another mind-boggling and wildly amazing movie- I'm thinking of Ending Things. Read our review and we bet it will spark your interest!

“People like to think of themselves as points moving through time. But it is the opposite. We are stationary. Time passes through us blowing like the cold wind”

Based on the 2016 hit novel of an equivalent name by Ian Reid, ‘I’m Thinking Of Ending Things’ is an intriguing and infrequently comical movie that touches on the themes of identity and loss whilst questioning the concept of fate and predictability of life.

Set out on a road trip to meet her boy friend’s parents, the Young Woman called by various names (Lucy, Lucia, or Louisa) during the transition- is lost in her own endless thoughts while in some spectacles it is shown as if Jake can listen to what she is thinking. As they drive on, the distance between them widens setting an air of melancholy and unspeakable sorrow with several forced conversations. During the journey and several times in the film, the young woman reiterates the phrase “I’m thinking of ending things.” Even the air echoes of a relationship on the brink of ending.

Through the movie, a janitor is seen in a high school closely observing the musical night rehearsal, watching old films- even seeing himself in one of them.

As they reach Jake’s farmhouse, the real mind-scrambling begins. Jake’s parents are somewhat odd and unnatural- but the young woman seems to be actually liking them. With several outbursts of anger and strange laughs, the real surrealism of the film roll about. The woman sees several versions of Jake’s parents- when they were young, and eventually, as they get old and to the time when they die. In a turn of events, the Young Woman discerns that the painting she exhibited as her own, was someone else’s. She also sees a book laid open written on it the same poem she narrated to Jake during their road trip. 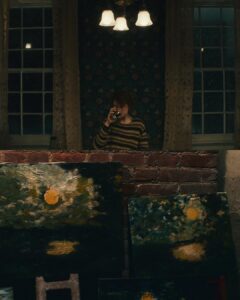 Looking closely, the tapestry in the house, as well as the colour of her dress, alters as the film goes on. At this point, the audience is left perplexed trying to put the frayed ends together. Here, you will be lost. You might want to close it- your mind scampering for the pieces- you are trying to make sense out of the film- putting the two and two together.

There are many things to unpack from this movie. From the beginning where so much of it is a mystery to the viewer that they can’t help but skip through the scenes to the climax where something fascinating is revealed about the characters.

And somehow, amidst all of the shifting perspectives and timeframes and overall blurring of lines, it also manages to manoeuvre you to tears whilst it leaves you bewildered and unmoored. What you need to see is not the big things- but the minute details- the dress, the tense, the dialogues, the colours etc, each of them revealing their own mystery.

The film is dark and opaque, troubling and disturbing, enjoyable and remarkable as well. It is the only film which will affix your eyes to the screen, but till the end, you will be left with the same question “What is going on?” Like a poem, it has thousands of interpretations, deep messages tangled and disturbing thoughts that will begin afterwards.

As with a number of Kaufman’s previous films, it’s not going to fit certain people’s taste thanks to the shortage of a coherent narrative but we found it to be a wonderfully bizarre and fiendishly clever movie capped off with a joyous final scene. In terms of sheer enjoyment it doesn’t quite match up to the quality of his last feature ‘Anomalisa’ but, like every Kaufman film, it’s definitely worth a watch.

The movie is great performance-wise as well. Both the leads, Jessie Buckley and Jesse Plemons have played their parts as Lucy and Jake well, David Thewlis as Jake’s dad was also promising but who we loved the most is Toni Collette, who so brilliantly showcased the absurdity and craziness her character required.

The movie is a character-driven movie where the action is through the conversations of the characters and all the actors have done justice to their parts, which made the concept delivery of the movie, a success. It somewhat forces you to think about your everyday life.

The musical theme of the movie gives a pleasant touch to it.

The last part of it made us a little confused as not many of our questions were answered but overall, we loved the movie and would definitely recommend it, for at least a one time watch. I’m thinking of ending things is now streaming on Netflix. Watch it and leave your review in the comments section below!

Celebrating Roald Dahl’s 104th Birth Anniversary: The Man With The Sweet Tooth That Never Grew Up