by TSA Desk
in News
Reading Time: 6 mins read
A A 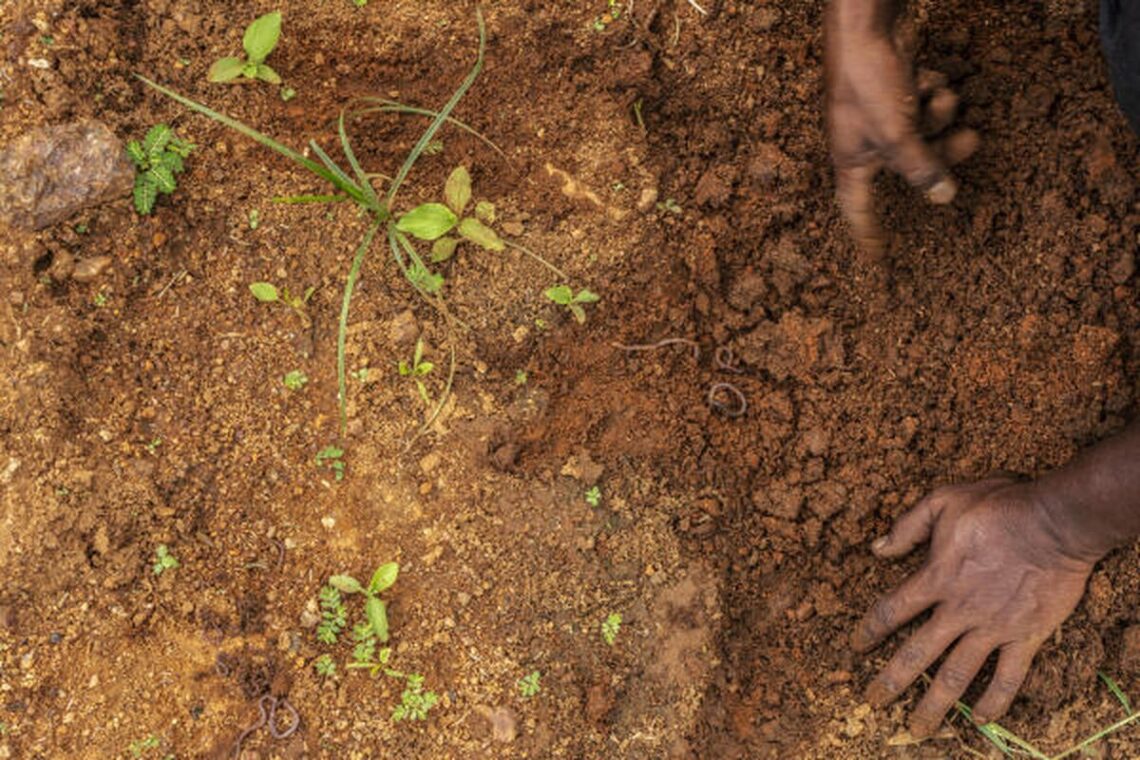 In the Anantapur region of Andhra Pradesh, droughts, low-rainfall and extreme heat are a way of life

In the Anantapur region of Andhra Pradesh, droughts, low-rainfall and extreme heat are a way of life

Ramesh Hanumaiya digs a few inches into his field with his hand and examines the soil. There is movement in the thick, brown earth: Tiny earthworms being disturbed from their homestead.

A handful of dirt filled with earthworms might not seem like much, but it’s the result of seven years’ work. “This soil used to be as hard as a brick,” said 37-year-old Mr. Ramesh. “It’s now like a sponge. The soil is rich with the nutrients and life that’s needed for my crops to grow on time and in a healthy way.”

Like Mr. Ramesh thousands of other farmers in Anantapur, a district in the southern Indian state of Andhra Pradesh, have taken to what’s known as regenerative agricultural practices. Techniques like using natural fertilisers and planting crops alongside trees and other plants have been successful at combating desertification, the process of once-fertile ground turning into dust. Climate change is exacerbating the loss of arable land as temperatures rise and rainfall becomes more irregular. 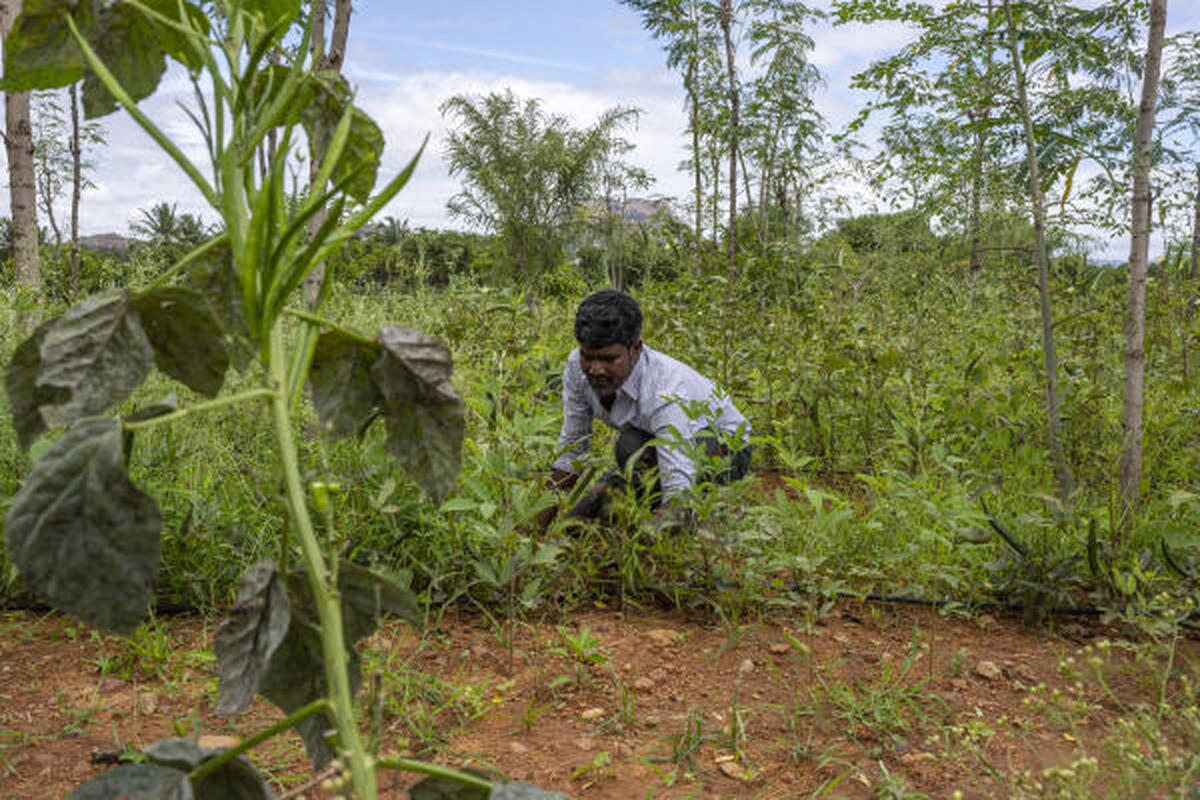 Described by the United Nations’ desertification agency as one of the greatest threats to human society, it’s estimated that over 40% of the world’s land is already degraded. Around 1.9 billion hectares of land, more than twice the size of the United States, and roughly 1.5 billion people globally are affected in some way by desertification, according to U.N. estimates.

“It was always a dry region but we knew when it will rain and people used to farm accordingly,” said 69-year-old Malla Reddy, who runs a non-profit that encourages natural farming practices in the region. “Now what’s happening is that the rainfall can happen at any season, farmers are unable to predict this and many a time lose their crops,” he said.

Mr. Reddy’s non-profit works with over 60,000 farmers across 300,000 acres of land in the district, supporting individual farmers to restore unproductive land across the entire region.

Most Indian farmers rely on rain-fed agriculture, with about 70 million hectares — about half of all farmed land in India — dependent on downpours. These lands are also the ones most subject to poor agricultural methods, such as excessive use of chemical fertilisers, over tilling and mono-cropping, the practice of planting just a single crop each year, experts say.

Mr. Reddy, the director of Accion Fraterna Ecology Centre, and the farmers his organisation supports use methods known as natural farming and agroforestry to avoid spoiling the land. Natural farming replaces all chemical fertilisers and pesticides with organic matter such as cow dung, cow urine and jaggery, a type of solid dark sugar made from sugarcane, to boost soil nutrient levels. Agroforestry involves planting woody perennials, trees, shrubs and palms alongside agricultural crops.

And while most other farmers in the region either grow groundnuts or paddy using chemical fertilisers, natural farmers grow a variety of crops. Multi-cropping ensures that soil nutrients are periodically restored, as opposed to distinct seeding in harvesting seasons, Mr. Reddy said.

For other farmers in the area, much of the land is becoming unusable for cultivation because of the extensive use of chemical fertilisers, pesticides, and weedicides.

“Every week there are many trucks with speakers cruising through our villages, asking farmers to buy this pesticide or that weedicide. Their marketing is incredible and farmers get fooled,” says E.B. Manohar, a 26-year-old natural farmer in the village of Khairevu, also in Anantapur district. E. B. Manohar farmer sprays natural fertilizer on his crop at his farm in Khairevu village in Anantapur district in the southern Indian state of Andhra Pradesh, India
| Photo Credit: AP

Mr. Manohar quit his job as a mechanical engineer in Bengaluru, sometimes called “India’s Silicon Valley,” to take up natural farming in his home town. On his farm he grows tomatoes, chilies and cabbage, among other crops and vegetables.

“I have also started supplying natural fertiliser and weedicide to other farmers in my village,” Mr. Manohar said. “Since they have seen that my investment is low and my returns are good, more and more people are getting interested in trying this out,” he added.

But for efforts like Mr. Manohar’s and Mr. Reddy’s to make a national impact, experts say these initiatives need to be rolled out on a wider scale.

“Desertification is among the biggest challenges facing India,” said N.H. Ravindranath, who helped author several U.N. climate reports and has researched desertification in the country for the last two decades. He said that although the land restoration work in Anantapur is commendable, scaling up is the real challenge. E. B. Manohar farmer applies cow dung, a natural fertilizer on his crop at his farm in Khairevu village in Anantapur district in the southern Indian state of Andhra Pradesh, India
| Photo Credit: AP

“We need serious financing for climate adaptation and government policies that encourage restoration. These are the only things that will make this impact on scale,” he added. Money for adapting to harsher weather conditions has long been discussed at U.N. climate conferences like COP27, as the effects of climate change make it harder for many to sustain their livelihoods. Some funding for vulnerable nations has been promised but much of it hasn’t been fulfilled.

Around 70% of all land in the world is already converted by humans from its natural state for food production and other purposes and around one in five of those converted hectares are already degraded, said Barron Joseph Orr, lead scientist at United Nations Convention to Combat Desertification.

“We’ve lost productivity in those lands, so we’re undercutting what we’ve converted. So we’ve got a big problem here,” Mr. Orr said. “We need to incentivise sustainable land management for small farmers and herders. In our conventional form of farming, we’re dependent on chemical fertilisers, which works, but it basically short circuits the natural processes in the soil which stops it from regenerating, making it unusable in the long run,” he added.

Mr. Orr also added that land restoration can prevent planet-warming gases from escaping degraded ground and going into the atmosphere.

Back in Anantapur, Ajantha Reddy, a 28-year-old natural farmer tends to his sweet lime crops. Sweet limes require farmers to wait for many years before they can see any return on their labor and investment. Reddy is not worried, though.

“The trees have grown in 17 months as much as I would have expected them to grow in four years,” he said as he trimmed his fruit crops. Mr. Reddy quit his job as a software engineer in Bengaluru during the COVID-19 pandemic and returned to his village in Anantapur to farm.

For Mr. Reddy, the satisfaction of seeing his crops and his home town thrive are a big enough incentive to continue natural farming practices for the foreseeable future.

“I have no intention of going back to Bangalore. When I came home during the pandemic, I thought, ‘why should I go and work for someone else? I have land to cultivate and I could give livelihood to a few people,’” he said. “That thought made up my mind.”