The much-loved cricket league IPL is back in the air. Reportedly, BCCI is in talks to organise the league in India as soon as possible. Earlier too, BCCI president Sourav Ganguly and chairman of IPL Brijesh Patel also informed that the board is planning on organising the league somewhere around October-November. 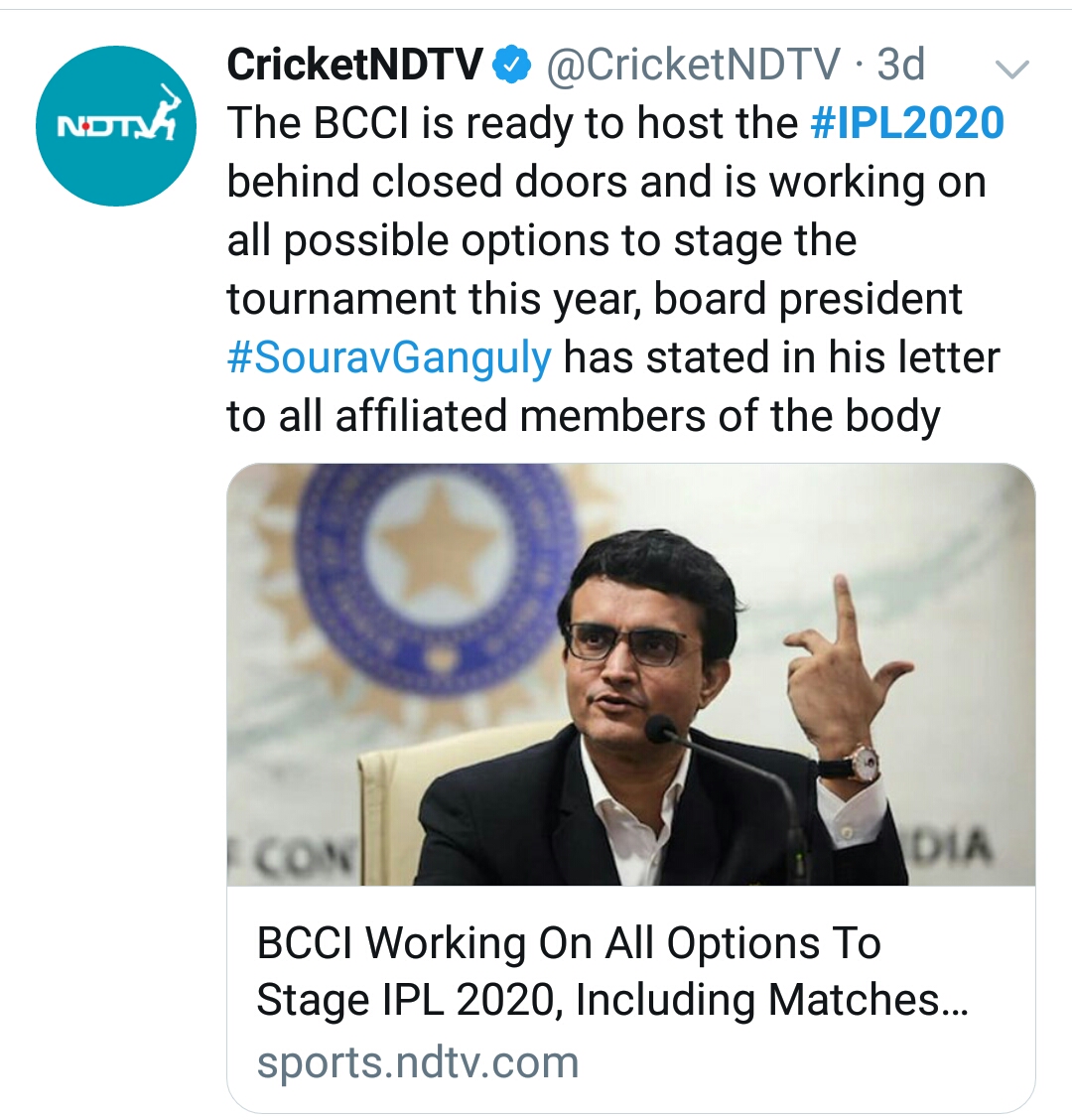 Not just IPL but various sportsmen from franchises around the world are already back on the field. Bundesliga, the famous German football league aims to achieve a 20,000 sets goal before the season ends. Spain’s La Liga continued June 11 onwards and is testing players every day.

Venky Mysore, Kolkata Knight Riders CEO ponders over the risks and hurdles involved in organising IPL in the country. Thinking over Mumbai, he says, “If you imagine a city like Mumbai, which has four quality grounds and a fifth nearby in Pune, every side can have their own team hotel. We can explore if rooms need to be next to each other to ensure spacing between players, personalised towels, water bottles.” As Mumbai and Delhi, India’s biggest international cities become India’s Coronavirus outbreak hotspots, the vulnerability is even higher. Mysore suggests that we can think over things to make the league more intriguing such as awarding a “COVID compliance champion.”

Although for now, BCCI is waiting for ICC’s announcement pertaining to T20 World Cup.
Arun Dhumal, BCCI’s treasurer says that “Once we get a window of at least 40 days for IPL, we will figure out safety protocols, player travel, bio-secure arrangements, etc.”

No Data On Migrant Deaths, So No Compensation: Government To…

Wildfires in California rages out of control; Killed 33

But it’s not as easy as it seems because international travel is still banned in the majority of the countries around the world including India. Mysore says that “IPL is IPL because it has the best from around the world. I don’t see value in the IPL without foreigners.”

Head of Broadcaster Star Sports,
Uday Shankar suggests that “They can be brought in charter flights. Earlier, they used to come five days in advance, now they will have to come two weeks before the game, be in quarantine, and be more careful when training.”

Mysore, keenly thinking over every detail says that “Travel, hotels, kits, food, gym, bus seating are all things to be minutely looked at. But we are talking of a finite group with eight franchises, and say 160 players and 80 support staff. That’s around 250 testing kits should be manageable.”

Cricket administrator Ratnakar Shetty however, has his doubts. “It’s not easy. The arrival of teams, SOPs about hotel stay, the movement to and from the stadium, keeping track of production crew and other ground staff. It is not impossible to pull off, but rules that apply to citizens will have to apply to star cricketers.”

Veteran Cricket administrator Niranjan Shah also has second thoughts. “This is an extraordinarily difficult moment in history. And it is ridiculous to even think of cricket right now. First, let’s bring the situation back to normal. “Can we risk even one player getting infected?”

It waits to be seen whether the Premier League is decided upon or not. Given the fact that India may soon become the world’s worst Coronavirus affected countries, there’s a much higher chance that cricket fans would have to wait longer to see their players flexing off on the pitch.