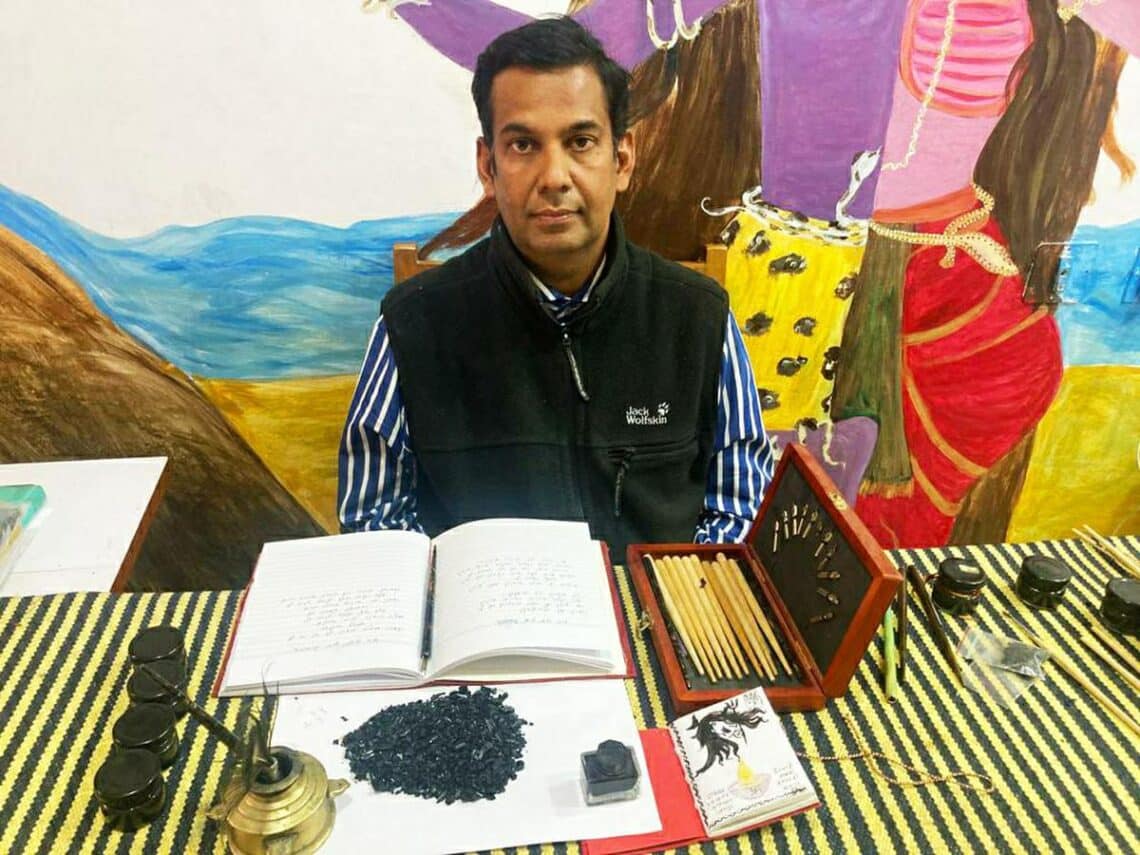 Fourth generation of the family travels from Germany to Jaipur at Deepavali every year to make and sell the ink, which is still used by businessmen, universities and traditional healers

Fourth generation of the family travels from Germany to Jaipur at Deepavali every year to make and sell the ink, which is still used by businessmen, universities and traditional healers

Keeping alive a tradition dating back to the reign of Kachhwaha rulers, a Vaishya family in the Walled City of Jaipur is still manufacturing the indelible Kali Syahi or black ink used 250 years ago for issuing the royal firmans (decrees) and writing the account ledgers. The fourth generation of the family now manufactures the ink on Deepavali every year.

While the erstwhile royal family used the ink for its official transactions and writings, the businessmen of the princely State used it to maintain their accounts. Even Universities established after Independence awarded degrees written with this ink to their students. The ink, with its promise of permanence, was believed to ward off evil and bring prosperity to its users.

The manufacturers of the ink, who lived in the nearby Sanganer town, were invited to the Walled City by the Jaipur royals 255 years ago and given a shop in Tripolia Bazar at a nominal price. The modest shop, which has now been divided within the family, still exists with a descriptive name, Kali Syahi Ki Dukaan.

The great-grandson of that Hari Narayan Bomb of Sanganer who recieved the patronage of the royals is Lokesh Bomb, a jeweller now settled in Idar-Oberstein in Germany. However, he still makes it a point to be in Jaipur on Deepavali every year and manufactures the ink at his ancestral shop. Mr. Bomb then sells the ink to Marwari businessmen who follow the practice of starting their accounts with the sacred ink after Lakshmi Pujan.

Mr. Bomb told The Hindu that the indelible ink was made of natural ingredients and its manufacturing involved a traditional procedure handed down from generations. “The black ink is prepared on a no-moon night with the chanting of mantras. It is made of kaajal (homemade mascara), gondh (edible gum) and a few other herbal ingredients which are locally sourced,” he said. The youngest of three brothers, Mr.Bomb learned the ink-making process from his mother.

The ink also has medicinal properties, as some of its ingredients were earlier used in the traditional Ayurvedic system for the treatment and healing of wounds. Some prominent Vaidyas and Hakims (traditional healers) in Jaipur have been using the ink for treating skin disorders such as eczema.

For several years, Padma Shri awardee and revered saint Narayan Das Maharaj of Triveni Dham near Jaipur visited the Kali Syahi shop on Deepavali every year in order to consecrate the ink before its release for sale. Following the Maharaj’s death in 2018, one of his disciples comes to the shop and performs the ritual.

Mr. Bomb, who has completed a course on “entrepreneurship and innovation in the age of change” from the London School of Economics and Political Science, said he intended to promote the ink in Europe, taking a family tradition to an international level. “Though there is hardly any demand for ink in this age of technical advancement, I have kept the tradition going by collecting the ingredients patiently and meticulously,” he said.

While the traditional art of writing with ink may have lost its charm with the advent of ball pens, computers and smart phones, Mr. Bomb said his passion to preserve the legacy of the indelible black ink was a tribute to his forefathers who had worked hard to develop it. “When I gift my clients with a bottle of black ink and a feather pen, they are extremely delighted with these exotic items,” he said.