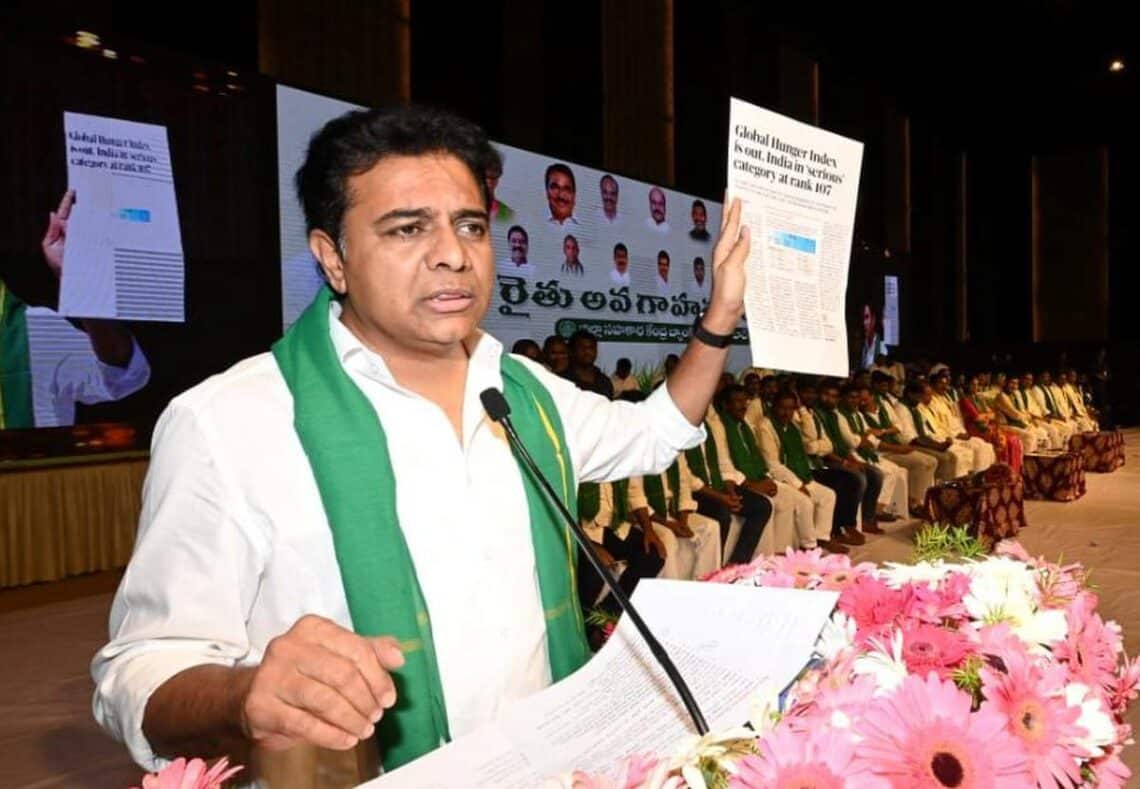 Minister for Industries, IT and Urban Development K.T. Rama Rao, who is also the working president of Telangana Rashtra Samithi (TRS), asked people to cut Bharatiya Janata Party (BJP) to size following one more of its government’s ‘dubious achievements‘ of keeping the country at 107 th position in the Global Hunger Index.

He stated that the country’s position in the matter has slipped from 101 st position last time out of a total 121 countries assessed for GHI. “Yet another day and yet another amazing achievement of NPA Government. India slipped from 101 st to 107 th rank in Global Hunger Index. Instead of accepting failure, am sure BJP jokers will dismiss the report as anti-India now”, he said in a social media post on Saturday tagging a post of The Hindu and hashtag Achhe Din.

Later, speaking at a farmers’ awareness meeting held at Manneguda in Ibrahimpatnam constituency on the outskirts of the city, he remarked that the NPA rulers have kept the country below Sri Lanka (64 th rank), Nepal (81), Bangladesh (84) and Pakistan even among the South Asian countries. Only Afghanistan (109) was ranked below India.

He observed that except for Telangana, farmer-friendly policies are not being implemented in any other State and the farming community is in a crisis in 27 out of 28 States. He reminded that just a decade back there were instances of people requesting the electricity authorities to supply power to bathe at an agricultural pump-set in the event of death of a person.

Besides, there were struggles for power supply to farm connections, water for irrigation, seed and fertilizer with Mahabubnagar and Nalgonda at the top in the matter of farmers’ suicides. However, Nalgonda is on the top in paddy production now and it had become possible only with statehood to Telangana, he said.

Uninterrupted free power to farm pump-sets, investment support under Rythu Bandhu and other measures had taken the production of paddy from 68 lakh tonnes in 2014 to 3.5 crore tonnes now with Centre shedding its responsibility from procurement. Similarly, cotton production has gone up from 35 lakh bales to 65 lakh bales.

Minister for Agriculture S. Niranjan Reddy said Telangana is providing free power to nearly 30 lakh agricultural pump-sets and transferred nearly ₹58,000 crore for landholding farmers under Rythu Bandhu with Munugode getting a maximum benefit of ₹1,031 crore for nine seasons. About 1.46 lakh farmers there are getting investment support for their 2.65 lakh acres of landholding. However, it is unfortunate that the country is at the bottom of GHI index table due to anti-farmer policies of the Centre. Minister for Education P. Sabitha Indra Reddy also spoke.