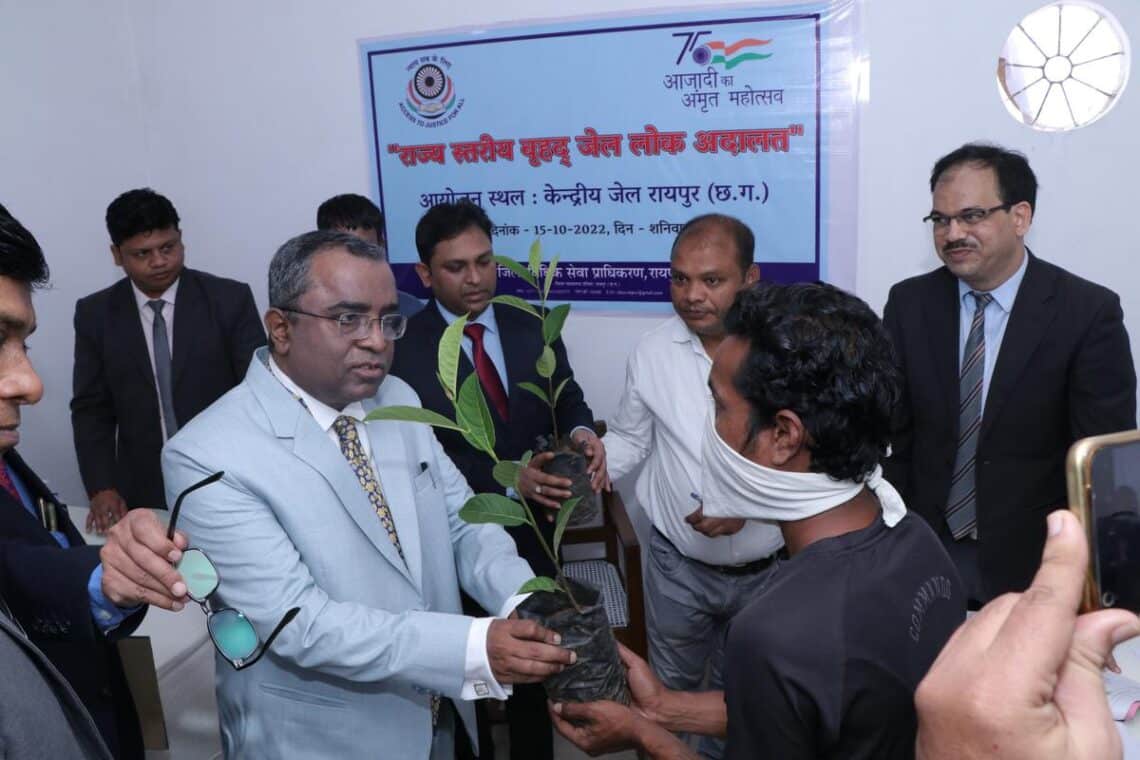 Over 450 prisoners have walked free in Chhattisgarh after Lok Adalats — a first of its kind initiative anywhere in the country according to authorities — were set up in jails across the State on October 15.

These courts will be held every working Saturday and provide relief to undertrials, and in some cases convicted prisoners, by explaining their rights and legal options such as plea bargaining and settlement.

Justice Goutam Bhaduri of Chhattisgarh High Court, who is also the executive chairman of the State Legal Services Authority (SLSA), visited the Central Jail in Raipur and launched these Lok Adalats at all prison complexes simultaneously through the virtual mode.

According to Praveen Mishra, Secretary, Raipur District Legal Services Authority or DLSA, the objective of the exercise is swift disposal of cases and also to reduce the congestion in various jails.

There are over 20,000 prisoners lodged in various jails in Chhattisgarh, against a sanctioned capacity of 14,000, says Director General (Prisons) Sanjay Pillay. Of these, nearly 12,500 are undertrials, he adds.

Mr. Mishra says that while hearing a suo motu writ petition in the case of ‘Sonadhar Vs State of Chhattisgarh’, the Supreme Court sought suggestions to reduce overcrowding in Indian jails. “Earlier this year, the Hon’ble SLSA of Chhattisgarh came up with the suggestion of Lok Adalats. The suggestion was accepted by the Hon’ble Supreme Court and it issued directions in this regard,” he says.

All undertrials, who have been named in offences in the Criminal Procedure Code (Cr.PC) that are heard by a judicial magistrate – such as petty theft, house trespass, and cheating, are eligible for hearing in these Adalats. Additionally, those who have been arrested under preventive provisions for offences such as brawl or violation of special laws such as Excise Act or Railways Act are also eligible.

“They have to wait for long for their release as they are not aware about provisions such as plea bargaining where admitting to the crime after having spent a considerable time in prisons can get the remaining sentence reduced. Even if they know, they cannot always reach the courts. On the other hand, judges cannot leave the court during the working hours. So the Lok Adalats will act as a bridge allowing the undertrials to get swifter justice,” says Mr. Mishra.

Explaining their functioning, he adds that the cases were first identified in each district through discussions with the jail authorities. Then, para-legal authorities and panel lawyers were appointed to explain the initiative and its possible consequences to the prisoners.

“This provided them with an opportunity to pose their queries at a nascent stage so that at a further stage they could not claim that they were not briefed about the process completely,” he says.

The case files are then presented to two judges nominated by the SLSA visiting each jail and setting up of a special bench, where they become the presiding officers.

“These presiding officers tell the prisoners about the maximum sentence one faces and possibility of settlement if the complainant has given assent for the accused’s release. While they won’t use their magisterial powers, they can do so in certain cases. For example, if an accused admits to the crime and there are chances of him being released, but the complainant opposes it, the presiding officer has the discretionary power to set the former free,” says Mr. Mishra.

Of the 85 prisoners released in Raipur, there were also a few convicts who had completed their jail tenures but were unable to pay the fine amounts associated with it. In some cases, the DLSA identified the families they had lost contact with or connected with NGOs who came forward to pay the fines.

Yet, the number of those released (85) is barely a fifth of the 489 identified cases in the district. Explaining the primary reason for voluntary rejection of what would have been a fair shot at securing release, Mr. Mishra says it happens because they feel that while plea-bargaining may get them out of the jail, it will leave them with the taboo of being “convicted” for life.

“We take them through possible scenarios but legal services authorities cannot force anyone. Whether it is the accused or the victim or conviction or acquittal, what is paramount is justice for all and that should prevail,” says Mr. Mishra.