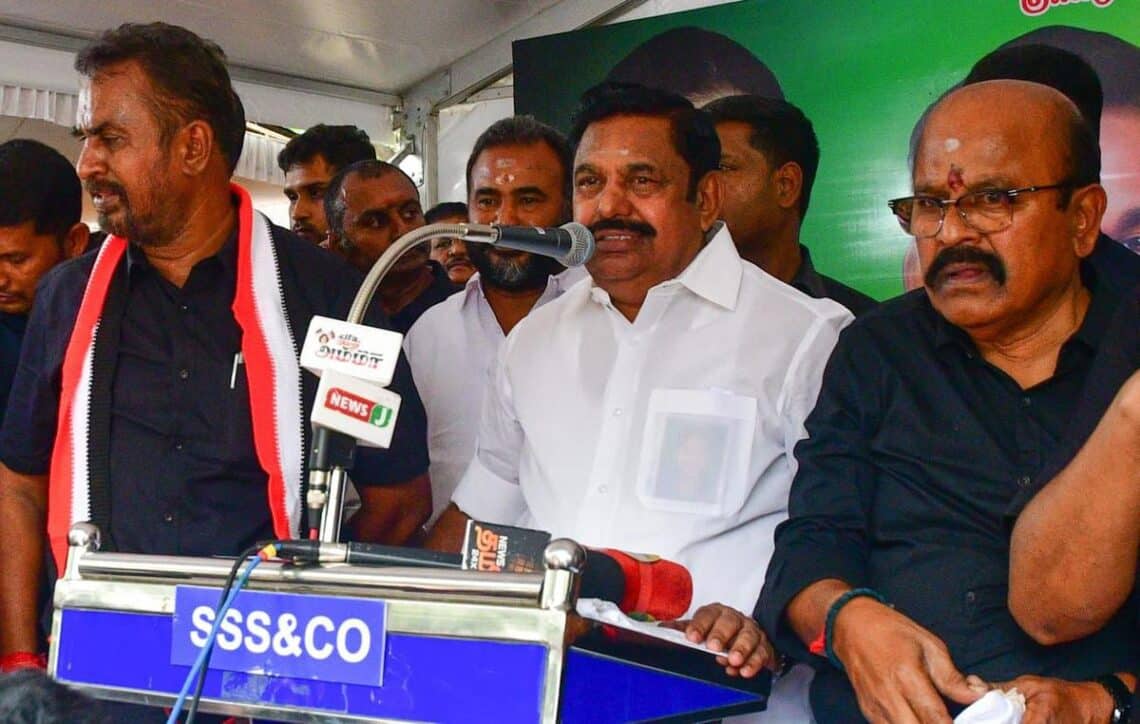 Addressing the inaugural of a fasting agitation by the party condemning the government for ignoring Coimbatore in development work “as a vindictive measure” for voting in favour of the AIADMK, Mr. Palaniswami announced that similar protests will be organised across the State in town panchayats on December 9; at panchayat unions on December 12 and at municipalities on December 13.

Terming M.K. Stalin “a doll” and “an inefficient Chief Minister”, he invited Mr. Stalin to an open debate on the achievements of the 10-year rule of the AIADMK (2011-21) and the 18-month rule by the DMK.

Referring to the recent speech by Mr. Stalin ridiculing him for petitioning the Governor, he reminded him that when the AIADMK was in power, Mr. Stalin, as Opposition leader had petitioned the Governor “10 times.”

“What is wrong in the Opposition petitioning the Governor, when there are irregularities in the governance,” he asked. He said that people were watching all this, and would give a befitting reply [to the government] in the 2024 Lok Sabha polls.

Mr. Palaniswami also ridiculed Mr. Stalin for inquiring with Health Minister Ma. Subramanian about the market response for his son’s movie during a morning walk. Is this the concern of the Chief Minister, he asked.

Listing out the awards received by the AIADMK government in highways, agriculture, electricity and water management, Mr. Palaniswami said that the AIADMK had won the highest number of awards from the Central government, and questioned Mr. Stalin’s contention that the AIADMK rule pushed the State backward.

Mr. Palaniswami also came down heavily on the police machinery for seizing a vehicle belonging to the AIADMK and cautioned the police not to act at the instructions of a Minister (in a veiled reference to Electricity Minister V. Senthilbalaji). The DMK has eight ministers who were earlier with the AIADMK and are like seasonal migratory birds, he said

The Opposition Leader also said that iron prices have gone up from ₹38,000 to ₹79,000 per tonne and cement prices were up by ₹140 and milk prices have gone up by ₹12. He urged the government to focus on these areas and bring down prices. He also wanted an immediate roll back on the property tax and electricity tariff hike.

A majority of the announcements by the DMK before coming to power are yet to be implemented, such as the subsidised rates for increased units of power consumed by the handloom and power loom sectors, a ₹100 subsidy for LPG cylinders and ₹1,000 as a monthly financial assistance for women head of families are yet to see the light of the day, he said, and so, could be seen as a poll gimmicks of the DMK.

Touching upon projects that were sanctioned and executed by the AIADMK in Coimbatore, Mr. Palaniswami said that the airport expansion, the western by-pass road and flyovers were commissioned, and he cautioned the DMK government not to shift the Vellalore Integrated Bus stand, else there would be a massive agitation. He also urged the DMK government to drop the acquisition of agricultural lands of 3,732 acres in Annur and shift industrial estates to drought prone areas.

A Guide to Understanding How a 10GBASE-SR Optical Module Works