From ‘Paro’ to Polyandry, India’s ill-fated women trafficked into marriage

What exactly is the cost of human life ? We say, every breath is precious and money can't buy it. Is that really true ? Let's find out .

For once imagine yourself being chained to something and watch your dreams being crushed right in front of your eyes, you can’t move or protest and all you can do is blend in the process of acceptance.

We all have seen ourselves bargaining to a street vendor for the cost of a fruit or a vegetable and as you read this, somewhere in India this too is happening, but this time it’s not a fruit or a vegetable, it’s a human, precisely a woman being subjected to a price tag which has its roots in India’s patriarchal and misogynist society but, where did it all began? and how far have we come into tackling India’s deep-rooted patriarchy? This needs to be addressed now.

The discrimination against girls remains extensive, particularly in rural and poor communities where they are considered as financial burdens. when parents marry their girls young, it is also to ensure they do not stake any claim to the parent’s property. The ongoing dowry system in India puts a great financial burden on the bride’s parents more so when they are not able to afford to pay the dowry and are unable to get their daughters married so this leaves them with one option. By selling their daughters they not only escape the whirlpool of dowry but also make some money.

Haryana is the hotspot for bride trafficking from distant parts of India. By preferring male child over female and indulging in horrific acts like female foeticide, it has constructed paths for traffickers without barriers. Minor girls are being trafficked across states, regularly raped and later blamed for not delivering male babies. That doesn’t stop here, women aren’t trafficked once, they’re trafficked twice or many times over. As reported by Al Jazeera, a trafficked bride in Haryana speaks so “I was driven in a truck, after that I was sold to a blind man. Then I was sold to someone else and someone else after that. I was constantly being given drugs. I said, “I don’t want to go any further.” He said, “let’s see how you don’t want to go.” He would put my legs over the fire.”. Girls are trafficked for a low cost of 5,000 rupees to comparatively higher of 40,000 rupees based on their physicalities like complexion, health, age and virginity. With cases of female genocide in Haryana, it has brought with it other evils of bride trafficking, kidnapping, female abuse and polyandry. In most cases, purchased brides become victims of unverified marriages. They ‘live a life on the fringe’ with no legal validity of the marriage.

Molki or Paro: An abusive word

The word “Paro” is well known today in regions like Haryana, Punjab, Western Uttar Pradesh and Rajasthan. It comes from degrading attitude of men towards women which means “woman who is purchased for a few bucks.”.  women “bought and brought” as purchased brides live in an appalling condition, suffer exploitation, both physical and mental. Despite the hatred these women feel towards being called Paros, the name-tag seems inseparable and reflects their doleful predicament which is a serious violation of woman’s most basic rights. The person from whom paro is being bought affords all the expenses throughout the way. The wide-scale social acceptance of sexual exploitation of women in the past for the satisfaction of men has transformed into the current practice of buying women “paro” or “molki”. Dr. Madhav Mohan Godbole, the director of Balgrah, a centre for rehabilitation in Rai, a village in Haryana said, “Villagers come to us and plead for brides. They say if we can’t fix them up, they will be forced to buy girls”.

Polyandry refers to the practice where one woman has more than one husband or male partners and it is not unusual in Haryana. Prof Rajesh Gill carried out the UGC-funded study in a district in Haryana and said “it was observed that due to poverty and lack of property or resources, men remained bachelors till late age, as none was prepared to marry their daughters to them. In order to cope with the situation, one of the brothers would marry and others would share his wife.” “Not a single case of domestic violence was found in households with wife sharing. Instead, women in these cases were founds to be extremely cheerful, satisfied and happy, unlike their counterparts in other households,” he added.  Prof Gill also authored ‘Gender Culture and Honour’, “The married brothers formed a group with unmarried ones and thus two brothers were sharing a wife each” says the book.

In 2006, the ugly denouncement of polyandry resulted in the murder of 18 years old tribal girl. She was sold as a bride in Haryana’s male-dominated family of a farmer. The skewed sex ratio is a common phenomenon even in India’s largest state, Rajasthan where polyandry is practised to safeguard their lands. they have no qualms in sharing their wives as long as their land safely remains undivided in the families.

A critical element of the campaign against Bride Trafficking is the development of national and local coalition who is helping to implement the campaign. The constitution of India prohibits all forms of trafficking under Article 23(1).  The march against bride trafficking 2018 was an initiative by Shafiqur Rahman Khan, the founder of empowering people and an everywoman working group member. The goal of the march was to explore ways government offices, NGO’s, youth groups and other stakeholders can work together to prevent bride trafficking. 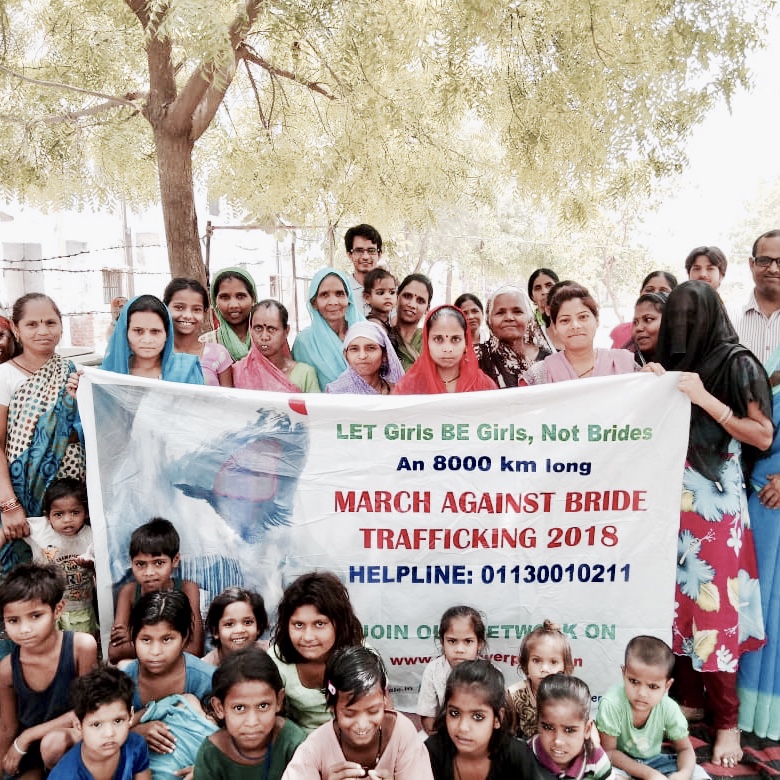 Sunil Jaglan, convener of Avivahit Purush Sanghatan, who has been running a campaign against female foeticide and bride trafficking says “Because of the gender imbalance, a number of men who are past the prime of their youth are still waiting for the prospective bride. So, their parents and villagers do not object to a matrimonial alliance with girls from other states and cultures. They sometimes even sell their lands to buy brides.”

Even after all the efforts, the irony still persists, and that is, on one hand, men are purchasing girls and on the other hand graph of dowry is touching the sky.

New National Education Policy Approved by the Cabinet: All You Need to Know