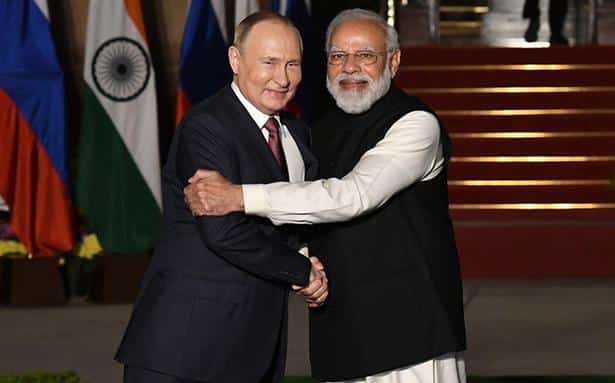 Mr. Putin and Mr. Modi will attend the 22nd meeting of the Council of Heads of State of the SCO in Samarkand on September 15-16

Mr. Putin and Mr. Modi will attend the 22nd meeting of the Council of Heads of State of the SCO in Samarkand on September 15-16

Russian President Vladimir Putin and Prime Minister Narendra Modi will meet on the sidelines of the SCO Summit in Uzbekistan this week and discuss issues of strategic stability, the situation in the Asia Pacific region and bilateral cooperation within the U.N. and G20, the Kremlin has announced.

Mr. Putin and Mr. Modi will attend the 22nd meeting of the Council of Heads of State of the Shanghai Cooperation Organisation (SCO) in the Uzbek city of Samarkand on September 15-16.

“A conversation on the international agenda with Mr. Modi will also take place, the sides will discuss issues of strategic stability, the situation in the Asia Pacific Region, and, of course, cooperation within major multilateral formats, such as the U.N., the G20 and the SCO,” the official Russian news agency TASS quoted Presidential Aide Yuri Ushakov as saying.

“This is particularly important, because India will preside in the U.N. Security Council in December, and, in 2023, India will lead the SCO and will also chair the G20,” Mr. Ushakov told reporters on Tuesday.

The Ministry of External Affairs has not yet confirmed the meeting between Mr. Modi and Mr. Putin.

The Prime Minister is likely to hold a few bilateral meetings on the sidelines of the SCO Summit, the MEA said on Sunday while announcing the visit of Prime Minister Modi.

On July 1, the two leaders spoke to each other and reviewed the implementation of the decisions taken during President Putin’s visit to India in December 2021.

Meanwhile, the trade turnover between Russia and India is growing. In the first six months of 2022, the figure reached $11.5 billion, adding about 120% year-on-year, the TASS report said.

“In the first half of 2022, the trade turnover reached an impressive level of $11.5 billion, adding almost 120% compared to the same period last year,” it said, citing an official statement.

The first in-person SCO summit since 2019 will be watched closely for the possibility of bilateral meetings on the sidelines with Chinese President Xi Jinping, Russian President Putin, and Pakistan Prime Minister Shehbaz Sharif among the leaders expected to attend.

No meeting planned with Pakistan counterpart

While there was no official word on whether Mr. Modi will have a meeting with Mr. Xi or Mr. Sharif, it will be after a long time that all these leaders will be at the same venue in person for a summit meeting.

Pakistan’s Dawn newspaper on Wednesday reported that Prime Mini­ster Sharif has no plans to meet his Indian counterpart Mr. Modi in Samarkand, but did not rule out a brief courtesy meeting.

A Pakistani official, when contacted by the newspaper, said though a brief courtesy meeting between the two was possible, they would not be holding talks, saying none of the two sides have sought a meeting.

This will be the first in-person summit after June 2019 when the SCO summit was held in Bishkek, Kyrgyzstan.

The 2020 Moscow summit was held virtually due to the COVID-19 pandemic while the 2021 summit at Dushanbe was conducted in a “hybrid mode”.