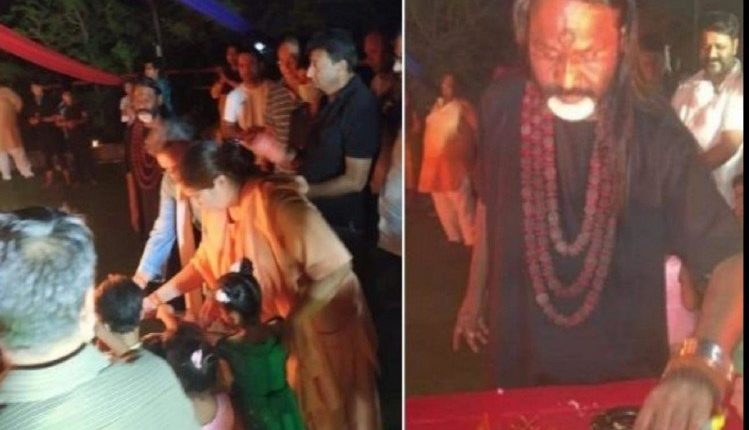 On Saturday, the Delhi Police has registered a case against self-styled godman Daati Maharaj and his disciples for violating the government guidelines on COVID-19 lockdown. They are alleged for holding a religious gathering at Shani Dhaam temple in South Delhi’s Asola on Friday at around 7:30 pm.

The next day, when the videos and photos of the religious ceremony at the temple went viral on social media, the District Magistrate and the Deputy Commissioner of Police of the South district solicited an inquiry into the matter. Atul Thakur, DCP (south) told, “Some photographs of a ceremony at Shani Dham mandir Asola were circulated on social media, wherein the social distancing norms were not being followed and a religious congregation was organized in breach of the lockdown guidelines,”.
He further added, “We have registered an FIR under sections 188 and 34 of IPC and under section 54 B of Department of Delhi Disaster Management Act and Section 3 of Epidemic Diseases Act against the organizers of the event. Arrests will be made after the inquiry is completed”.

The videos show people offering prayers, singing bhajans, and sitting close to each other, with most of them not even earing the masks. The Maharaj is seen cutting a cake and posing for photos. “We are verifying if all those photos are from the same event or not. We have taken all videos that were shot inside the temple while the event was on along with the photos clicked in the open where people are seen lighting mashals (torch) before the God’s idol,” said a police officer who didn’t wish to be named.

Daati Maharaj’s previous accusations-
Daati Maharaj is a controversial identity who has been accused of sexual assault by a former student of a school run by him on the temple premises.
In 2018, a disciple had accused Daati Maharaj of raping her at his ashram in Delhi. According to the complainant, she was raped in 2016 when she had gone to Daati Maharaj’s ashram, in South Delhi’s Fatehpur area, popularly known as Ashram Shri Shanti Tirth Kshetra.
In October 2018, Daati Maharaj was booked by the CBI in the rape case.
He was charge-sheeted in the case. Maharaj is currently out on bail.

Ban on Zoom: Supreme Court asks Central to respond to the Petition