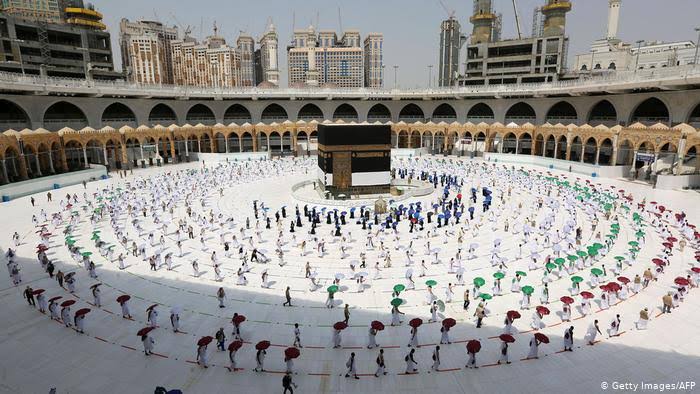 Saudi authorities are all set to revive Umrah in four stages

After Haj, Umrah is one such activity which is performed by Muslims religiously. Umrah is a year-round pilgrimage to the holy city of Mecca.

The Saudi Arabian authorities resumed on late Saturday the Umrah pilgrimage to the holy city of Mecca, the kingdom’s Ministry of Hajj and Umrah said. The religious activity Umrah will soon be fully revived in batches by the Saudi government.

The holy city of Mecca has now opened for the pilgrims to perform Umrah. It attracts millions of Muslims around the world every year. After Haj, Umrah is one such activity which is performed by Muslims religiously. Umrah is a year-round pilgrimage to the holy city of Mecca.

It is a voluntary pilgrimage, unlike haj, which is compulsory for every Muslim who is physically capable and can afford it.
Umrah is a shorter version of the annual haj pilgrimage which allows Muslims to seek refuge in Allah, ask for mercy and pray for their needs.

Over 108,000 foreign and local pilgrims, who are in the country, have now received permission to take part in Umrah.

Top 10 Deadly Yet Adventurous Railway Routes Across The…

The resumption of the Umrah pilgrimage will take place in four stages. During the first stage, it will resume from October 4 only by 30 per cent; the second stage will begin on October 18 with a 75 per cent participation of willing pilgrims. And from November 1, Umrah will gradually begin to accept the participation of all interested pilgrims from within the country and from abroad. One hundred per cent conducting of Umrah, as it was before, depends on when the end of the pandemic is announced or when the danger disappears,” the ministry told the Saudi Press Agency.

Though the revered Black Stone in the eastern corner of the Kaaba — which it is customary but not mandatory to touch during the pilgrimage — will be out of reach. At the same time, the Grand Mosque will be sterilised before and after each group of worshippers.

A health worker will accompany each group of 20 or 25 pilgrims, and medical teams will be on the ground in case of an emergency, Benten said.
The hajj went ahead successfully in late July, on the smallest scale in modern history, with only up to 10,000 Muslims allowed to take part.

KSA also said that Umrah would be allowed to return to full capacity once the threat of the pandemic has abated. Protective measures, such as disinfection and social distancing, will be taken during the pilgrimage.

Suspending Umrah for seven months was a necessary precaution. Still, the fact that it has now resumed, even with limited capacity, brings cheer to worshippers during challenging times.

UP Govt to establish Women Help Desk in each Police Station…