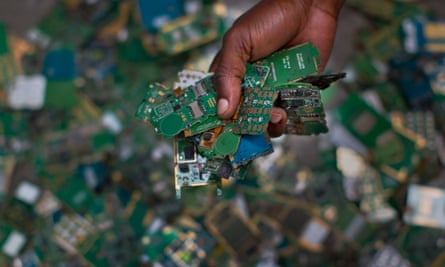 The UN led report cites China, America and India for 38% of the global E-wastes generation and the lockdown has aggravated the situation.

Global E-waste Monitor formed by UN University called the world’s production, consumption, and disposal of E-waste as “unsustainable” in its recent report. 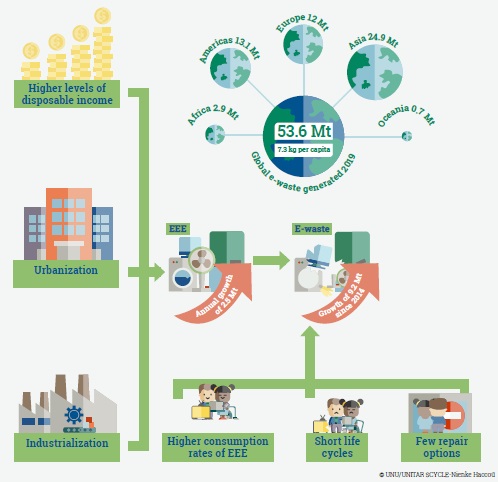 The Global E-waste Monitor 2020 report found that the world dumped 53.6 million tonnes of E-waste last year. Out of which only 17.4% was recycled. E-waste consists of all products that have any batteries or electrical cords. It means gold, platinum, and other high-value recoverable critical raw materials (cobalt, palladium, indium, germanium, bismuth, and antimony), worth US $57 billion were dumped or burned in E-waste last year.

China, with 10.1 million tonnes, was the biggest contributor of E-waste, and the United States was second with 6.9 million tonnes. India, with 3.2 million tonnes, stood at third. Together these three countries accounted for nearly 38% of the world’s E-waste last year.

While the overall damage done to the environment from all the un-recycled waste may be incalculable, the message from the report was conclusive: “The way in which we produce, consume, and dispose of E-waste is unsustainable.”

Global warming is just one issue cited by the report, as it also noted that 98 million tonnes of carbon dioxide equivalents were released into the atmosphere as a result of inadequate recycling of “undocumented” refrigerators and air conditioners.

The number of countries has adopted a national E-waste policy, legislation or regulation has increased from 61 to 78 including India, which is the only country in Southeast Asia to have adopted the E-waste policies but the collection of E-waste is still rudimentary.

It is far from the target set by the International Telecommunication Union to raise the percentage of countries with E-waste legislation to 50 percent.

The reason behind the unsustainable management of E-waste is the difficulty in the process of extraction of valuable minerals and the extremely toxic by-products that are left after the extraction. Researchers have found  Chinese city Guiyu, in Guangdong Province, perceived as the largest E-waste site in the world to be the most carcinogenic place on the planet.

With the increase in technological innovation, the E-waste crisis is likely to escalate. Even Technological Companies, in bid to increase profits are developing new products while intentionally making the earlier products obsolete. So, now it has become necessary for the sustainability of this planet to hold the companies accountable for the disposal of E-wastes.