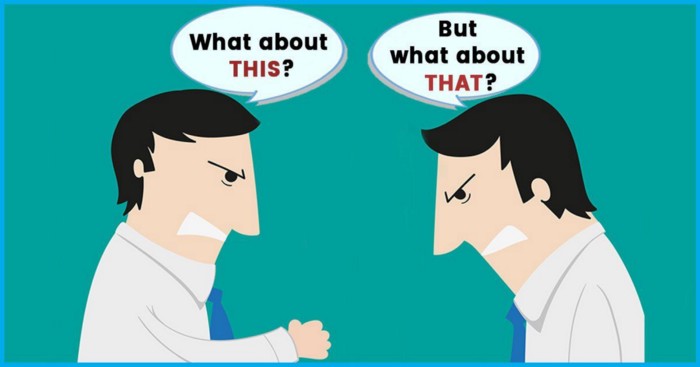 Whataboutism- The latest tool of Digression and Invasion of Discourse.

“But What About….?” often a notification of comments under your recent post has these words. Let’s divulge in this variant of the ‘tu quoque’ logical fallacy.

In contemporary times, the aftermath of any tragedy is followed by a plethora of condolence messages by a set of people, general and famous, one that is soon derided and then counterposed by another set of people for its ostensible hypocrisy, ignorance or some other pejorative context. As seen in the recent global outrage over the custodial death of African- American George Floyd in the US and the hashtag activism of ‘BlackLivesMatter’ which was soon replaced to ‘AllLivesMatter’ which isn’t wrong in any sense but generalizes, derides and diminishes the struggles of the African- American community globally and inadvertently glosses over the larger undertones of racism. People who construct such references indulge in the act of Whataboutery or Whataboutism which is a logical fallacy- just a faulty reasoning technique that causes chaos rather than building an argument.

Cambridge Dictionary defines it as: the practice of answering a criticism or difficult question by attacking someone with a similar criticism or question directed at them, typically starting with the words “What about?”

An Instagram post on the plight of Kashmiris about the frequent internet suspensions after the August 5th Lockdown last year, you’ll certainly encounter comments asking your views on the deplorable conditions of the Kashmiri Pandits after their mass exodus from the valley in the early 90s. There are 70% chances you were not even born at the time or you were too young to raise your concerns against the tragic event, this isn’t about raising concerns over the humanitarian crisis and imparting information on it rather it is just about auto-referencing another incidence of the same construct and an of similar circumstances, albeit, supposedly ignored throughout history by the other side.

According to Google, the term whataboutism dates back to 1978 when it applied to propaganda techniques used by the Soviet Union during the Cold War. When criticisms were levelled at the Soviet Union during the Cold War, the Soviet response would often be “What about …” followed by an event in the Western world. According to Russian writer and political activist Garry Kasparov, it is a word that was coined to describe the frequent use of a rhetorical diversion by Soviet apologists and dictators, who would counter charges of their oppression, “massacres, gulags, and forced deportations” by invoking American slavery, racism, lynchings, etc.

Kargil Vijay Diwas: A Homage to the Historic Day of 1999

And since then, Whataboutism has been used by several politicians and leaders of other countries as well like Azerbaijan in its abuse of human rights, by Israel on talks about the Israeli Occupation of Palestine and closer at home, it has been a rhetorical device of the political lexicon after the Indian Writers Protest over intolerance row with the GOI in 2015 often termed as the ‘Award Wapsi Gang.’ Though the politicians are often accused of using these rhetorical questions of ‘What about?’ to evade the rational perspective and logical questioning and simultaneously shift the blame of their shortfalls to their own opponents forcing them to assume moral responsibility for their past sins. But this narrative is not only used for political agendas but the recent upheaval in the Online protests and social media activism is seeing the tenor of whataboutery is cuttingly sharp and usually offensive. The phraseology is not meant to enlighten others of similar incidents that genuinely merit equal or more empathy and support. Instead, it is meant to shame the others into publicly highlighting the limitations of their beliefs, priorities, and concerns.

The same pattern ensues many topics doing the rounds on various social media platforms as seen in the case of ‘NotAllMen’ or when one posts about the growing episodes of sexual violence on women, there are certain  “What about the men who get sexually assaulted?” interrogation that follows. As a sane human and a feminist, one obviously cares about the men facing sexual assaults. But, the other person’s ‘what-about’ is an invitation to argue about men’s inclusion, rather than what you were really talking about — the massive number of women who suffer sexual assault. Which is just a diversionary tactic from important discourse way more often than they do to raise awareness.

Although this a bit hard to identify and differentiate between the upfront genuine concern of the responder and other deceptively veiled counterarguments completely irrelevant to the conversation at hand. This incredulous approach often undermines the legality of the original and valid conversations regarding sexual assaults on both genders alike and thus, dispenses away from an important and vitally paramount societal discourse. And these are just a few of the examples which take away the credulity of the necessary dialogue on issues pertaining to society.

Often, a person engaged in whataboutery might raise a valid argument for inclusion or poke holes in a non-inclusive argument. But, when someone or more often than not, ‘internet trolls’ deliberately choose an out-of-context and hostile counterfeit, it disrupts the discourse into chaos rather than furthering it.