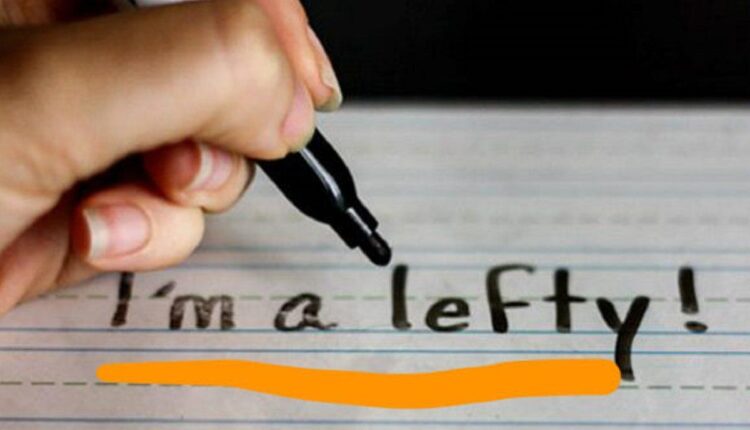 In 1976, the first International Left-Handers Day was observed for the first time. It continues to be observed annually on 13 August.

Winfrey, Sachin Tendulkar, Rafale Nadal and Amitabh Bachchan. What is common in these people? They are famous and best in their field but what else.  They are all left-handers as well.
In India, left-handedness is still often considered a bad omen. People who are left-handed are often not welcome to perform puja ceremonies, and a lefty is often referred to as someone who uses the ‘wrong hand’— Ulta (opposite) as opposed to seedha (straight and right). And if you eat with the left hand, your parents and society will look at you like you have committed some crime.
As per the research conducted by the American Psychological Association  10 per cent of the people in the world are left-handed, and that’s not a small number.

However, despite this, lefties often struggle to perform basic daily tasks in a world designed for right-handers, and until not so long ago, faced widespread social stigma too.
Back in 1976, the first International Left-Handers Day was observed for the first time. It continues to be observed annually on 13 August. On this day let’s talk about the struggle’s lefties face in day-to-day life:

Writing on a desk that really only works for righties, and the amount of time you spend adjusting and trying to find the perfect angle is war itself. Remember how you manage with poor handwriting towards the end of an exam just because you had to spend 10 minutes figuring out a perfect position to write? Plus, the act of writing left to right is itself messy for a left-hander, because your hand or the sheet of paper is bound to get smudged with ink. We’ll kick off our list of problems for left-handed people with this pain. University is hard enough without having to find an appropriate desk.

Scissors, tweezers, bottle openers — most kitchen equipment and even basic household tools are designed keeping right-handed people in mind. It is difficult to find a pair of scissors that works for lefties, and doesn’t hurt their fingers. When Hindustan Pencils (the stationery brand that manufacturers Natraj and Apsara pencils) especially made leftie sharpeners after a four-year-old girl wrote to the company, it was a major breakthrough, but it remains the exception.
Scissors are amazing if you’re right-handed, but for lefties, these are literally torture devices. But even for right-handed people, prolonged cutting sessions are equally torturous.

3. Measuring tapes tend to be upside down

Why is this even a thing? Who in their right mind designs, makes and sells upside down measuring tapes? Measuring cups, tapes, rulers — all favour the rightiesExamine a measuring cup or tape, a ruler or even a lab beaker, and you will see that the numbers are written in a way that makes them much easier for people using their right hand to see.

You could learn to write in reverse, but why should you? Unless you use some super-duper instantaneously drying ink or ultra-resistant pencil, you’re going to end up with a dirty hypothenar.

The ticket barriers at metro stations typically have the scanner on the right side. Therefore, a leftie, who might instinctively put their metro card or the coin towards the left, will simply open the gate for someone else.

Look, how are we supposed to release our creative sides if the power that be decided to only create instruments for the right-handed in mind?

Yeah, say no more. Sure, I’ll just reach over the entire keyboard to type in some numbers. What’s that? Learn to do it with my right? I hate you.

As if they didn’t have it easy enough with crosswords, scissors, and desks, you have to share desks with them. Beware, elbow combat is an inevitability. Let battle commence. Elbow wars and being pushed to the far left. Lefties always have to be conscious about which side they want to sit. Dining out with a group of friends, they have to make sure that their elbows do not clash with someone else who is eating with their right hand, for which they prefer a seat in the far corner.

Whether it be exchanging money, shaking hands, you name it. This is a damned mine-field. They  are also the constant demands for your experience of doing this or that. I’m left-handed not an alien dude.

Let it be Badminton or Tennis or any other outdoor game left-handed people always feel left out. Since they don’t have the proper equipment to use their hands with and of course they face a lot a difficulty to train with such equipment and hurt themselves many times.

Researchers who study human hand preference agree that the side of the preferred hand (right versus left) is produced by biological and, most likely, genetic causes. The two most widely published genetic theories of human hand preference argue that evolutionary natural selection produced a majority of individuals with speech and language control in the left hemisphere of the brain. Because the left hemisphere also controls the movements of the right hand–and notably the movements needed to produce written language–millennia of evolutionary development resulted in a population of humans that is biased genetically toward individuals with left hemisphere speech/language and right-hand preference.

Right-handed people are not superior or inferior to left-handed and vice versa. But the needs of both people are different and everyone and the system should provide them the resource as per their need i.e. writing desk for left-handers or different stationaries for them. The society should also understand that its just science which makes one-hand dominant than the other and both the hands are equally important for human. Nothing makes left-handedness a bad omen or bad luck.

From Poetry to Politics: In Conversation with Hussain Haidry On His Journey

The muddled case of UP’s Akhlaq Salmani attacked in…