by Sarim Mustafa Khan
in People, News
Reading Time: 3 mins read
A A 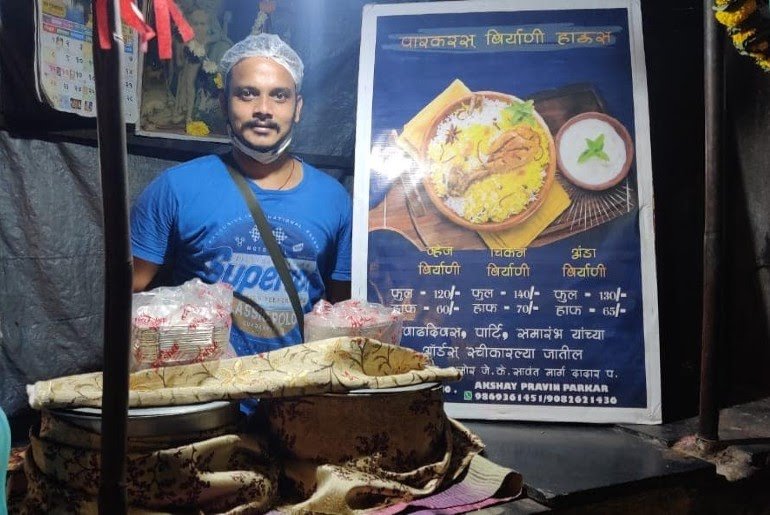 COVID-19 Pandemic has affected our lives in more than one way. Along with the health risks, the subsequent lockdown in almost every part of the world had left many people in a psychological, economical, and professional dilemma.
Lockdowns went on to shut-down many of the industries to almost zero activity which led to massive termination of employees by the companies leaving thousands jobless.

But ‘where there is a will, there is the way’. Akshay Parkar, who was formerly working at Taj Group of Hotels & International cruises as a chef, found himself with no job during the pandemic.

With a skill set of making great taste out of the foods, Akshay decided to put his skills to make the most of the situation. He installed a stall on the road-side of Mumbai where he sells Biryani now. And what else anyone will want to eat other than a plate of Biryani from a 5-star chef.

Akshay, who is 29 years old, being the only sole earner of his family said, “My Parents have been ill for a while now. My mother has undergone two operations for a fractured knee and an elbow injury. My father lost his job after the flour mills closed down and he has been recuperating from tuberculosis for years.”
Talking about his parent’s medical conditions, he said “I earned $1000 a month. But all my savings were spent on my parent’s medical treatment. With their advanced age and prior health conditions, my parents were not eligible for a medical insurance policy, making the treatment more expensive.”

With no choice left but his cooking skills, he realized he needs to do something to earn money for taking better care of his parents. He went on to set up his Biryani stall. He said, “A Vada Pav snack vendor from my neighborhood went out of business and was willing to hand over his business space to me. I decided to cook Biryani at home and sell it during the evenings on the street.”

The most unique of all vendors, Akshay’s Biryani has the essence of recipes from the kitchen of 5-Star hotels. He put his years of learning as a chef to make this biryani worth craving for. The 5-Star Biryani accessible on your nearest street with a minimum of a high-end restaurant tax fuss is something to go for without a second thought.

Akshay said, “The customers are higher during the weekends, and I am starting to make up small profits. My biryani’s selling point is that I cook from the recipes I have learned for years at 5-Star hotels working alongside International chefs. The quality is the same as of 5-Star hotels despite being sold on the roads.”

Starting the Biryani stall, he suffered a slow start, after getting help from his friends in spreading the word around, people showed up for the taste of biryani. Akshay is happy with his own business and looking forward to making more out of it by expanding the business instead of going back to the kitchens on the seas again.

At last, he added, “I have decided to continue growing the business here rather than going back to my glorious job. My parents also need me, considering their medical conditions, I can not take the risk of returning to the seas.”
We wish him success in his intentions to do good for him and his parents. Hope he grows more with his business.

You can visit his stall for a great taste of biryani, his stall is located around the Star Mall area of Dadar, Mumbai. If you’re nearby, don’t let yourself away from tasting the 5-Star Biryani from a 5-Star chef Akshay.

For more such stories explore our Inspiring Section