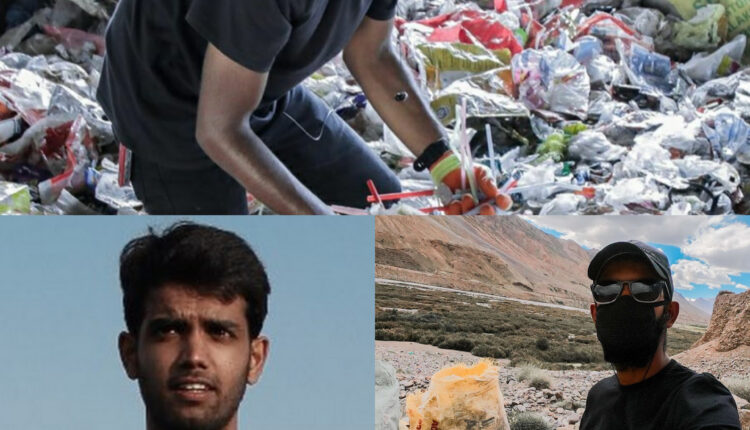 Aakash Ranison is a vegan, lives a minimalist lifestyle, is a climate activist, and strives for sustainability for a promising future. He travels around the world, documents and advocates stories of change.

Aakash Mishra, who goes by the name Aakash Ranison, is an Indore based travel blogger, climate activist and a social media influencer, who has added a new meaning ‘that’s sustainability’, to the concept of wanderlust. The 26-year-old minimalist has adopted a vegan lifestyle, being a part of the change, he encourages sustainability.

Nagaland Man Converts His Car into An Ambulance, Helps many…

Not the corporate luxury, an Engineering Student With UPSC…

Ranison, a young change maker, travels around the world, and educate people on how to conserve the environment, for a better future. His signature reads, “travelpreneur”, which indeed suits him well as he keeps wandering around the globe. He has cycled over 18,000 km and hitchhiked 48,000 km, visiting over 80 cities between India and Bhutan, since he first began his journey in 2013.

My blog has been taken over by PET, no PET isn’t my friend. But he’s been after me for real long to let him express his emotion and now when he got to know I’ve started a project against him so got on my head and I had to pet him do it. • Please had to my blog and read “letter from PET AKA Single-Use Plastic Bottle and if you like do share with people. • Creative by: @satejmulick 🌻 • To learn more and connect please visit #sustainably website “aakashransion.com/sustainably” [link-in-bio] • @unitednations @uninindia @unep @unclimatechange @unyouthenvoy @undp @theglobalgoals @globalgoalscast @gatesfoundation @sdsnyouth @antonioguterres @theclimategroup @climatereality @unvolunteers @nasaclimatechange

Coming from a lower-middle-class family, Aakash had a terrible childhood, financial crisis, domestic abuse, unhealthy relationships came to be the major problems of his life. However, these struggles taught him exceptional life skills to survive in the bare minimum.

Rewinding his school days, Ranison says,” I was not good at studies. It was difficult for me to cram notes and sit for an examination that I could not understand the relevance of it in my life. If I knew the significance of a lesson, I can put my heart and soul into the learning but, if I cannot, it’s a downward spiral journey. What’s interesting was, at this point. I had taken the steering wheel in my own hands, and if there was an accident, I was aware of it.”

At the age of 15, he developed his interest in computer courses, but because of lack of financial aid, he couldn’t pursue it. So the absence of opportunities drew his attention to opening an NGO,” The Golden Bird Foundation”, for the unprivileged students.

“I was in Class 12 when I started this NGO. Practically, I was just a kid out of school, but managing that organization taught me crucial life skills. I knew I was working to build a community, and that helped me connect with people. Marathons, flash mobs and cyclothon, were organized. Suddenly, with just a backpack, I was out in the real world, setting up meetings with big corporates to talk them on sponsoring the activities”, recall Aakash.

“In 2014, during one of those cyclothon events, I got my first cycle, and life was never the same. It became one of the most prized possessions which intrigued me into travelling and opened the doors for crossing boundaries. I have cycled through Kashmir to Kanyakumari,” stated Aakash.

With almost no formal education, Aakash took all his inspirations from great leaders like Swami Vivekananda and Bhagat Singh. In conversation, while talking about his real-life mentors he says Mahatma Gandhi was a significant influence on his life. He observed that Gandhi took to walking as a sign of protest which was indeed very influential.
Ranison says, “Walking was not for the faint-hearted, and that’s when I started walking. I walked and covered the distance from New Delhi to Nepal in 101 days. I was experimenting with different modes of travelling, which included hitchhiking.”

Aakash acknowledges that every day had been a new lesson for him and a reason to believe in himself a little more. Recalling his experiences, he says, “I was travelling to places and looking at the transforming urban ecosystem. The locals would tell me stories about the before and after. I witnessed a massive amount of plastic pollution, the green cover replaced by cemented infrastructure and people’s indifference towards it and it was worrisome! During my journey, I started researching about it. I read a lot, watched documentaries, had a dialogue with people about environment degradation and came across the term ‘climate change’. Delved deeper only to find out that plastic was just the tip of the iceberg.”

According to Ranison, “After adopting an eco-friendly lifestyle, by cutting down the usage of plastic, zero flights to zero waste lifestyle. Aakash has brought a significant change in his life as he says, “After I have made significant changes in my life, I started communicating about it. TED talks, Google Talk happened. I started working on my social media platforms to educate people about climate change, sustainability and responsible travelling. I was putting up photographs and video content from the travelling days and writing about the experiences. People found it different from other travel influencers; they were interested in my storytelling. I think this distinction helped me collaborate with brands.”

“Climate change is not a complicated concept. It is not the deterioration of the ecosystem or deforestation. It is a change in the atmospheric conditions where humans cannot survive. It is impossible to survive in the Moon or the Sun. The only planet that supports human existence is the Earth, and our activities are jeopardizing our existence on this planet”, says Ranison.

Aakash, concentrating on climate change, talks about, finite mindset a term introduced by Simon Senek, where people ignore their responsibility towards the environment.
“The infinite mindset always thinks about the perpetual consequences of the actions. Something that is definitely going to stay beyond his existence. If I simply toss a cold drink can on the road without thinking about all the possible damages it is going to cause to the ecosystem, this finite mindset is going to make us lose all the important battles, and this needs to change,” he concluded.

Aakash truly epitomizes what JRR Tolkein said, “Not all who wander are lost.”

Anurag Kashyap denies rape allegations, claims to be in Srilanka in 2013