by Mantasha Naseem
in News
Reading Time: 2 mins read
A A 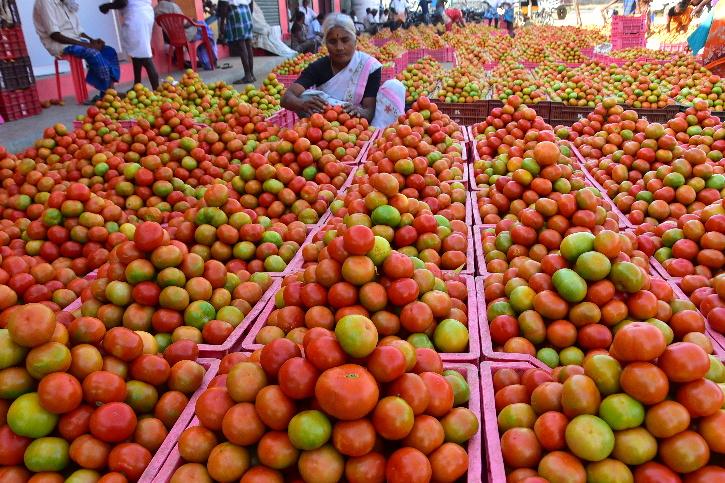 The average selling price of tomatoes in cities like Delhi and Mumbai is anywhere between Rs 20-30. But those farmers who generate them are not even receiving a fraction of that amount.

In fact, the prices at which the tomato farmers in Kurnool, Andhra Pradesh are compelled to sell their crop is beyond alarming. According to local media reports, on Thursday the Pathikonda agriculture market committee (APMC) market was purchasing tomatoes from the growers at as low as 10 paise per kg.

Farmers of Pathikonda, Alur, Aspari and some other areas cultivated a fair variety of tomatoes in a large extent and the recent rains due to hurricanes have further led to a bumper crop. With the price fall, it has now led to a disaster.

This, according to the farmers was the lowest price this season for the kitchen staple. Tomato prices have been on a free fall for nearly two weeks now since the farmers across Kurnool are planting their bumper crop.

The despicable farmers have queried the system and said in such a circumstance how can a farmer survive and feed his family.

But with such low prices, the farmers say they won’t make any revenue from the harvest and can’t even regain the investment they made. They say that the 10 paise per kg won’t even cover their harvest and transportation costs.

The farmers are now stressing a Minimum Support Price for their crop and mandated that they should get at least Rs 10 per kg, to make some profit and pay back their loans.

According to farmers tomatoes are cultivated in around 4,000 hectares of land in Kurnool and on average they spent around Rs 8,400 per acre every season, comprising labour cost and transportation.

The APMC said that on Thursday around 150 tonnes of tomatoes had entered the market, which concluded in the price crash. The development comes at a time when the role of middle-men and APMCs are coming under improved scrutiny, following the enactment of the three farm bills.

Though several crops like wheat, sugar cane, cereals, pulses and oilseeds are wrapped under MSP, vegetables are not.

Last month, Kerala had evolved to be the first Indian state to enforce MSP for vegetables.

1. Farmers Protest, The Tip Of The Iceberg