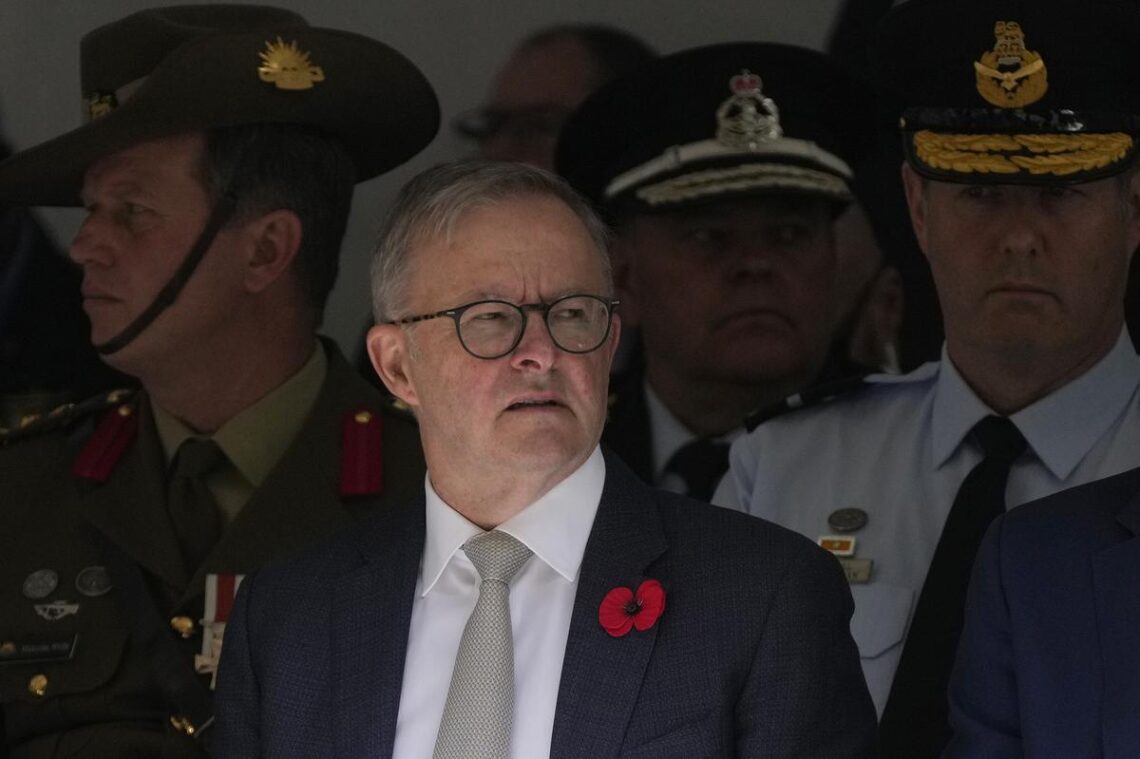 Both leaders will attend a Group of 20 meeting in Indonesia and then an Asia-Pacific Economic Cooperation forum meeting in Thailand next week.

Both leaders will attend a Group of 20 meeting in Indonesia and then an Asia-Pacific Economic Cooperation forum meeting in Thailand next week.

Australian Prime Minister Anthony Albanese said, on November 11, he would ask Chinese President Xi Jinping to lift billions of dollars in trade barriers in the event that the two leaders hold their first bilateral meeting.

Both leaders will attend a Group of 20 meeting in Indonesia and then an Asia-Pacific Economic Cooperation (APEC) forum meeting in Thailand next week.

Mr. Albanese was speaking in Sydney before departing Australia on Friday for an East Asia Summit in Cambodia, which Xi is not expected to attend.

A face-to-face meeting between the Chinese and Australian leaders would mark a major reset in a bilateral relationship that plumbed new depths under the nine-year rule of Australia’s previous conservative government.

Beijing had banned Minister-to-Minister contacts and imposed a series of official- and unofficial trade barriers on products including wine, coal, beef, seafood and barley in recent years that cost Australian exporters 20 billion Australian dollars ($13 billion) a year. Mr. Albanese said a meeting with Xi was “not locked in at this point in time.”

“We obviously will be attending the same conferences, or at least two of them (G20 and APEC) over the next nine days. And I would welcome a meeting if it occurs over that time,” Mr. Albanese said.

“Australia has world class products — in seafood, in meat, in wine, in other products that we export to China. It’s in China’s interest to receive those products, it’s in Australia’s interest to export them. So I’m very hopeful — we’ll continue to put our case that these sanctions are not justified, that they need to be removed,” Mr. Albanese added.

Asked what China wanted from Australia to improve relations, Mr. Albanese replied: “It’s not up to me to put forward their case.” “What I want to see with the relationship with China is cooperation where we … maintain our Australian values where we must,” Mr. Albanese said.

Bilateral relations soured over issues including Australian demands for an independent inquiry into the COVID-19 pandemic, a ban on Chinese telecommunications giant Huawei’s involvement in the Australian 5G networks on security grounds and recent laws that ban covert foreign interference in domestic politics.

China’s Ambassador to Australia Xiao Qian said in August that Beijing would discuss with Australia whether conditions were right in November for Mr. Albanese to meet Xi during the G20 summit.

The White House has confirmed President Joe Biden will hold talks with Xi on Monday on the sidelines of the G20 summit in Indonesia, their first face-to-face meeting since Mr. Biden became President in January 2021.

The meeting would come as competition for influence among South Pacific island nations heightens between China and the United States, with its allies including Australia, since Beijing struck a security pact with the Solomon Islands early this year that has raised fears of a Chinese naval base being established in the region.

Explained | Why has the China-Solomon Islands deal become the latest flashpoint between China and the U.S.?

Mr. Albanese said Australia has “strategic competition in the region” with China. “China, of course, has changed its position. And it is much more forward-leaning than it was in the past,” Mr. Albanese said.

10 Most Luxurious Places To Explore In England