The dialogue in The Dark Knight trilogy is one of the most amazing aspects. Jim Gordon of the GCPD is a big part of the discourse. Here we going to have a look at some of the best sayings of Commissioner Gordon from the dark knight trilogy. 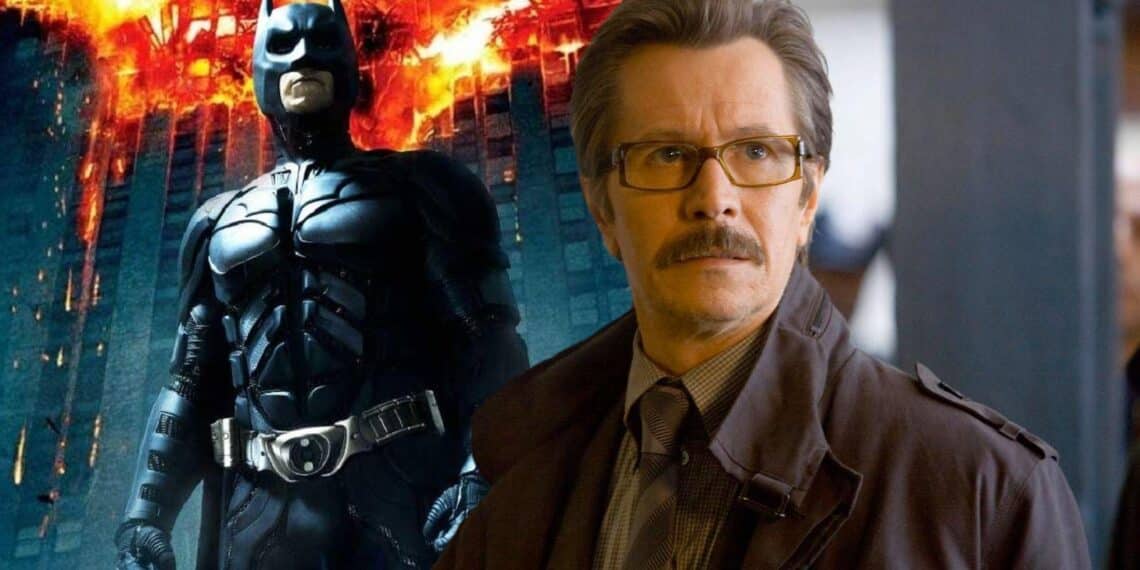 Jeffrey Wright has had a good run in recent months. The actor has gained praise for his portrayals of James Bond’s CIA partner Felix Leiter in No Time To Die and Batman’s GCPD ally Jim Gordon in The Batman. Is he, though, the strongest Gordon? Between him and Gary Oldman, it’s a close race. Let’s have a look at some of the best sayings of Commissioner Gordan from the Dark Knight Trilogy.

In The Dark Knight trilogy, Oldman portrays the DC role, albeit his version is a little more seasoned in the Gotham police enforcement milieu. Gordon is appealing in the Nolan films not just because he is performed by a wonderful actor, but also because he is a moral guy. He also has some excellent quotes.

1. When He Sees The Batmobile For The First Time

After Gordon and Batman rescue Rachel from Arkham Asylum, a police officer advises them to grab a car so they may take her to the hospital right away. Batman, on the other hand, has a superior idea: the Batmobile.

For a multitude of reasons, Bale’s Batman’s Batmobile is one of the finest Batmobiles. It’s not only a terrific automobile in terms of utility, but it’s also beautiful to look at. Gordon is as awestruck as Bruce was the first time Lucius Fox showed it to him. His statements are a joke since he isn’t usually impressed by electronics or military-style vehicles.

2. When He Defends The Dent Act

“The Rules Aren’t Weapons Anymore, They’re Shackles Letting The Bad Guy Get Ahead.”

When Officer Blake hears about the Dent Act, which forbids inmates from receiving parole, he is disgusted. Blake believes it is poor legislation, but Gordon believes it is vital in a city where so many criminals refuse to rehabilitate.

Blake is still young, therefore he hasn’t really grasped the gravity of the situation in Gotham. He believes that by following the conventional legal system, Gotham’s criminals can be dealt with. Gordon, on the other hand, has spent enough time in Gotham to know that the bad guys don’t play by the rules. As a result, the legislation should be stricter than in other countries.

3. When He Explains To Gordon Jr. Why Batman Is Fleeing

“Because We Have To Chase Him. Because He’s The Hero Gotham Deserves, But Not The One It Needs Right Now.”

After beating the Joker, Batman is on the run once more, which Gordon Jr. finds surprising. He inquires of his father as to why the Dark Knight is fleeing despite the fact that he is a hero and the lawman answers.

The reality remains that Batman is a vigilante, even after saving the city. Because taking over the police’s duties isn’t precisely lawful, he can’t wander around freely. Gordon, on the other hand, is someone who actually understands him. While other police enjoy chasing him around, Gordon is content with the knowledge that he will never be caught.

4. When He Sees Harvey Dent On TV

“Our Boy Looks Good On The Tube.”

When Gordon hears Harvey Dent on TV talking about his jail reforms, he is pleased. He says to everyone in his immediate vicinity that the man looks great in front of the camera.

Harvey Dent is revealed to be a highly capable DA before becoming one of the deadliest villains in The Dark Knight trilogy. He becomes one of Gordon’s favorite lawmen as a result of his instructive pieces of legislation. Unfortunately for Harvey, he doesn’t get to keep his nice looks for long, as he quickly transforms into Two-Face.

5. When He Promises Flass To Not Tell Anyone About The Bribe He Accepted

“In A Town This Bent, Who’s There To Rat To Anyway?”

Flass, the corrupt GCPD officer, informs Gordon that other officers (including himself) are concerned that he may denounce them after receiving a bribe. Gordon warns Flass that because everyone is corrupt, there is no one to report them to.

In all of the Batman media, Gotham is depicted as having the world’s most corrupt police force. Fortunately, there is always a jewel in every wasteland, and Jim Gordon is one of them. He has no qualms about having unclean relationships. What matters most to him is that he has the opportunity to make a difference by always doing the right thing.

6. When Bruce Asks Him If He Should Go To The Hospital After Saving Reese

When Bruce saves Reece by stopping an oncoming truck with his automobile, Gordon is impressed. Gordon is astonished when Bruce asks whether he should get treatment since he anticipated the millionaire to have heard about the Joker blowing up the hospital.

Bruce Wayne, a millionaire, is expected to keep up with the news since he may be the subject of it. However, leading a double life leaves him with insufficient time to keep up with what’s going on in the city. One of the worst things the Joker has done is blow up a hospital, and in this case, Bruce is completely unaware of what has happened.

7. When He Blames Batman For The Mayhem

“We Were In This Together, And Then You Were Gone.”

When Batman pays him a visit to the hospital after Bane’s attacks, Gordon doesn’t have good words for him. He claims they were collaborating, but then Batman abruptly vanished without warning.

Bruce Wayne puts the city in peril by opting to retire after fighting the Joker. Stronger villains arise, like Bane, and things become so chaotic that even Gordon is sent to the hospital. Gordon is also correct in his assessment of him and Batman as a powerful pair prior to the Caped Crusader’s decision to go his own path. They had fought Ra’s al Ghul and the Joker with each other’s support.

8. When His Daughter Asks If Batman Saved Him

“Actually, This Time I Saved Him.”

Gordon returns home after battling with the Joker and is seen putting his daughter to sleep. She wonders whether Batman saved him, but he corrects her, adding that this time it was him who saved Batman.

Gordon might portray himself as a cool dad by informing his daughter that he aided Batman, but he’s not simply bragging. He sincerely cares for the hero’s well-being and will go to any length to ensure that no one hinders him or does him damage. As a result, he’s been known as Batman’s unofficial sidekick.

“I Never Said Thanked You.”

When three of Gotham’s most legendary villains are vanquished, Gordon is overjoyed. At the end of the film, he praises Batman, but the Dark Knight responds even better: “You’ll never have to.”

Gordon is compelled to thank Batman because, despite the fact that he is not a police officer, he chooses to assist in the arrest of the city’s criminals. No one is paying him, so he may just turn a blind eye to whatever is going on, just like any other citizen. Batman, on the other hand, does not see his deeds as a favor. He believes that rescuing Gotham is a task that must be completed.

10. When He Urges Batman To Unmask Himself

“Shouldn’t The People Know The Hero Who Saved Them?”

Before Batman uses the Batwing to fly the bomb out of town, Gordon advises that the locals should at least know who rescued them. Before unmasking himself, Batman argues that a hero may be anyone.

Batman isn’t interested in the accolades, but because he’s been working with Gordon for so long, he believes it’s about time he found out who he really is. It’s the ideal present for a buddy. And, based on Gordon’s reaction, Bruce Wayne is the last person he expects to be jumping off the city’s tallest buildings.

It’s been over a decade since Christopher Nolan’s highly praised and generally appreciated Dark Knight trilogy came to a conclusion, and despite the abundance of superhero films that have followed, they remain three of the greatest.

There is so much fantastic writing in all three films that narrowing down the finest Dark Knight quotations to merely twenty is challenging. Here are some of the best sayings of Commissioner Gordon from the dark knight.