While the farmers are fighting for their demands in streets, some celebrities are courageously doing their part in support far away from the protest sites.

by Sami Majid
in Entertainment, Infotainment, Listicles
Reading Time: 6 mins read
A A 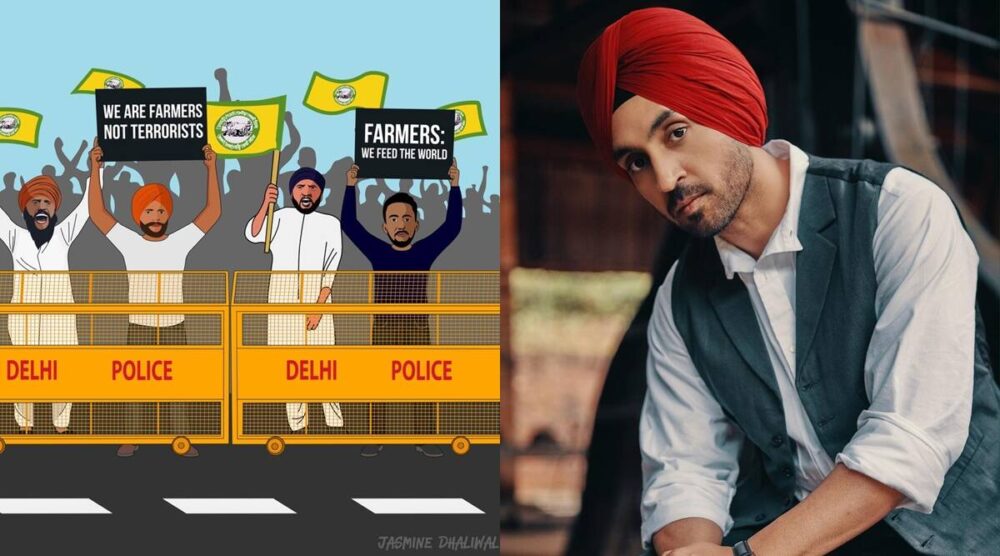 For the past few days, farmers from the states of Punjab, Haryana and Uttar Pradesh are on the streets in protest against the three draconian farm bills introduced by the Central Government. As a result of which the farmers’ livelihood now tends to depend only on big private companies.

While this ‘Dilli Chalo’ protest-cum-procession by various farmers’ organisations is on, there has been a spate of visuals doing the rounds on social media in which it is clearly observed that what hardships farmers have been facing to enter the national capital just to make their demands met. In this chilly onset of winter, water cannons are being rained on the farmers, tear gas has been lodged, along with the police brutality.

But the farmers aren’t budging at all and supporting them in various forms are the commonmen of our country. Not just them, but some celebrities too are extending their support through the digital screens.

Let’s see who they are and what they have tweeted in support.

Diljit has been consistently tweeting in support of farmers since the very beginning of the protest, and recently his active support on Twitter turned out to be little heated when actress Kangana Ranaut had called out an aged ‘Dadi’ for being available for Rs. 100 in protests. In return, Diljit gave her befitting replies one after the other in Punjabi. Many are seen saying “Diljit ne to Dil Jeet Liya”!

WWE Indian wrestler Khali also joined the farmers’ agitation at Tikri border, chanting slogans with them in support, video of which was later uploaded through his own Instagram handle. 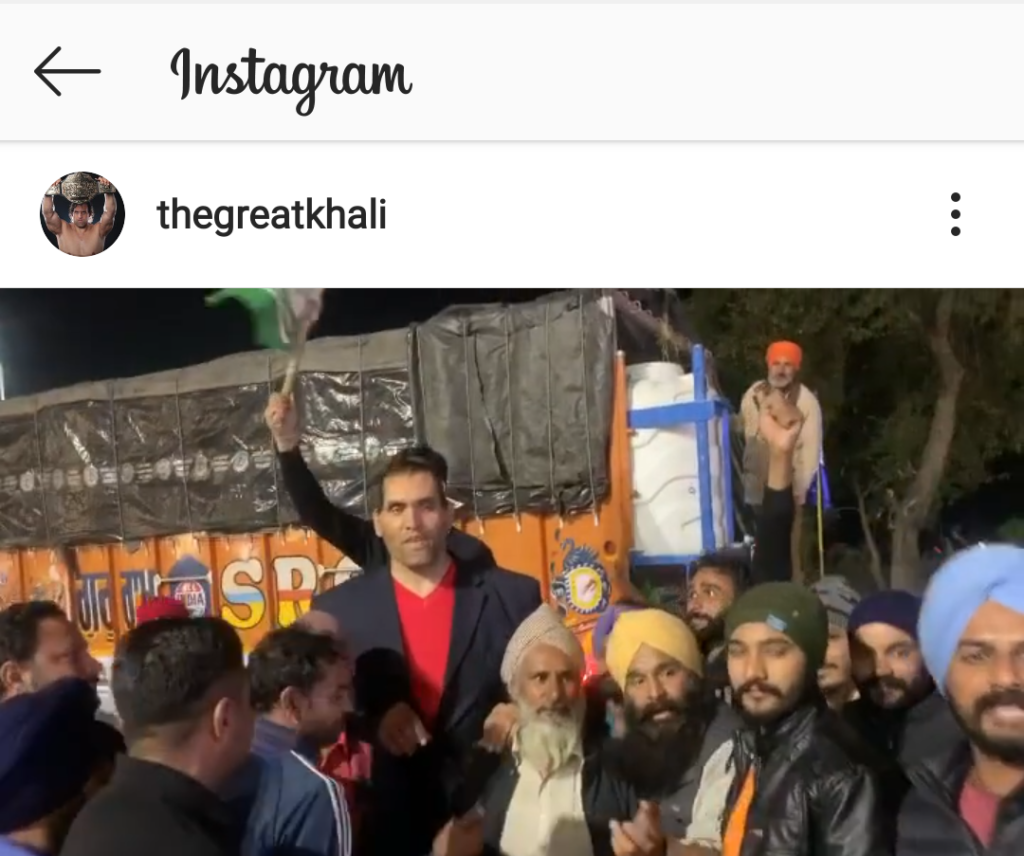 Famous Punjabi singer Gurdas Maan extended his support to the protesting farmers by uploading a picture of himself in which he is seen in Kisaan avatar readying to harvest the crops. His tweet read, “Kisaan Hai, teh Hindustan Hai”. (India exists only because of its farmers)

Actor-comedian Kapil Sharma, with his tweet, reiterated to show some mercy on protesting farmers and wrote that the protest should not be tarred with any political colour, instead the government should try to negotiate with them because no issue exist that can’t be resolved with a discussion.”

Earlier this week, Swara tweeted a video showing farmers being rained upon with water cannons mercilessly while trying to make their way into Delhi. She expressed her grief over the brutality.

What is this?????? What kind of cruelty are we unleashing on the people who grow our food?!?! Horrendous!!!! #FarmersProtest https://t.co/7UV8TA0m0s

Taapsee hit out in the most sarcastic way, saying let’s “Boycott Food”.

Chalo now let’s not waste time and quickly #BoycottFood come on twitter you can do it 💪🏼 https://t.co/vXaVsTjdMq

Former Indian spinner requested the state machinery to not use forces to crack down upon the suffering farmers, rather listen to their demands patiently.

Former cricketer and current politician, Sidhu gave a shout out to the Centre to listen to the farmers respectfully as their actions against the laws are very appropriate and also democratic.

Triumph of the Punjabi Spirit…
Kisan Morcha is Democratic, Pristine and Non-violent… Any Attempts by agencies to foil it – Will fail… Punjabiyat is our shield, Universal Brotherhood our philosophy and driving force! pic.twitter.com/zxey0T9SoU

She has put a question to ponder upon, in which it is asked if farmers deserve to be heard by the authorities. She also didn’t hesitate to state that any protest against a unfavorable law is in itself political and that upholds the democratic right.

Of course the #FarmerProtest is political! How else, does a section of aggrieved people put their point across in a democracy ? Protests against any legislation, are inherently political.
Don't they deserve a hearing from the political leadership of the country?

Punjabi actor-singer Ammy Virk has been regularly keeping his followers updated with information about the protests happening in the US in view of what’s happening back in India, and also reminding them to not forget the ones who provide us daily with food.

Angad Bedi retweeted a very heart-touching quote shared by his father, which says, “We will need farmers every day, three times a day”. Nothing could be more encouraging than this in sharing solidarity with the protesters.

We have already seen much of Sonu Sood’s altruism during lockdown but there is more he has to offer from his end, this time simple and straight in just a line.

Jazzy B has been strongly supporting and asking other to support the cause of farmers fighting for their rights through tweets.

Singer Gippy Grewal posted a strong picture in his tweet indicating that no matter how much cruelty they show, Sikhs will always serve them unconditionally in need, with “Support Farmers” hashtag.

Singer Himanshi Khurana mocked at the government for allegedly using Kangana as its pawn to keep throwing distractions when any serious issue arises in front, signalling the ongoing farmers protest. She ended with “Kisaan Mazdoor Ekta Zindabad”.

After a lot celebs from Punjab had come in support of farmers, now some famous celebs from even Bollywood have started giving strength to the dissenting farmers through their tweets.

The actor left a tweet earlier this week filled with gratitude for the contributions made by farmers towards the nation.

If you eat today, thank a farmer.

I stand in solidarity with every farmer in our country. #JaiKisaan

PC has honored the Indian farmers by entitling them as ‘Food Soldiers’ of the country, and put her point demanding the issue to be resolved soon.

Our farmers are India’s Food Soldiers. Their fears need to be allayed. Their hopes need to be met. As a thriving democracy, we must ensure that this crises is resolved sooner than later. https://t.co/PDOD0AIeFv

Former Miss Universe and Bollywood actress wrote a heartfelt note on her Instagram story handle in support to the farmers, in which she mentioned that she revered them as her God. See below;

Starting with the words with words like ‘No farmers no food’ and ‘respect farmers’, She wrote, “Without farmers, we wouldn’t have access to food and other basic necessities. Take a moment to really appreciate this profession and all the hard work and dedication the farm life requires”

“Farmers are the backbone of our nation. They need our respect not Sympathy and we shall give it,” she added.

She asked us to rethink on why prices of vegetables are constantly souring when we go out to buy them next time, because this isn’t only a farmer issue but everything is connected to India’s agrarian economy.

Next time you shop for vegetables, (which u will soon irrespective of where u live or how much meat/fish u eat), don’t wonder why the prices for vegetables are constantly rising. India is still an agrarian economy. It’s not just a ‘farmer’s issue’. Everything is connected. https://t.co/8CAF9xcsIs

The actress wrote in her tweet that her heart went out to the farmers’ families protesting in this bone-chilling winter, and she is still hopeful that some resolution would come out soon.

My heart goes out 2the farmers & their families protesting in the cold in this pandemic.They are the soldiers of the soil that keep our country going.I sincerely hope the talks between the farmers & govt yield positive results soon & all is resolved. #Farmerprotests #Rabrakha 🙏 pic.twitter.com/b7eW8p8N3P

The actress shared a quote by Daniel Webster, saying that the farmers are the founders of human civilisation.

"When tillage begins, other arts follow. The farmers, therefore, are the founders of human civilization." Daniel Webster 🇮🇳 https://t.co/26mfnHGZki

She was seen in her tweet requesting the government to listen to farmers’ issues as “No farmers = Barren land”, she said.

No farmers = Barren land ! Our land is a Blessed one , so should be OUR Farmers’ lives !!!! Requesting the government to understand their issues and favour them ! 🙏🏻💛

Above are the celebrities who had enough spine to speak out at least via social media, while the top Bollywood star brigade still seems to be in hibernation. We hope that others also join hands in support towards farmers, in whichever way possible to them, and the farmers get their justice soon.