Decoding the communal fallacies between the two identities – II

What enrages a Gullible Hindu mind? Are the Staunch beliefs really corroborated with facts or hyperbole intended for political mileage? TSA brings you an Essay series that attempts to debunk erroneous and Staunch beliefs hovering upon the radical Hindu minds about Muslims in India.

Lately, the communal divide which has been smoldering within the hearts of every Hindu and Muslim from years has appeared more discernible. Time and again political parties have fueled the dying embers of the communal furnace turning it into a raging fire that has ruined thousands of innocent lives.

Inside the mind of a credulous Hindu, disquiet has been instigated through constant badgering of Hindu chauvinism, further widening the schism among Hindus and Muslims. This article is the Part-II of our series Decoding The Communal Fallacies Between The Two Identities. The series scrutinizes the most prominent aspects that a radical Hindu believes as a threat to the existence of Hinduism so that we conciliate the widening divide.

The rapidly increasing Muslim population and higher fertility among Muslims compared to their Hindu counterpart is among one of the most crucial issues that have been falsely propagated, developing a sentiment of fear and turmoil in the mind of the naive Hindu populous. This article attempts to debunk the myth of the Muslim Population Bomb popularized by extremist Hindu outfits.

The narrative of the Muslim population bomb is among one of the various agendas that have rattled the gullible minds of the Hindu population. The idea has been propelled by multiple Hindu interest groups explaining how the Muslim in the country will expand to 92.5 crores, while Hindus will shrink to 90.2 crores by 2035. By 2040, Hindu festivals will no longer be celebrated. There will be large-scale conversions and genocide of non-Muslims, and by 2050, the Muslim population will increase to 189 crores and India will become a Muslim country. The exodus of Kashmiri Pandits from the valley in the early ’90s is cited as a typical consequence of population disparity and atrocities bound to befall on every Hindu in the Muslim reign. Several Hindu leaders have urged the Hindus to have at least 4 children while some even exaggerated the numbers to 10 children.

Let us perform a rational analysis of the veracity of these claims.

In the early decades of independence, the Muslims were in a destitute condition, lagging far behind their Hindu counterpart in both educational and social reforms. This resulted in unawareness about the need for family planning, and this is believed to be the major driving force in the High Total Fertility Rate (TFR) among the Muslims. Another factor crucial to this High TFR (the number of children a woman produces in her child-bearing age) was the majority of the Muslim population was living in the urban areas, thus having better access to health care services. The mortality rates in the Muslim population were 12% lower than Hindus. Although the trend of high TFR among Muslims is experiencing a shift after 2000.

The survey also found that education is an extremely crucial factor in the determination of population growth. The fertility rate among the poor and illiterate sections was much higher compared to the economically prosperous and educated section.

During the reign of UPA, a committee was formed to study the social, economic, and educational conditions of Muslims in India, known as the ‘Sachar Committee’. 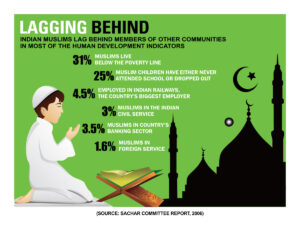 The finding of this committee suggested the condition of the Muslims in terms of backwardness were below the Schedule Castes and Scheduled Tribes with a mere 2% representation in government jobs and TFR was 10% higher compared to their Hindu counterparts. Although the very same committee predicted that the population ratio will be approximately 17% to 21% by 2100 because of the increasing trend of education and awareness about family planning.

If we discuss the issue of the exodus of Kashmiri Pandits then we would find that the exodus was not a consequence of some conspiracy hatching through population disparity but the circumstance for the political and social crisis that began building up since the early 1960s. And, during preceding years the political configuration of the state and the centre also began to struggle because of the intrusion of India with the autonomy of the state constitution and lastly the electoral malpractice in 1987, was the final nail in the coffin, shaking the ordinary people’s faith in the elections and the democratic process. The longstanding pattern of misgovernment in the region exasperated the Kashmiris, and somewhere along with all this, explicit religious tone and sentiments for accession to Pakistan gained prominence.

On 19th January 1990, despite opposition from the state government, New Delhi appointed Jagmohan Malhotra as the Governor, and in protest, the state government led by Chief Minister Farooq Abdullah resigned. The state went under the President’s rule. The exodus of Kashmiri Pandits began on the same night.

The very next day of appointment of Jagmohan Malhotra as Governor by the Government of India, the Gawkadal massacre took place wherein a bid to control mass protest by radical Muslims, CRPF fired at the marching protesters, killing at least 160 people. This led to full-blown ‘Kalashnikov Culture‘ in the valley. The Kashmiri Pandits were the ones who bore the brunt of this political turmoil.

Now the state has been trying to repent their mistakes of the past by inviting Kashmiri Pandits to return to their homeland and even offering incentives to them as the reparation of their losses. So on the platform of rationality, the Muslim population bomb is nothing more than a hoax and has been a purely fictional conspiracy theory manipulated by the radical Hindu group for the publicity of their Hindu supremacy ideology.

Literature As An Instrument of Propaganda

Learn the Truth about India’s Lynching History in the…

Kerala: Policeman Pins Protestor To The Ground In George…