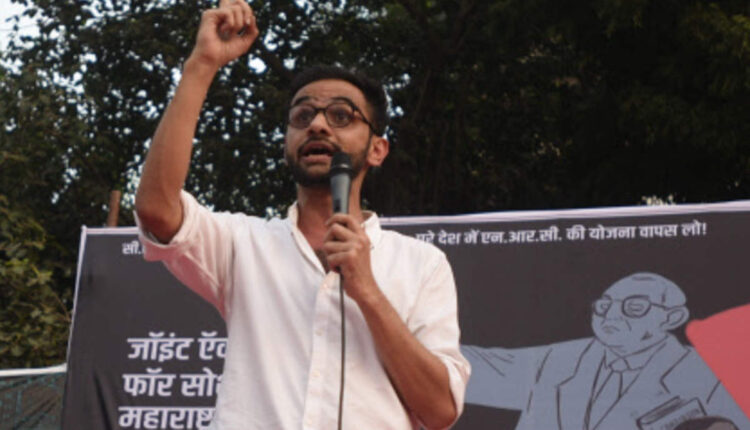 Indian govt. loves to hate Muslims activist. Umar Khalid’s case is not new to the country. Another attempt to corner the activists and silence the voices of those who dissent against the government. The Delhi police have been trying to weave a false story by naming few people who participated in the anti-CAA-NRC protests.

By Benjeer On Sep 14, 2020 Last updated Sep 15, 2020
0
Share
“We will react to hate with love. When they threaten to hit us, we will hold the tricolour flag. If they shoot us, we will embrace the constitution. If they jail us, we will walk in singing Saare Jahan Se Achcha Hindustan Hamara.”
These are the words of Umar Khalid, an activist recently arrested by the Delhi police for Delhi riot conspiracy under UAPA. Even though Muslims were severely effected in riots but the police claim it was the result of a conspiracy by Muslim activists and leaders. Yet another act of political vengeance against those who actively spoke truth to power, especially Muslims.
Umar Khalid who holds a PhD degree in history from Jawaharlal Nehru University has emerged as a strong and powerful voice of young Indians in favour of the constitution and democracy. In the year 2018, he was targeted by a gunman who open fired at him outside the constitution club in India.
Umar Khalid’s case is not new to the country. Repression of Muslim voices has become a symbol of the fascist regime. Several activists who held the peaceful anti-CAA protests are still behind bars for opposing the government‘s anti-minority policies. The continued incarnation now lead to the student activist Umar Khalid.
Among the charges, Umar had allegedly given provocative speeches at two different places. Parts of speeches are in the public domain. With that, he joined the likes of two politicians, two academics and a filmmaker. Earlier Swaraj Abhiyan leader Yogendra Yadav, CPI leader Sitaram Yechury, economist Jayati Ghosh, DU professor Apoorvand have been named for Delhi riots conspiracy.
Intellectuals have claimed that Delhi police have become more vindictive with every passing day and witch hunt of innocent is on. A barrage of tweets and statements from individual institutions supported Umar and expressed their outrage over the arrest of the student activists.
The hashtag #StandWithUmarKhalid was trending on Twitter to support the constitution believer. BJP with the arrest of Dr Khalid unleashes worst attacks on Muslims with garnering vocal opposition.

Umar Khalid's arrest is a travesty. Every day he spends behind bars is a day too many. Another chapter added to one of the most vindictive investigations by @DelhiPolice pic.twitter.com/S2QKEhhSaw

Academics, activists and lawyers have condemned the arrest of Jawaharlal Nehru University alumnus Umar Khalid under a draconian law for his alleged role in the northeast Delhi riots, describing it as a witch-hunt against one of the voices who spoke for constitutional values.

Shocked that an anti-terror law UAPA has been used to arrest a young, thinking, idealist like @UmarKhalidJNU who has always opposed violence and communalism in any form.
He is undoubtedly among the leaders that India deserves.@DelhiPolice can't detain India's future for long.

Hours after the arrest of activist Umar Khalid in connection to the northeast Delhi violence, BJP leader Kapil Mishra on Monday, 14 September, congratulated the Delhi Police on their action, saying that people like Khalid, Tahir Hussain and Khalid Saifi among others had brought about a “planned massacre” and that “these terrorists and killers” should be hanged.

The leaders of Bhartiya Janta party like Kapil Mishra, Anurag Thakur and Praveen Verma who are much involved in threatening violence has so far gone uninvestigated. The real accused of the Delhi program who openly challenged Muslims to shoot refer Kapil Mishra’s speech, roam freely.
The government may not admit it but this back-to-back witch-hunting of Muslims and collective fury is a projection of Hindutva agenda. The world will not be shocked if we further move towards holocaust and final solutions.
The recent days’ situations of India can be compared to Germany in the 1930s and 40s. The leaders of the RSS and BJP are greatly inspired by Hitler and Mussolini. The Bhakts of India are impressed to the degree by the fascist regime that they don’t mind the fact that their freedom had been taken away and culture have been destroyed. Further replaced with barbarism and polarising ideology.
The leaders think that they would rule India forever and will continue to extract a horrific cost in terms of economic, political and social. The attack on free press continues.

You can watch the full speech here:

Celebrating Ayushmann Khurrana’s 36th Birthday- Recalling some of the best movies of the Versatile actor!