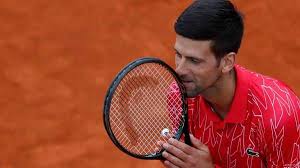 World no.1 Djokovic has tested positive for Coronavirus. Apologizes for the mishap in the exhibition event.

Novak Djokovic, the World no.1 tennis player has tested positive for Coronavirus along with his wife, Jelena, and fellow players  Grigor Dimitrov, Borna Coric, and Viktor Troicki after an exhibition event he organized in Croatia. The tennis star apologizes for hosting the events.

The 17-time grand slam champion said he was sorry that the tournament had caused harm and acknowledged “we were wrong and it was too soon.” The first stop of the Adria tour was hosted at the Djokovic’s tennis center on the banks of the Danube in Belgrade last week which was attended by about 4000 fans daily, while a similar crowd attended the Zadar events.

Djokovic has defended the event saying it was supposed to be a philanthropic event and all health standards were met while hosting the events but it was too soon.

“I am extremely sorry for each individual case of infection. I hope that it will not complicate anyone’s health situation and that everyone will be fine. I will remain in self-isolation for the next 14 days, and repeat the test in five days.”

The organizers said that the remainder of the Adria Tour had been cancelled, the two-day event on July 3-4 in Banja Luka, Bosnia, and the planned exhibition match with Bosnian Damir Dzumhur in Sarajevo on July 5.

World no.40 Nick Kyrgios has criticized Djokovic, calling it a boneheaded move. The players seemed to play basketball and to party together bare shirted while ignoring the social distancing norms before the events.

Safoora granted bail, still not innocent in the eyes of Justice

Out of 50k ‘Made in India’ ventilators, only 6% under PM Cares Fund