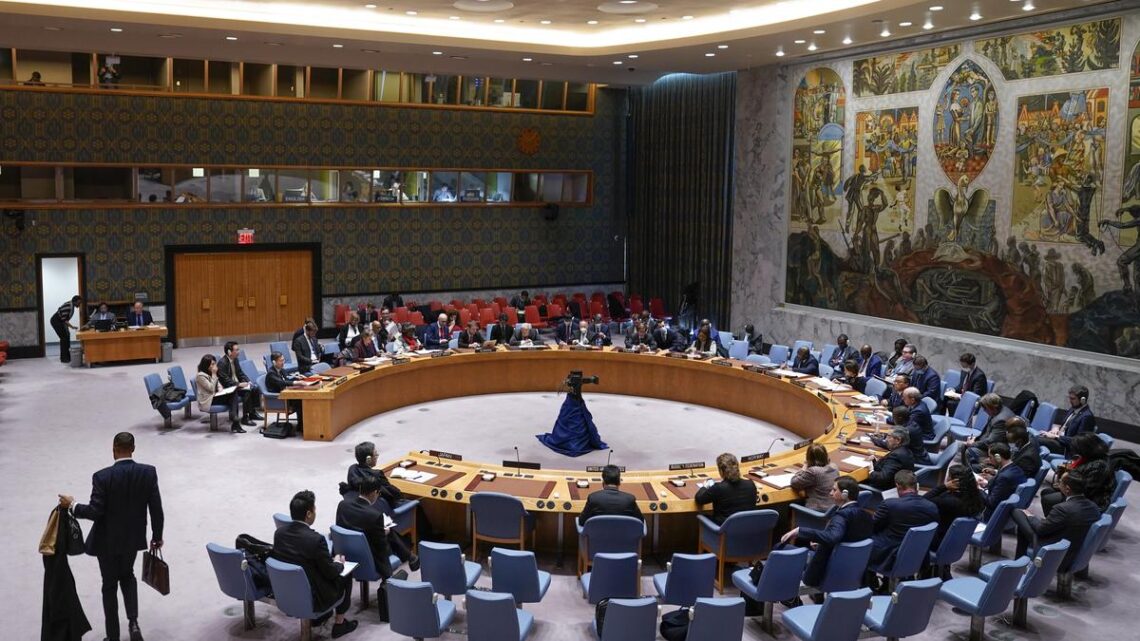 
India, China and Russia abstained in the United Nations Security Council on a draft resolution that demanded an immediate end to violence in Myanmar and urged the military junta to release political prisoners, including State Counsellor Aung San Suu Kyi.

The 15-nation Security Council, under India’s Presidency this month, adopted the resolution Wednesday, December 21, 2022, after 12 members voted in favour, none against and India, China and Russia abstained.

This is the first Security Council resolution adopted on Myanmar in 74 years. The only other UNSC resolution on Myanmar was in 1948 after the country formerly known as Burma got independence from Britain when the Council recommended to the General Assembly “that the Union of Burma” be admitted to membership in the United Nations.

India’s Permanent Representative to the UN Ambassador Ruchira Kamboj, presiding over the meeting, delivered the explanation of the vote in her national capacity and said New Delhi believes that the complex situation in Myanmar calls for an approach of “quiet and patient diplomacy”.

She said any other course will not help in resolving the long-standing issues which have prevented enduring peace, stability, progress and democratic governance.

“Under the current circumstances, we are of the considered view that a UN Security Council resolution may entrench the parties in their inflexible positions rather than encourage them to pursue an inclusive political dialogue.” Kamboj, however, asserted that India strongly calls upon all parties for an immediate cessation of hostilities, abandon their extreme positions and immediately initiate an inclusive political dialogue for the restoration of democracy. “Political leaders should be released and allowed to resume political activities,” she said.

India underlined that the UN system should assist the parties in dialogue so that the state of emergency comes to an end and Myanmar returns to the democratic path.

“It is therefore important to carefully weigh actions by this Council. Quiet and constructive diplomacy is the desirable recourse to seeking constructive and enduring solutions in Myanmar,” Kamboj said, adding that the consequences of instability will affect the neighbouring countries the most and it is therefore important to consider their views and perspectives seriously.

“In view of these concerns and our firm commitment to the democratic process and the well-being of the people of Myanmar, India decided to abstain on this resolution,” Ms. Kamboj said.

Ms. Kamboj noted that India shares a nearly 1,700 kilometres-long border with Myanmar and has historical and cultural links with its people.

“As such any instability in the country impacts us directly. Resolving the current crisis and maintenance of peace, stability and prosperity in Myanmar is therefore of direct interest to our national security. The welfare of the people of Myanmar remains our utmost priority and is at the core of all our efforts,” she said.

The resolution reaffirmed its support for the people of Myanmar and its strong commitment to the sovereignty, political independence, territorial integrity and unity of the country. It demanded an immediate end to all forms of violence throughout the country and urged restraint and de-escalation of tensions.

It reiterated its call to uphold democratic institutions and processes and to pursue constructive dialogue and reconciliation in accordance with the will and interests of the people of Myanmar and urged all parties to respect human rights, fundamental freedoms and rule of law.

The resolution acknowledged ASEAN’s central role in helping to find a peaceful solution to the crisis in Myanmar in the interests of the people of Myanmar and encouraged the international community to support the ASEAN-led mechanism and process in this regard, including ASEAN’s efforts in the implementation of the Five Point Consensus.

Ms. Kamboj complimented the United Kingdom delegation under Ambassador Barbara Woodward for having negotiated the text of the resolution in a “transparent and consultative” manner by taking into account the views of neighbouring countries, in particular the ASEAN and keeping their concerns on board.

Ms. Woodward said the resolution sends a “clear message” that the Security Council is “deeply concerned at what is happening in Myanmar at the hands of the military and the so-called ‘state of emergency’ imposed to oppress the people’s calls for peace and democracy.”

She said that since the junta “violently seized power” in February 2021, they have conducted a brutal campaign against the people of Myanmar – burning villages, running indiscriminate airstrikes, torture and mass killings. “We stand with the people of Myanmar. It is time for the junta to return the country to them,” the UK envoy said.

The rights organisation noted that the Security Council has issued statements of condemnation of Myanmar in the past. “This resolution represents a significant escalation of the council’s engagement on Myanmar and offers a basis for sustained future monitoring of the situation in the country,” Human Rights Watch said.

“China and Russia’s abstentions signal that even the junta’s few friends have lost interest in sticking out their necks to defend its atrocities,” UN director at Human Rights Watch Louis Charbonneau said.

“The building blocks put in place with this resolution offer a starting point for reinvigorating pressure on the junta among Security Council members and governments across the globe.” Chinese Ambassador Zhang Jun said Beijing has concerns about the draft resolution and feels it would be more appropriate for the Council to adopt a presidential statement rather than a resolution.

“There is no quick fix to the Myanmar issue, let alone any external solution. Whether or not it can be properly resolved in the end depends fundamentally and only on Myanmar itself. Neither democratic transition nor national reconciliation can be achieved overnight, and both require time, patience, and pragmatism,” he said.

Russian Permanent Representative Vassily Nebenzia said it is Moscow’s principled position that the situation in Myanmar does not pose a threat to international peace and security. “We remain convinced that the situation in the Rakhine State should remain the only Myanmarese aspect on the UNSC agenda. In this regard, promotion of anti-Myanmar initiatives in the Security Council is both inappropriate and counter-productive,” he said.

Myanmar’s Permanent Representative to the UN Ambassador Kyaw Moe Tun said later that the National Unity Government of Myanmar welcomed the adoption of the resolution.

“We are clear this is only a first step. As such, the National Unity Government calls on the UNSC, building on this resolution, to take further and stronger action to ensure the swift end of the military junta and its crimes. The Security Council’s work only begins with this resolution,” he said.